Time to watch an F1 driver at his best.

Jenson is at the table again

I like Hulkenberg’s reactions in that video while Jensen is tlaking about skipping testing in Bahrain haha.

I really like Ricciardo. He just missed the glory days of Red Bull. Shown he can take it people like Vettel, just needs the car because he has the hunger.

Hamilton all out of sorts. A Mercedes missing Q3! And Bottas barely hanging with the Red Bulls until finding a good time right at the end.

Kimi flyin’ out there and gets pole. Ferrari should have an easy one-two tomorrow if nothing huge happens.

McLarens like the slow circuit, have to wonder what Alonso could’ve done this weekend. But he’ll be busy turning left 800 times.

whatever that is, it says it is blocked.

Polekatt Open it on YT, not the embeded video on the forum.

So far so good. Finally watching a race live, no family programs

Easy enough one-two as predicted. Vettel and Ricciardo benefit from the overcut. Kimi can’t be too mad though, Vettel was absolutely flying once he got the place. Max on the other hand has a little more room to complain. Mercedes salvages what they could even with losing the podium. And bad luck for Toro Roso losing a car at the end when they were having a good weekend. Force India shut out but have still had both cars finish every race. And finally Haas stumbles into a double points finish.

I’d say Button left his mark on the race eh?

Well if FIA had any doubt that an aero formula sucks. Today should prove it again, sadly they won’t learn.

That Button move was amazing and fun

How did Haas do?

Only 13 driver finished the race 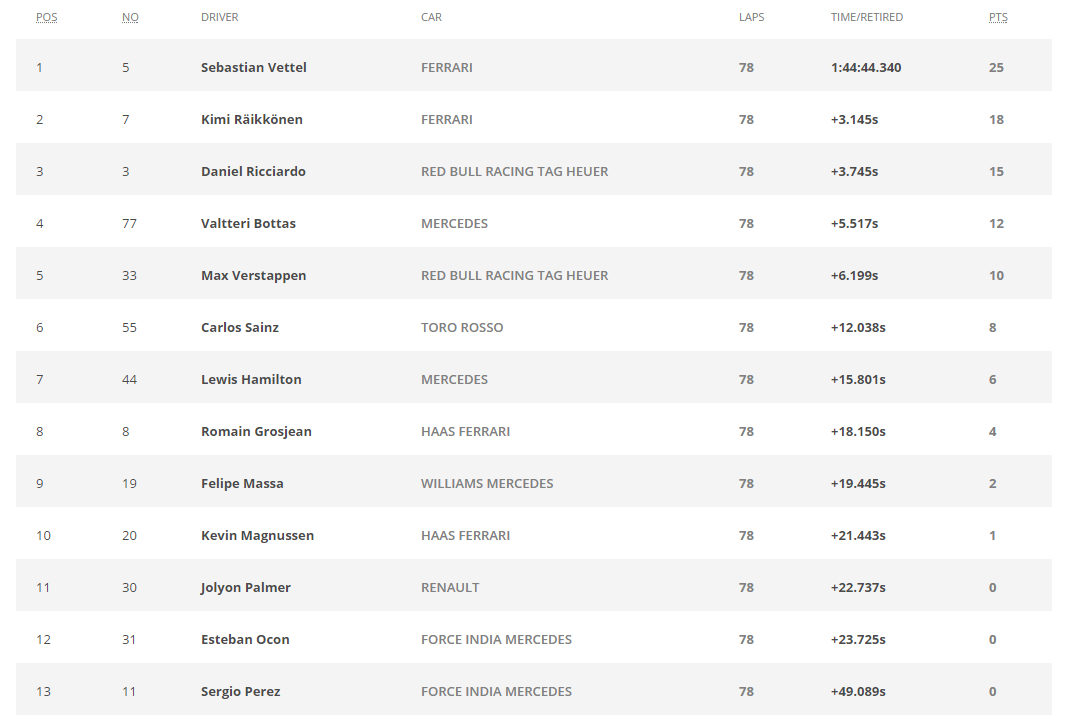 Anybody peek in on the Indy 500? Poor Alonso. I think that big crash and red flag hurt all those Honda engines that blew up. He had the fastest average speed and was in the pack that had a shot at winning. Honda engine still won the race too. Gotta say, even as a full blooded American I still don’t quite get oval racing, but it was still a fun spectacle.