For Honor is on sale half off for anybody that may be interested. 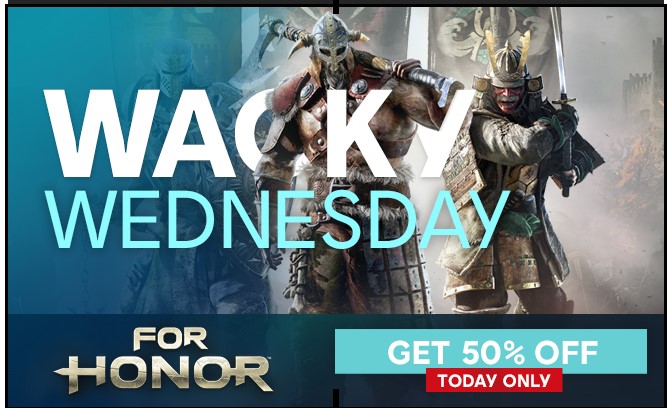 I thought that game fizzled out…which i suppose explains the sale.

gord0 the player base is suuuuper low

EDIT: I don’t want it anymore. It’s not on sale for me xD

It used to be great, now they ruined it

syncrosis What did they do?

katsuo
Noobisoft…They created it, it’s enough to be ruined. XD

katsuo they changed how some of the characters play.

katsuo The game has been out for a long time now, to go and change random things with characters this far along is dumb. And it’s not even big things like a move I can unfairly use etc. it’s more like my character has a fight stance I use a lot, then randomly they decide to change the mechanics of the stance in a patch a week ago, completely ruining how I used the player. Just dumb stuff like that.

And yea for players who are new or don’t play a lot, it’ll be really hard for you to defend against some of the DLC characters who spam a lot. I don’t have issues bc I’ve put a few hundred hours in and know what to look for… I just think changing things this late in the game is so dumb, unless it’s fixing bugs etc. Just bad decisions.

katsuo and I’m really disappointed only because I loved the game prior to these things happening. It was very different from anything out and extremely satisfying as you get better at it. Really epic duels etc.

Oh and yea the player count is really low, that said, it’s not that big of deal because the highest lobby capacity is 8 total, and a lot of times I’m playing 1v1 Duels or 2v2 Brawls, so even if there aren’t a lot of people online, I’d connect instantly to games like this.

So basically the game has some balancing issues. That sucks. Also, Steam says there are 1200 players playing every day. I don’t find that really low to be honest haha

I think I’ll buy the game if it gets a nice sale. I like Ubisoft games XD

From what i remember, ubi held a tournament and streamed it live. The winner used a game-breaking exploit to win. When they talked to him when he won he said “don’t ever patch it!”. Ubi couldn’t edit it because it was live.

shiftysatchmo Armor only comes into play in 4v4 modes. It’s off during 1v1 duels and 2v2 brawls except for aesthetics. That said, they have hundreds of hours of experience, so he’d need to campaign, train a lot, cry a lot, then win. Also, there would be an influx of some noobs if others bought it during a nice sale like he would… hopefully the game would match him up with those people but lolllll who knowsss

gord0 There were a few. One character has insane reach with a spear and she has a secondary stance. Used to be when she’d transition to that stance, you could be point blank swinging at her and the hits wouldn’t be landing, then she’d crush you. So she could keep you at a distance, yet if you were able to make it close, she’d be invincible. I still wonder how these things get by testing without being fixed… like really blatant, obvious things that make me wonder if they test more than a few hours lol… these aren’t hard to come by things.

Well this has many more comments than I expected.

Wait…you can be a skeleton for the Halloween event. Buy it now.