As I’ve mentioned in the past I have a couple of friends (Trainsmash being one of them) who I have been gaming with for years. Our game of choice is Borderlands 2, but we get burnt out on that easily. We’d all been fans of the Tom Clancy series’ previously Splinter Cell, Rainbow 6, Ghost Recon. So we’d been watching the latest batches of releases from Ubi with interest, and then as we played each beta we found ourselves more & more despondent.

Siege was not what we were after, as competitive multiplayer is not our scene, we were interested in a co-op, mission based game.
The Division - seemed a promising blend of RPG & modern shooter, but became too bullet spongy & the failure to live up to promises killed that for us.
GR:Wildlands looked to provide as with more of a squad shooter atmosphere & an open world for us to be ourselves & create havoc. So we decided to dip our toes & give it a go.

We assigned each other callsigns - derogatory, but on the surface Macho-Military (-ish).
I became Vegas. In NZ we have a city called Rotorua, it’s a thermal wonderland full of geysers & mud pools. It was pointed out that my personality is somewhat full of hot air, liable to erupt & overall pungent. Rotorua is lovingly referred to as Roto-Vegas and so I achieved the callsign “Vegas”.

Trainsmash became “Glitter” - primary reason his first name is Gary… and he seems to have an obsession with sparkly pink unicorns.

Our final squad member was “Ice Man” - he is a huge fan of Batman & it was only fair to pick on his least favourite movie - with Val Kilmer in the lead, added to the fact he despises Tom Cruise & especially hated the Top Gun movie, Ice Man was a shoe-in.

So armed with callsigns we headed off into Bolivia - or at least what Ubisoft determines to be an accurate representation of it. Straight off the bat I can say that the map is huge & the countryside looks gorgeous. Overall the character models are good but what I’m seeing is a couple of instances where in cut-scenes the facial animations don’t gel or my character appears to be to busy staring at the tele-prompter for her next line, with her eyes flicking to a different focal point or generally staring at a random corner. Dialogue is at the level of an action movie, the squad banter is done well during non-scripted times, but you run into repetition very quickly. Scripted dialogue is pretty bad, with some truly facepalming moments, such as when one of your “covert” operatives rebukes a bribery offer with “Do you know who I work for? The United States of America, think you can match that money?”, before knocking the suspect out & moving on.

So, I can’t tell if the squad is supposed to be dismantling the cartel from the shadows, without giving away that it’s the USA interfering with another country’s internal issues, or overtly creating a war of terror on the cartel. I believe that regardless of your method of play the results will be the same.

But back to the 3-man wolfpack… we’re as close to dangerously inept as you can hope to find. We don’t work well as a team & communication revolves more around laying blame in the after action as opposed to working together to formulate & pull off the perfect assault. And let’s be honest, that’s the way we like to play it. The game is blast when you’re worried less about completing a mission and instead focus on racing 3 vehicles to the next staging point, when one is in a 2 cylinder tractor, another is in a helicopter attempting to fly under the bridges & the third has just seen a Lamborghini drive past & must have it. It allows the group of us to play as an anarchic, hot mess and it allows the game to transcend the stale, sterile, paint-by-numbers modern shooter that proliferates gaming these days. It is a combination of Far Cry, Just Cause & Battlefield, that gives you the freedom to make the game interesting.

I’d like to use this thread for myself & Trainsmash to post plays of the day style commentary & screenshots to share our journey through Bolivia & our battles with the Santa Blanca cartel.

At this stage the game is buggy as all heck, which helps with our amusement, but the NVidia Ansel screenshot tool currently causes the game to crash for Trainsmash & on my PC it creates a lag for about 3minutes where I can hear all the action but my screen is frozen until it catches up. This means until we work out a decent screencap tool pics will be a bit thin on the ground.

THe one Ansel screenshot I took that then froze my PC for 3minutes: Meet “Vegas” 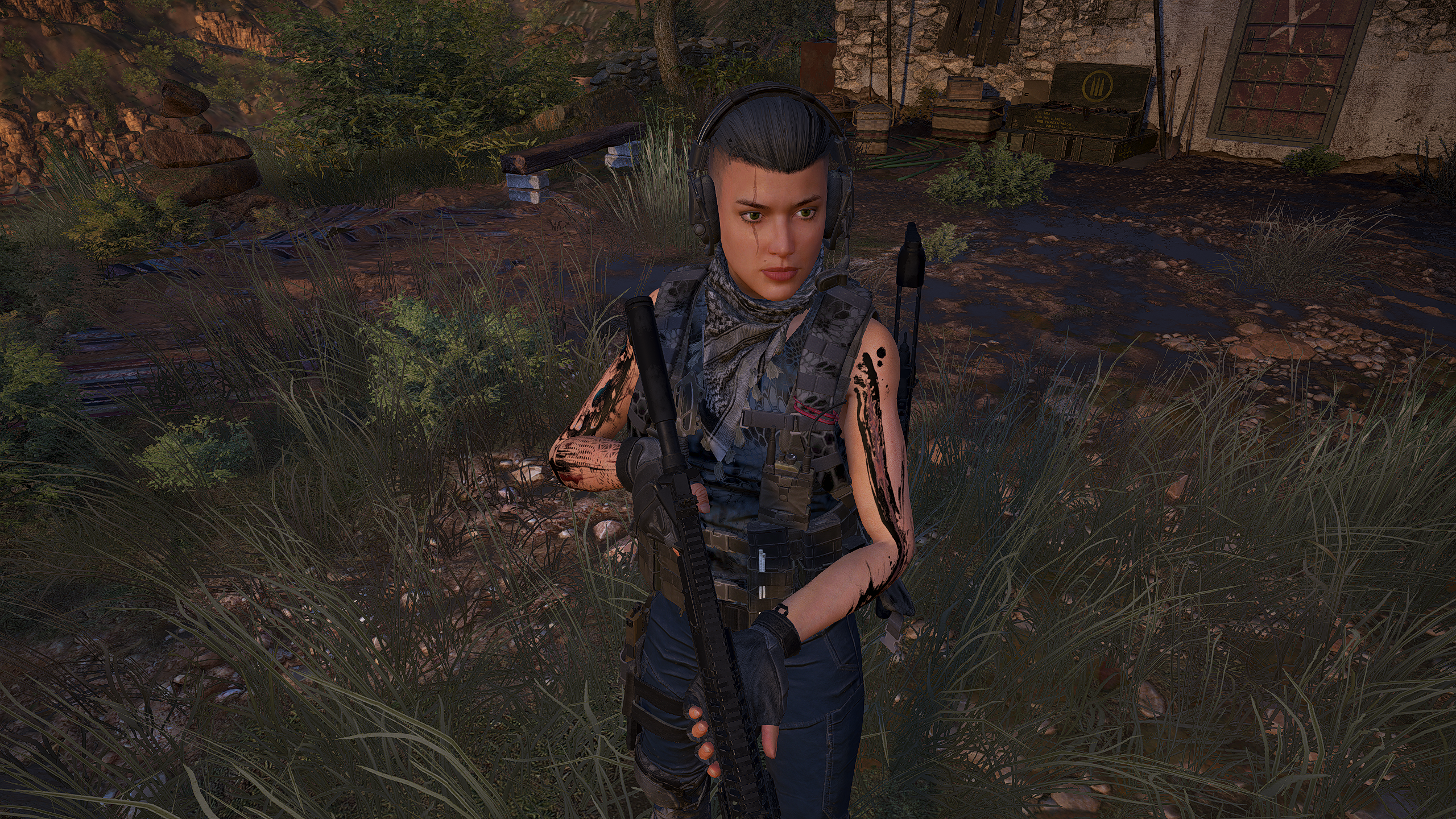 I sooooooooooo want to play Wildlands now. For some reason, every Ubisoft game I tried recently was excellent and I’m pretty sure Wildlands is excellent as well. I’ve been playing Siege and that one is pretty damn good. Also there is a terrorist hunt mode in siege where you can play against AI. Check that thing out if you don’t want to play against people.

Also, too bad Vegas has undercut. Otherwise I’d be interested in her haha

Katsuo Bad news, she’s stuck with the undercut - I could put a boony hat on her if that helps?

It suffers from the same-same feel that Far Cry 3 & 4 suffered from, without all the hunting to divert your attention. That’s why I recommend it as a fun open world chaos simulator with friends. By yourself it just takes itself too seriously to make it better than Just Cause or GTA.

But hats off to Ubisoft, the country they’ve created is gorgeous, and the weather & day-night cycles are phenomenal.

Sgt_T8ie I realized I’ve been a bit picky. I mean, she’s a freaking waifu with a gun! There can’t be anything better than that, right?! The undercut is just a small minus anyone can get over with!

I honestly can’t wait to start the journey in Bolivia with mah sic squad BamBam and PeaceLeon . I hope the AI isn’t as dumb as it was in beta haha

Katsuo Squad AI is awful - sometimes they’ll be taking direct fire & not be firing back.

Enemy AI is Far Cry 3 level of stupid. But they do take cover & call in reinforcements. Can’t work out why sometimes using unsilenced weapons doesn’t set the alert levels off.

Sgt_T8ie: I would like to Clarify that Iceman had the Ansel crashes and Ansel simply did not work when I hit ALT-F2. Having said that my keyboard was not detected last night, even by the BIOS (Bad Sign). Yes master race. I play with a controller.

More importantly, I nearly made the fly under the bridge stunt. In fact all 3 chopper accidents were spectacular.

Trainsmash note that Ansel doesn’t work for me when in gun sight mode - because ALT is the option to swap from iron sights to 3rd person.

Sgt_T8ie So know way of capturing the perfect headshot with the splatter then. 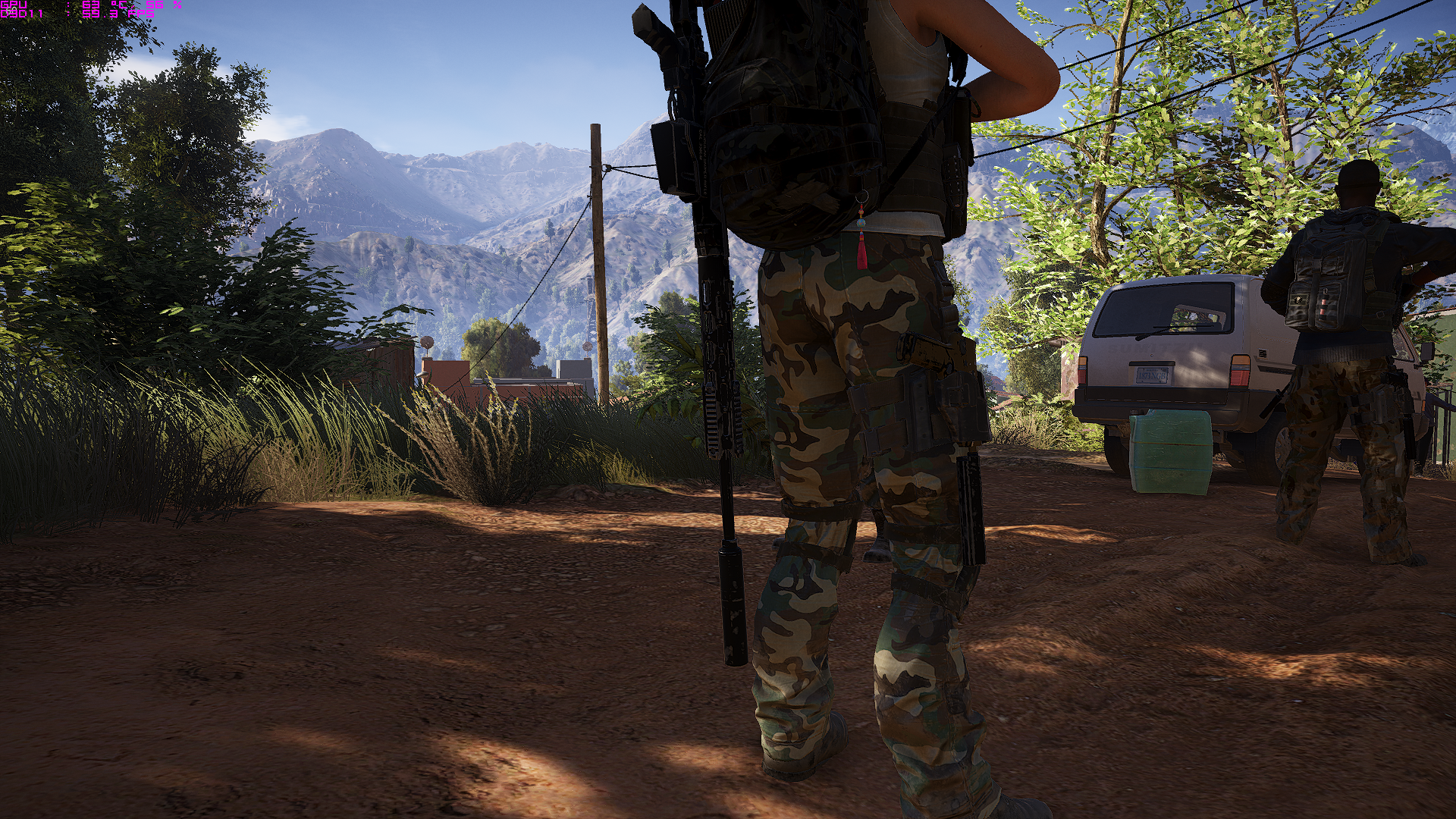 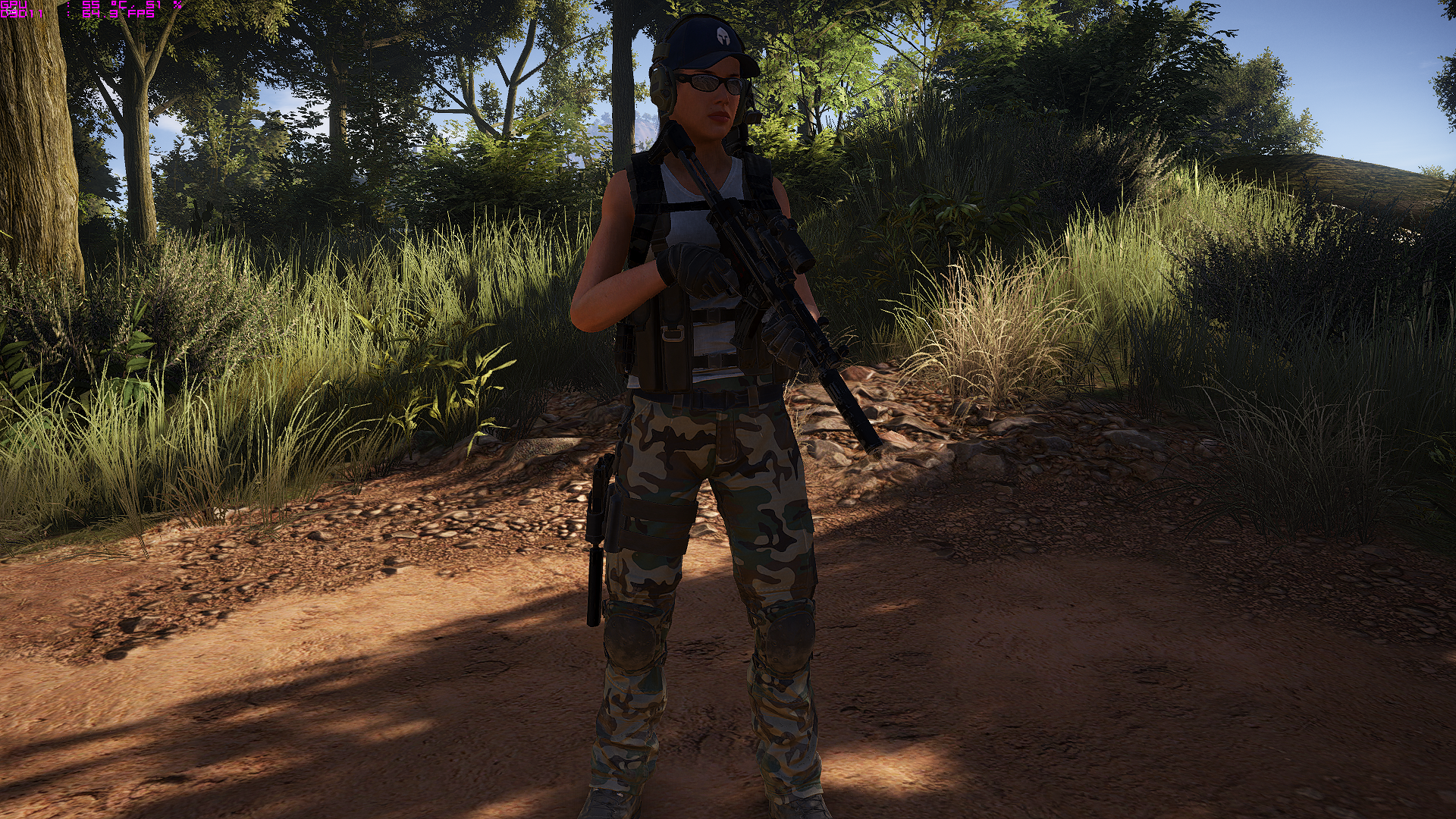 Sgt_T8ie So know way of capturing the perfect headshot with the splatter then.

Trainsmash I’m not sure - working on it though.

AI just killed the target I needed to apprehend. SIgh 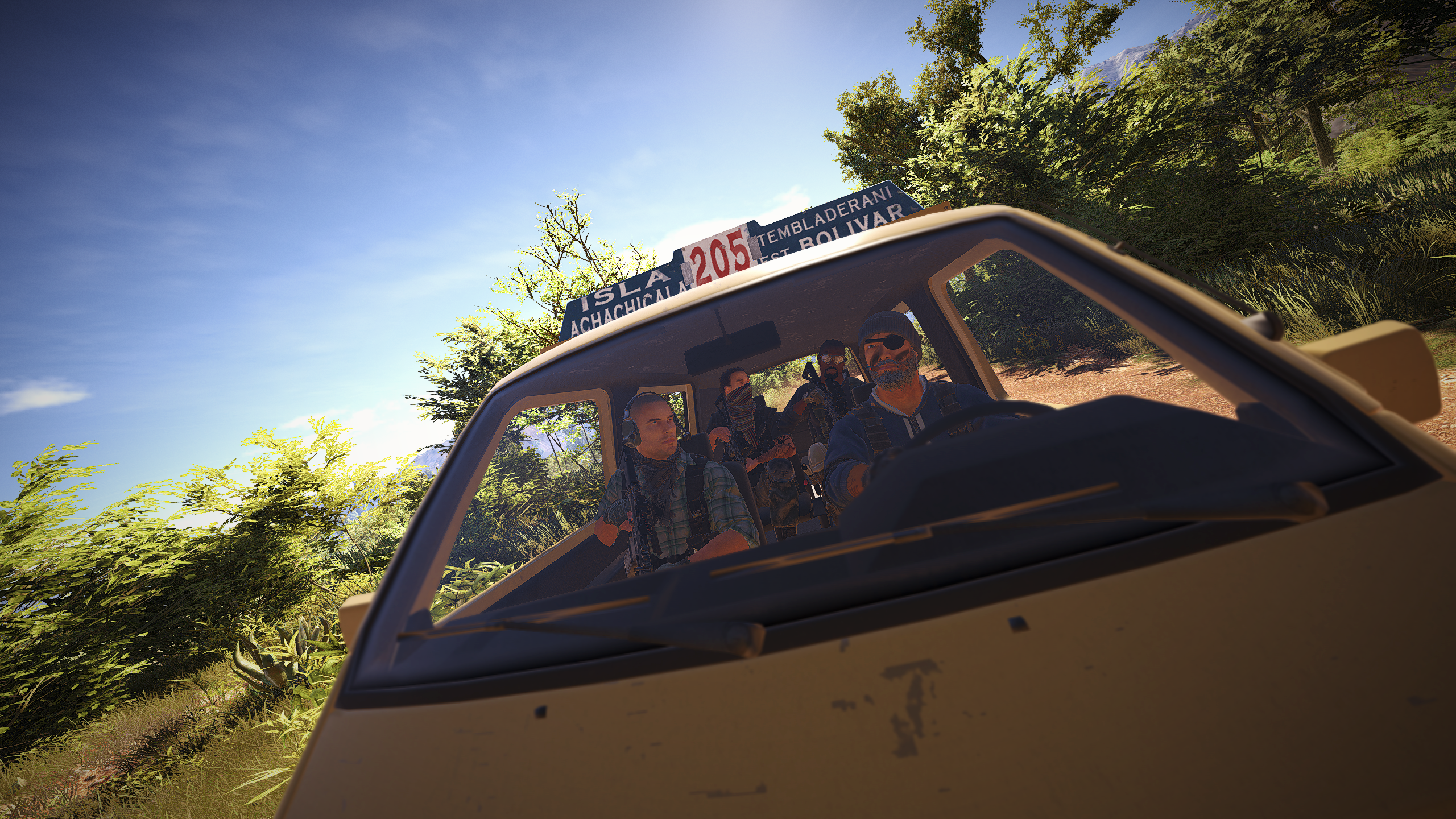 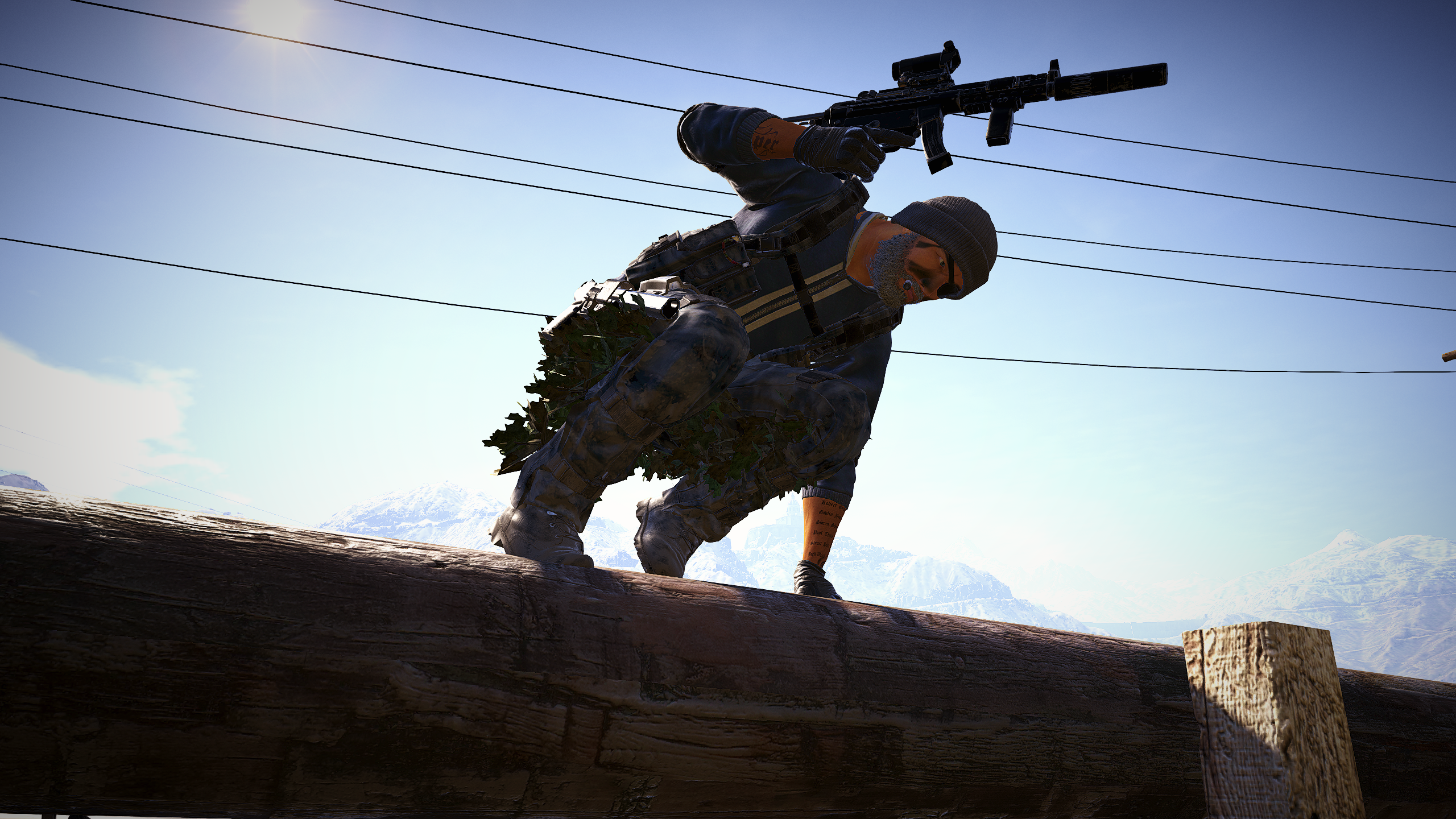 It is a team effort. 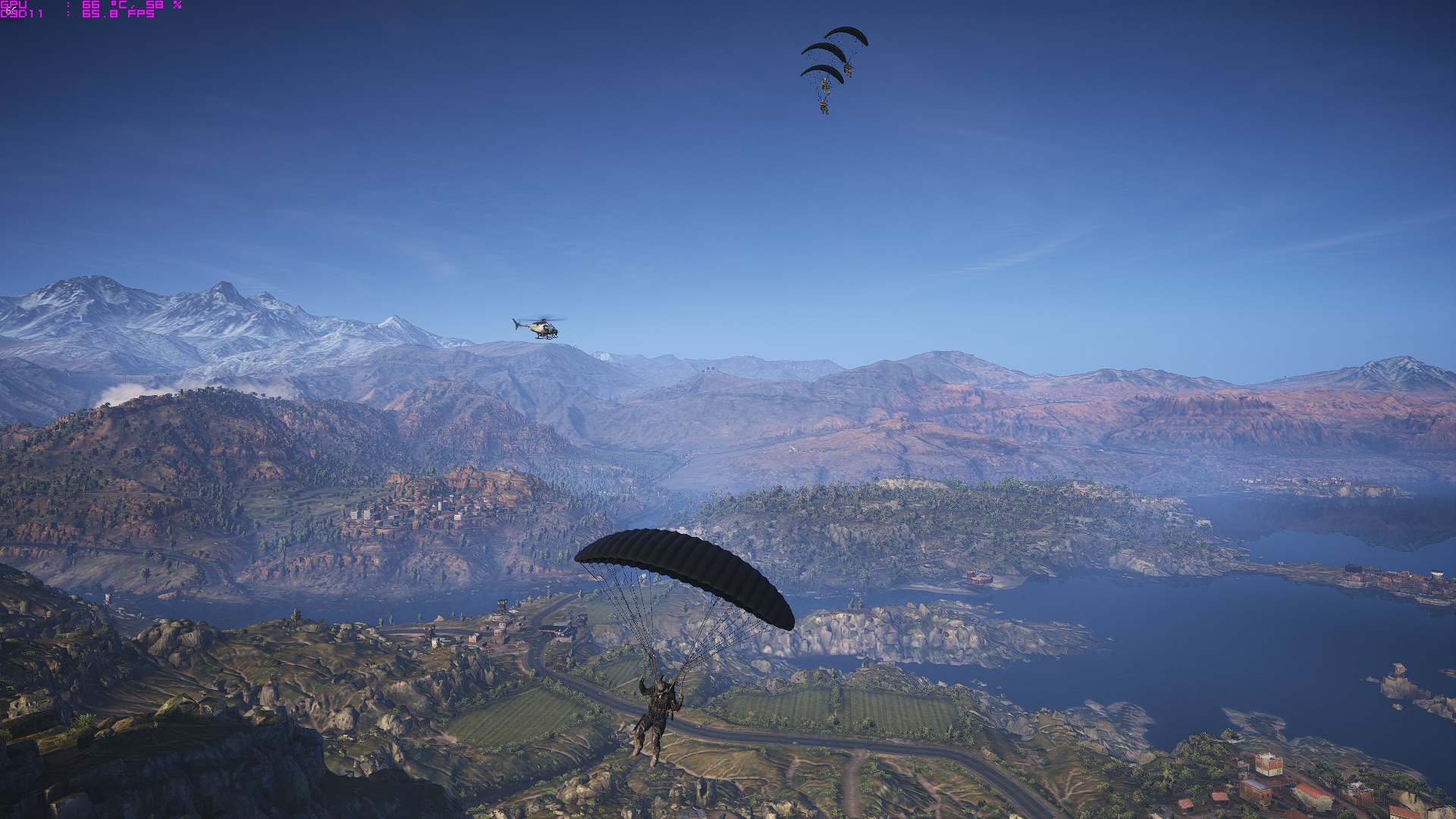 5mins of play through - enemy assault on our squad’s position, followed by the ongoing Ubi-ness of the title.

Sniping in GRW is simplistic - bullet drop over distance, but no wind effects etc.

Even though you can see a target you can’t necessarily tag them, making use of binoculars important to gauge distance.

The biggest issue is the game’s draw distance. Over 600m the targets are not rendered, unless you keep them in your scope… makes for a long slow backwards trudge back out to the distance you want to get. Luckily I can edit that out & just show the money shots