So GOG are offering everyone who owns Witcher 3 & all the expansions an upgrade to the GOTYE… not sure why seeing there’s no difference between them. However you actually get the GOTYE added to your account separately so I guess that’s pretty cool. 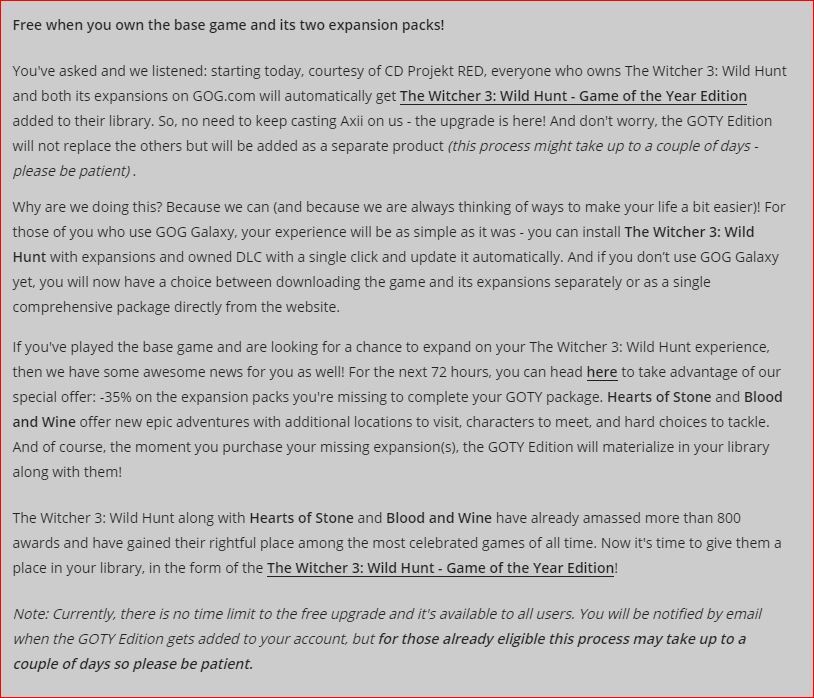 But with that announcement they sent out an email saying that in order to entice me they were offering a35% discount on the expansions. After the discount & the tiny rebate to account for the Australian price difference it came down to a 20% discount over purchasing the expansion pass bundle. So I bit & took the bait.

I’m such a sucker for a sale.

From what the forums are saying the bonus is that you can install in a single package as opposed to having to DL the main game, the free DLC pack, HoS DLC & B&W DLC… so I can understand that, but if I’ve already DL’d 1/2 of it anyway why would I want to reDL it?

You will love it. I will tell you a secret, I have not finished it yet, I just don’t want it to end so I return to it every few weeks and play a little. I can’t wait til the next book is released.

I don’t understand it either but I guess they are squeezing every penny out of the consumers/gamers for those DLCs with the GOTY bait. The game really deserves every penny though.

Thank you for the heads up. Got my copy.

jCARS I think in this case it was their customers complaining.

The complaints seem a bit unjustified & I don’t use the term lightly but for once it does smack of"gamer entitlement".

I only upgraded for the deal not the free copy.