GTA + Mad Max = ?!?!? A friend that lives across the country bought me Mad Max a week or so ago and we “raced” each other to see who could 100% the game first. Ended up suffering a glitch that eliminated my chances of getting 100% because it didn’t register a collectable in my achievements but showed it as gotten on the map. Oh well! Not usually big on meaningless trophies/achievements any way. Ended up for the better too as the game’s grind could really wear you down. But just finishing the game and its good story allowed me to JUST WALK AWAY on a good note. Originally posted on Steam here.

Not a ton of pics this go around, Steam overlay took exceptionally bad pics of this one, making things much much darker and ruining the color palette. I thought I took some amazing day time shots of the desert and dunes only to find them to be dark orangey poopy screenshots.

A fun, but sometimes tedious, casual stroll through an open world of the wastelands. 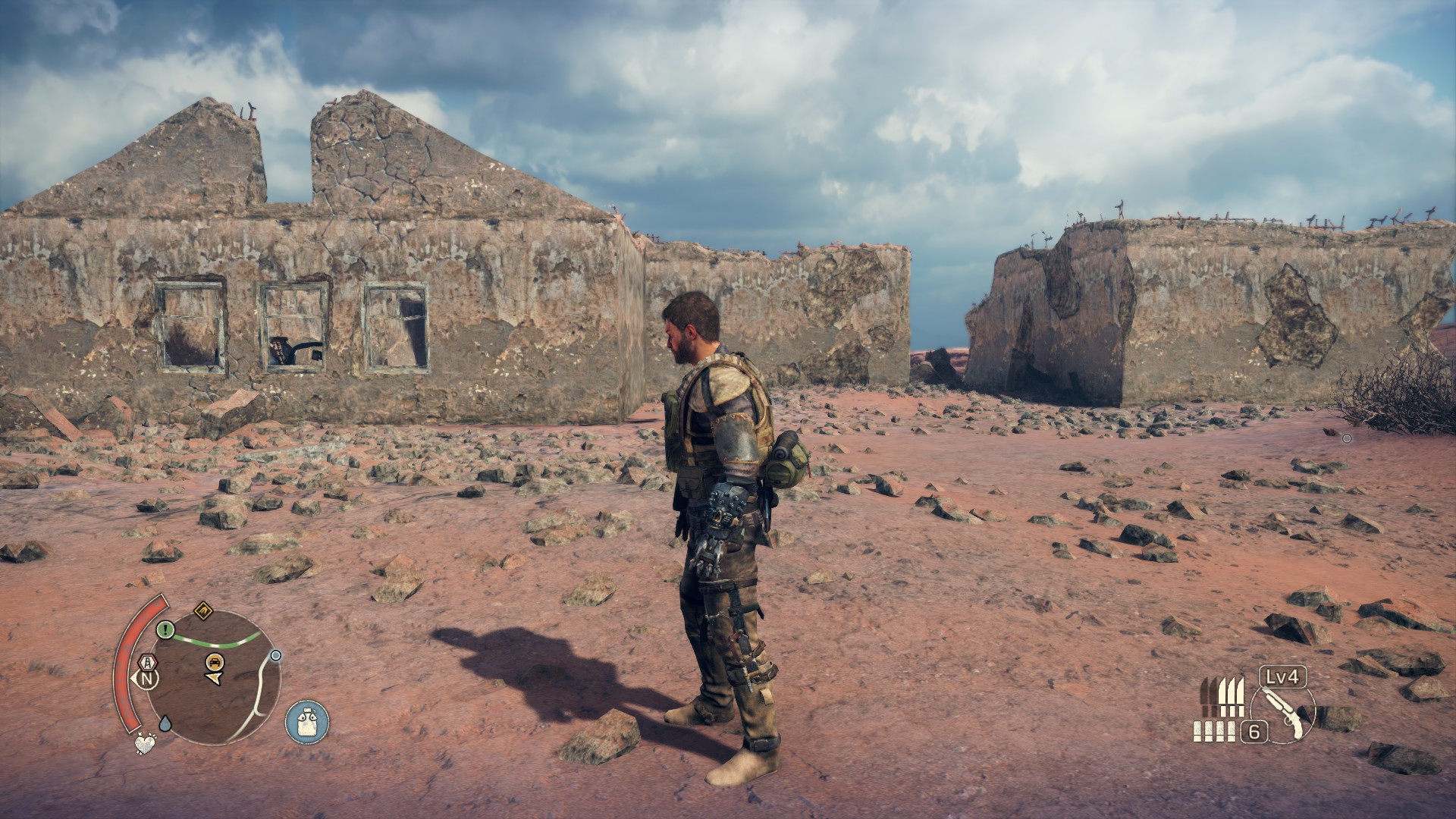 Never have the unforgiving wastelands of the post-apocalypse been so, well, forgiving… I never died in combat once during my playthrough. Whether through the rock’em sock’em “click X a bunch of times” fist fights or the bashing car chases. I just never felt in danger and really wasn’t. All my deaths were stupid human errors and accidental falls because of them. So we have ourselves a very very tame game here which doesn’t quite fit the desperate theme. But while missing the true challenge it still delivers loads of fun and a story that sticks to the Mad Max character quite well in my opinion. And as a fan of the movies, that story polished the gaming experience for me on a very high note despite some infuriatingly tedious gaming moments along the way.

The story both plays it safe and dares enough to stand on it’s own. Any references (some awesome subtle ones) to the quartet of movies are vague enough to not insult and keeps everything at a safedistance. This can easily be considered its own entity and universe with the same set pieces and character. It doesn’t HAVE to be considered part of the movies. And that’s where they did enough to do a still complete story that didn’t hang itself on adhering to the movies. All while still culminating in the Max I know and love. It worked well. Nothing award winning or something but; I liked it! 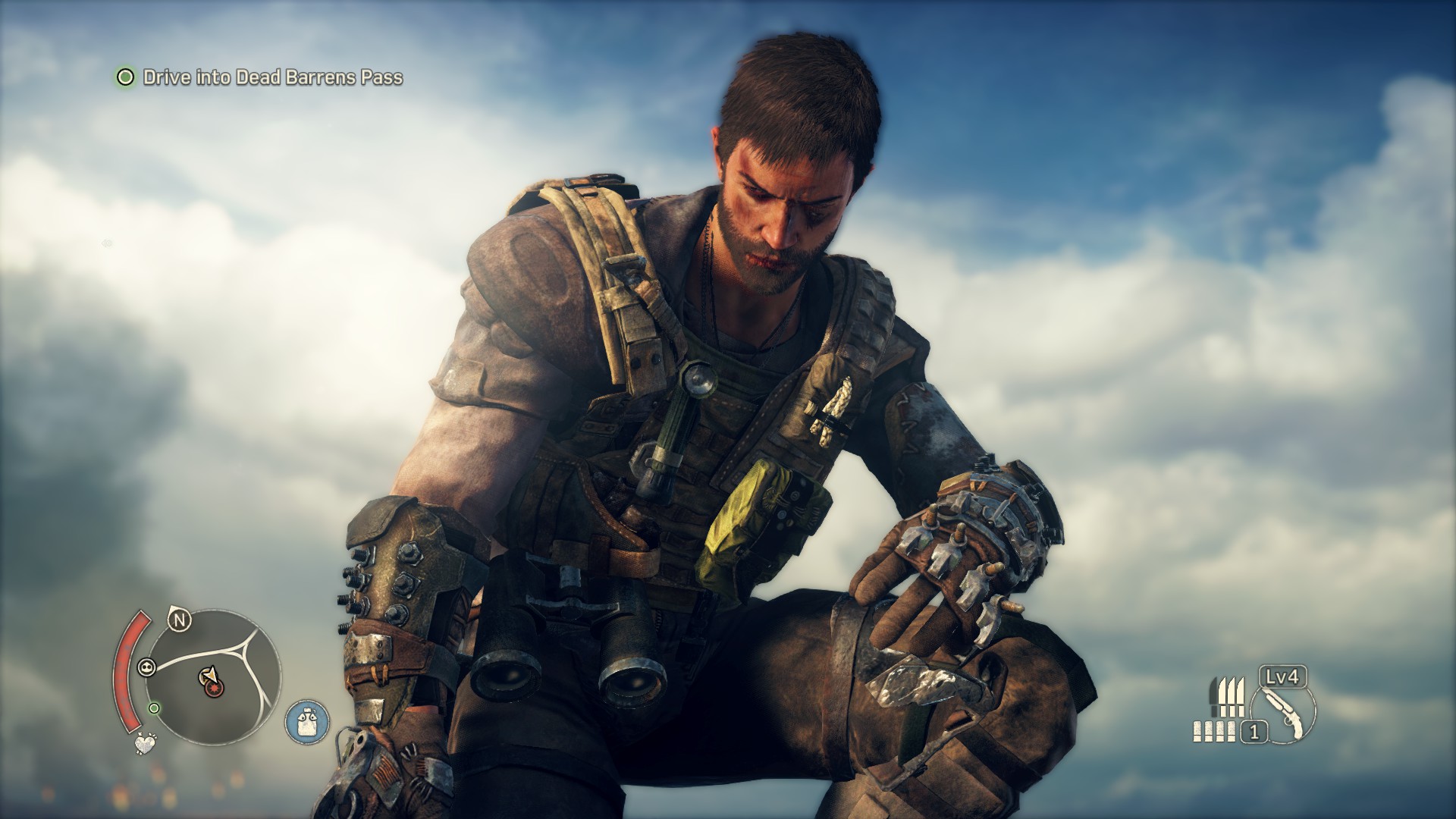 From a gameplay standpoint things get a little muddier and average. I really cannot understate how easy this game is. Go here, get that, bash a button to beat up guys in the way, earn scrap, buy new upgrades to make your bashing a button look more awesome, crash a car or two, bam you’re the Road Warrior legend! Its weird to call a game of this scope and this well constructed “average”, but it just is. The combat really is just one button with another to block and another to roll. Combos are more or less automatic based on timing rather than actual pattern input or anything resembling skill. And as long as you do a little grinding and side missions your car handles itself in battles just as easily. There is still a feeling of satisfaction to both situations though. So again, it works. The missions are mostly elaborate fetch and grab missions. Level designs of areas don’t do anything new. There’s nothing hard to find or difficult to beat. Its average. But that isn’t to be mistaken with “not good”.

Another issue needing mentioning was the pacing of the play. Getting over the idea of never feeling threatened you want to move things along a little quicker since you’re awesome and basically the Ayatollah of Rock n’ Rolla. But this game absolutely assaults you with tedium and parts that are entirely unnecessarily slow. And I mean sloooow. I’m old so I don’t mind “smelling the roses” and I’m not some kid with no attention span. This game is legitimately slow in parts. It can burn you out bad in long sessions. Anybody who has played it shudders if you mention hot air balloons, mine fields, or ’ ! ’ encounters to them. Words cannot express all the little things this game does to numb your brain by slowing the pace. So just a fair warning there. 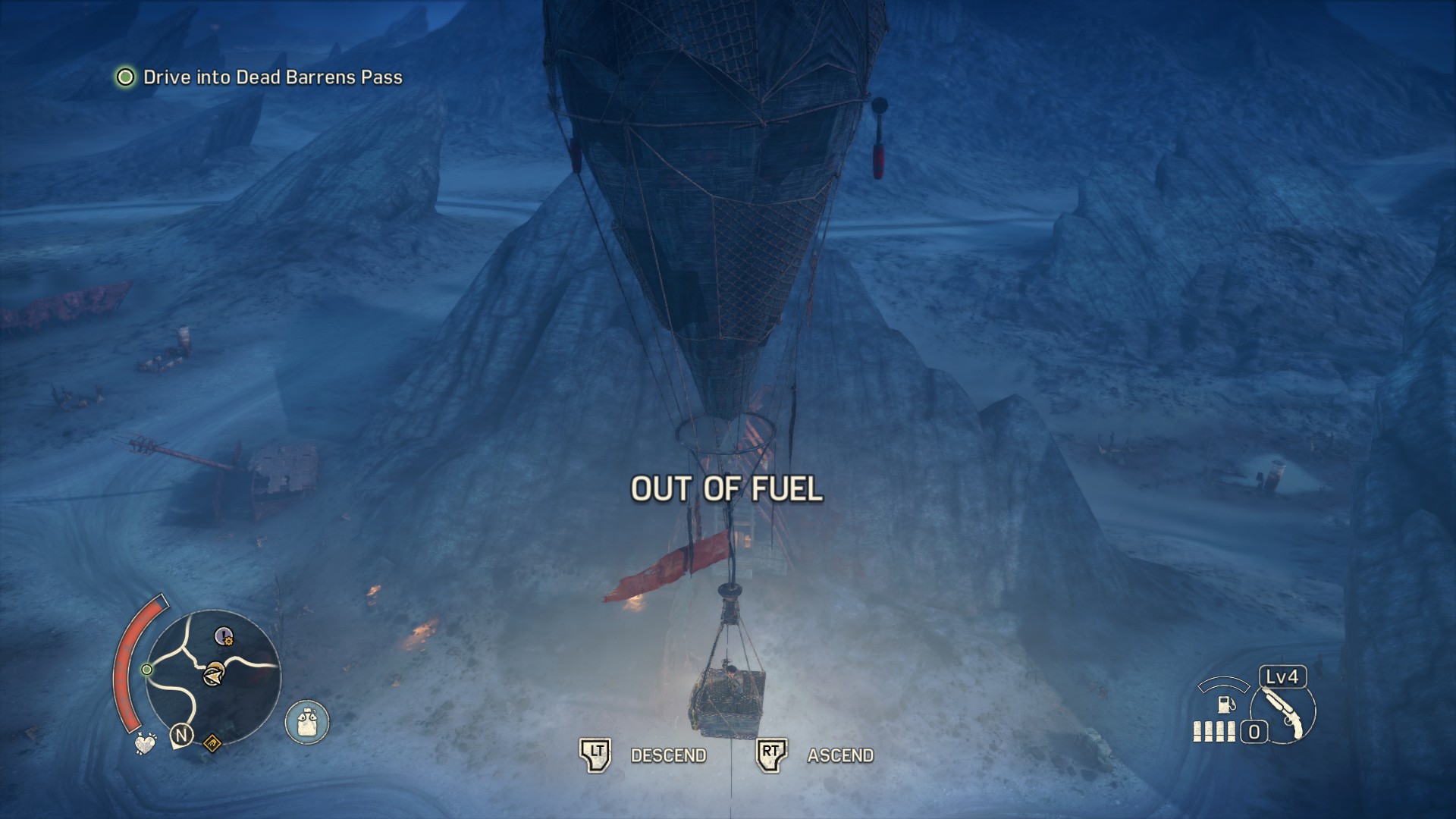 The game ran well on my toaster with no need for setup beyond turning off motion blur as a personal preference. It ran exactly how I like my games to; It just did! Never dipped in framerate or required any more effort than plugging in a controller (I can’t speak to the K&M controls) and clicking play. It wasn’t without a bug or two of course. But nothing more than could be expected in an open world game of this scope. Weird things are just going to happen in a game like this and anything too jarring is solved with a game restart in every case I ran into. A guy gets stuck on a wall, or a sound effect doesn’t play, stuff like that. Nothing big or game breaking. 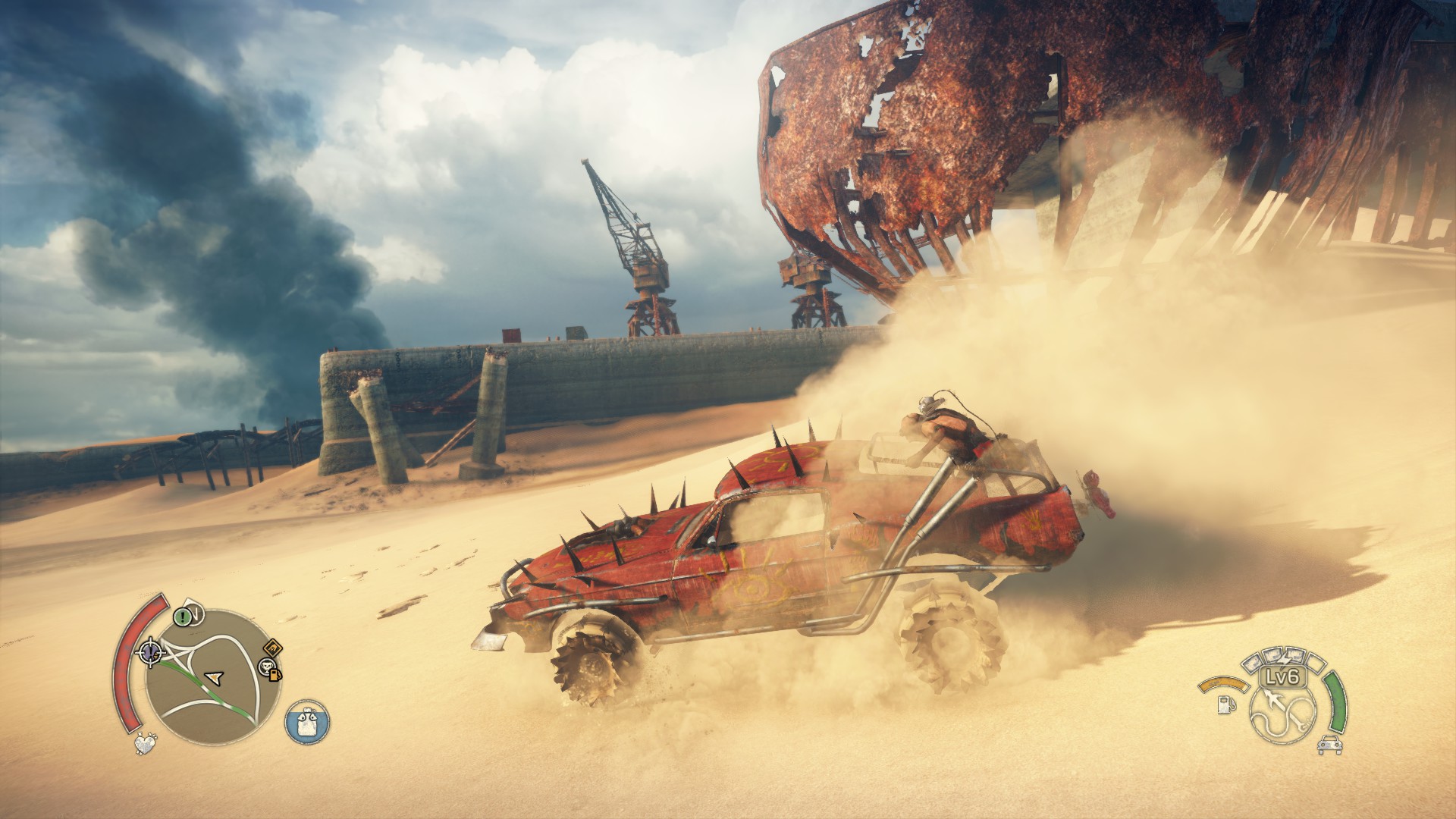 All in all I had loads of fun. I’m a sucker for the wastelands and they are well represented in their desolate dangerous beauty here. I never felt in danger of course, but I felt like I was still in the wastes. There were some greatly satisfying moments of play and the story delivered on all points to seal the deal and make me (mostly) forget the tedium. It is priced more than fairly compared to games of similar scope, but can be found on sales often enough to save the money and wait for one. Mindless fun in the best setting that I can definitely recommend! 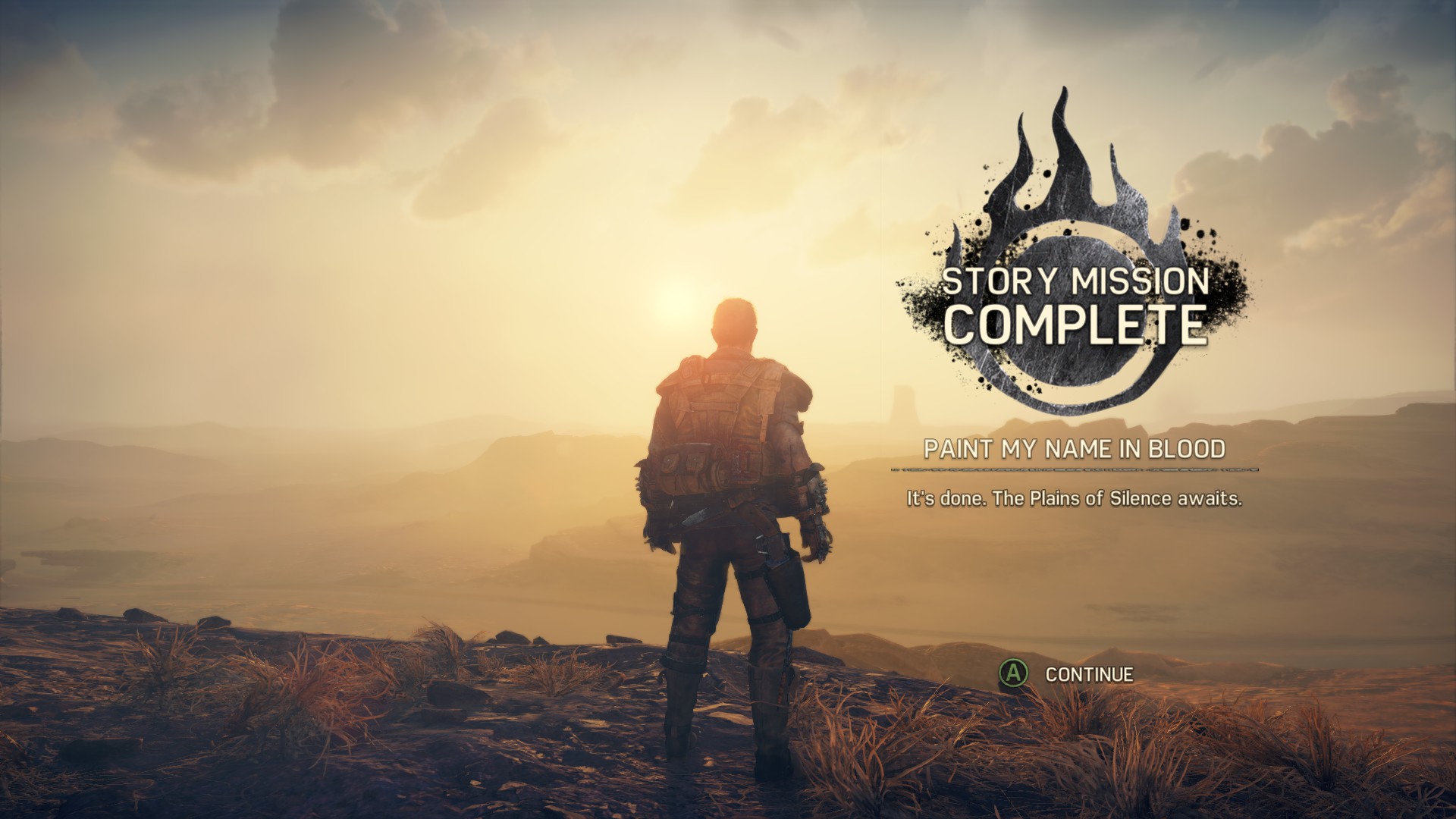 Other reviews I barfed up here;
Hand of Fate
Her Story
Odallus: The Dark Call
Ryse: Son of Rome

I haven’t been able to get through this game. It’s fun enough, but pretty repetitive and for some reason it makes me nauseous! Games usually don’t do that to me

It’s good game. Although I beat it fairly quickly I was satisfied with the gameplay. Yep, and I had the same glitch as you.

I turn off motion blur in all games. It usually doesn’t look that great and it makes me feel strange if I need to move a lot.

I turn off motion blur in all games. It usually doesn’t look that great and it makes me feel strange if I need to move a lot.

I think it looks awesome in some games

teh_g Yup, I do not like motion blur at all and its the first thing I turn off in games, especially FPS. Maybe except while like boosting in a Need for Speed or Burnout Paradise style arcadey racer it works for me. I’m kinda picky about depth of field too depending on how deep they actually make it. Mad Max has long viewing distances and I was ok with the depth of field and heat haze on that one. But they make these beautiful games and environments, I don’t know why they insist on blurring it all out! I wanna see the world!

ShiftySatchmo Yeah, the driving controls took me a good looong time to get over and used to. The camera is wonky as all heck. It really needed a manual “center view” button because the automatic view centering is weirdly delayed and some times doesn’t work and kick in until you play with the right thumbstick. And playing around with the right stick isn’t satisfying the way it responds most of the time. End up whipping around all over the place.

Zmajuga My glitch kicked in, I think, because I shot an isignia outside of a camp. But then when I went in it and shot another it showed “2/5”. So I figured I was good, but then at the end I had 76/77 insignias even though on the map they were all checked off when I hovered over every camp. Oh well. I scavenged every location and got all the “historical relics” and fully upgraded everything. So that’s “100%” enough for me! I got 42hrs out of it and my friend bought it for me on sale for like $8USD, pretty good price to playtime ratio.

The story both plays it safe and dares enough to stand on it’s own. Any references (some awesome subtle ones) to the quartet of movies are vague enough to not insult and keeps everything at a safedistance. This can easily be considered its own entity and universe with the same set pieces and character. It doesn’t HAVE to be considered part of the movies.

This actually goes right along with what the Mad Max stories are supposed to be, and once I heard this, everything made a lot more sense. According to the guy that started them all, ONLY the first movie is supposed to be absolutely true to the story. Since Max is something of a legend, all the other movies and games and stories are to be considered more like campfire stories, different people’s takes on what they have heard of the legendary Max. The person telling that particularly story is just telling what they heard, and it may or may not be exaggerated, or match other stories about him.

I’m a huge Mad Max fan, but still haven’t got around to playing this yet. But its in my library, and I plan to! Great review!

Polekatt It definitely can get boring/grinding/repetitive in parts, but if you like Mad Max you gotta play it!