New Potential Case for the future?

http://www.dunecase.com/index.html rumor is this case linked could run $189 - $200 and will be released for pre order Oct 19th. 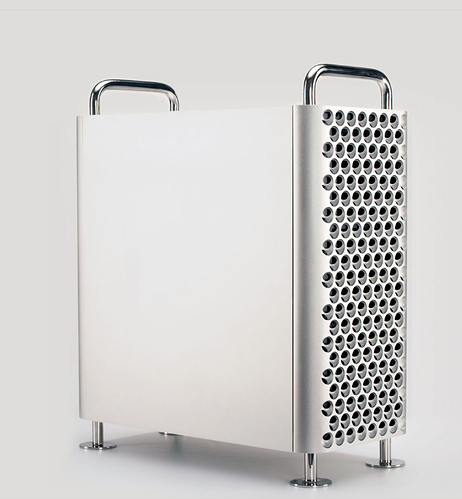 This is my laundry bin.

Check out the specs on it, this thing has some potential.

It doesn’t seem that much fancier than other cases. It looks kind of cool. The lack of USB A ports is kind of sad, since those are still super ubiquitous.

I do like the fact that they re-positioned the HDDs so there is more room for long graphics cards. That has been my main problem with standard cases I am trying to reuse.

But other than that, I see nothing else that isn’t already being accomplished in my present (10 yr old) case. In fact, I like the fan setup and I have now way better than this one, for airflow and quietness.

I don’t like that USB placement at all, that would be really cumbersome to get to. I prefer them on the front. That looks like something apple would do. lol

And lastly, I think its funny that they have to put “graphics card not included” on their website. hahah

EDIT: As I look at it again, how does the PSU placement work? where does the IEC cord attach. In looking at it, it appears that the PSU would end up backwards, as far as airflow is concerned.

So… its just a Mac Pro case for those that are wanting to look like they spent a small fortune on a Mac but actually have the functionality of a PC?

This case will make your PC look like a Mac, if that’s your thing

It's headed to Kickstarter on October 21.

That is why it looked so familiar.

I guess it is kind of cool though. I just imagine it will be like $300 for the case.

Hey, I was right on the price!

I did cave and get one. My Phanteks case is nice, so I may decide to cancel the Indiegogo funding still…

It does look like a nice and relatively small case. I think the big thing is that it seems to only have the front fan space, which would mostly be covered by my radiator (which would blow air in?) There is a single 80mm back fan slot too, but that seems like it’d have to be a high CFM fan to pull enough of the air out.