Heise.de publishes an article about Nvidia's new NDA; "only positive things in...

Nvidia requires the signing of a very extensive confidentiality agreement before providing information on future products. There is one topic journalists rarely talk about - so-called Non-Disclosure Agreements (NDA). NDAs are particularly common and...

"Sometimes companies clearly cross borders. On June 20, Nvidia USA sent an invitation to a large number of journalists - including us - to sign a very extensive confidentiality agreement “by June 22, 2018 at the latest”.

The NDA should apply to all information from Nvidia, so it did not refer to a specific product or information. There was also no concrete expiry date. It was also full of conditions that ran counter to journalistic principles. Our legal department clenched its hands over its head while reading the document.

It says (translated into German): “The recipient uses confidential information exclusively for the benefit of Nvidia”. In other words, journalists are only allowed to write what Nvidia fits in. Thus Nvidia degrades the independent press to a marketing instrument.

And it goes even further: “Notwithstanding the expiry of this agreement, the recipient’s obligations in respect of any confidential information expire five years after the date of its disclosure to the recipient”. Who signs this Nvidia-NDA, must submit thus for five years to the will of the American manufacturer - one publishes something in this time without permission, threatens the plaintiff.

They need to go

This is why I never buy from them.

Meh, it’ll be blasted over the internet and go away. Their video cards still kick amd’s ass 95% of the time.

So does this sorta inadvertently spill the beans that the rumored cards are indeed coming then?

So GPP didn’t work, let’s deceive another way. I mean they are on top, why actually go out of your way to lose customers. The decision makers need to have therapy. Maybe they just bored

Meh. Performance is performance. I’ll let the drama take care of itself.

Meh. Performance is performance. I’ll let the drama take care of itself.

AMD has Vega 64 which is pretty much the same as 1080Ti. The difference is… AMD are not assholes while Nvidia is doing everything they can to be assholes.

The legendary Vega 64 what nobody seen except some lucky and it is way slower than a 1080ti and in more cases slower than a normal 1080. But sure

Wait it is even more expensive than a 1080. But I guess you have that extra 100 dollars to buy a weaker but amd card

And never forget the electricity bill comes with them. Not trying to be a Nvidia fanboy but in the last 10 years I never saw why I should buy a AMD card. When it will be cheaper and stronger I will be the first to buy a new amd gpu. Until then even this shady nda wont hurt them. 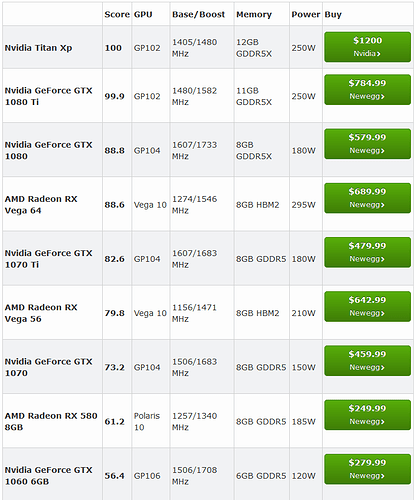 You can slap 2000 bench pics and I still won’t change my mind regarding both Vega 64 and 1080Ti. Both cards run games at 4k, both can achieve easily 60 fps and both render shit pretty fast. But I will say it again, you can buy an AMD card and support the company that doesn’t pull some shady stunts or you can buy nvidia and support their shady crap and get that GLORIOUS 10 extra fps.
I’m not defending red nor green, I’m out of PC gaming anyway but boy, I hate when companies mess around with people’s wallets and minds like they are toys.

I have no electrical wories because it’s baked into my rent so it makes no diff how much or how little power I use.

If the vega 64 performed even remotely close to a 1080ti, I would have a vega 64. It’s a mid-range card. That’s why I went with nvidia this time around. AMD doesn’t currently make high end cards. The Fury X was the last high end card they made and it’s 3 generations old.

How old is the 1080 and is there something coming this year after it?

How old is the 1080 and is there something coming this year after it?

Just rumours for now. If feels like new stuff will be anounced soon though.

Haha ok ok I can currently max out some games at 4k 60fps. That is one of them. That’s actually why I wouldn’t upgrade yet. I get that on destiny 2 with a few settings I don’t care about turned down, even.