Hot damn it has been a week…

I will start by saying that I really don’t want to get into why we all ended up here. I wanted to make this post to show how much you guys blew up my expectations. I knew a lot of you were active on GamingTribe, but the amount of activity here makes me wicked happy. We had some bumps with the initial anger about what happened, but I think we are moving past it and getting into our own groove.

It all started last Friday. I was planning on sleeping in after a long day of being in a conference. I had a 2 hour drive ahead of me and wanted to feel well rested. I woke up at my normal time and begrudgingly say the 100+ messages from ShiftySatchmo, nanderman, and sYnCroSis… Fun.

Faster forward to cruising home, I get to chatting with Todd about what was going on. He said he was planning on making something and was doing research. Very conveniently, I had done this exact research earlier last year in a failed attempt to get my WoW Guild in one place for posting things. I knew what had to be done, but wanted it to be cheap. NodeBB offers a hosted plan, but the smallest one is $100 a month, no thanks! Luckily DigitalOcean (shameless referral link if anyone wants servers from them) has really well priced VPS machines that can be deployed easily. Who could complain about $5 a month for a sweet forum. About an hour later, I had the domain bought, VPS up, server configured, and https enabled. READY TO GO.

Things were going pretty well, I was making some changes to help make this place shine. I got CloudFlare setup to add some extra security to the entire endeavor. Things started getting a bit rocky though… As the number of threads grew, the server got a little sad under the load and people were getting 503 errors saying the server was in another castle. This hit a peak around Tuesday of this week: 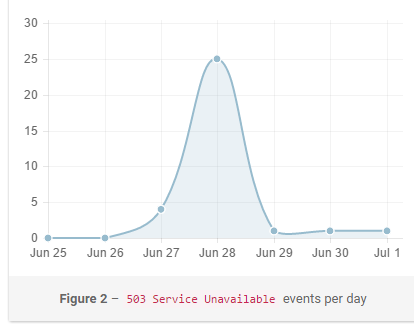 After that, I pumped up the server to have more memory and is still pretty cheap at $10 a month. Now we cut back on those 503 errors, yay!

Scroll past this if you don’t like cool metrics.

We absolutely obliterated what I expected for this. The page views last month (which was barely a week of page views) almost hit what the $100 a month hosted version of this forum would cost. I think I’d have to go to the $250 a month version if I paid them for hosting. The current server this is on costs $12 a month (the extra $2 is for weekly backups).

Since I turned on CloudFlare, I get to see cool metrics from their side as well. There were a huge number of requests to the domain from users, web crawlers, etc. 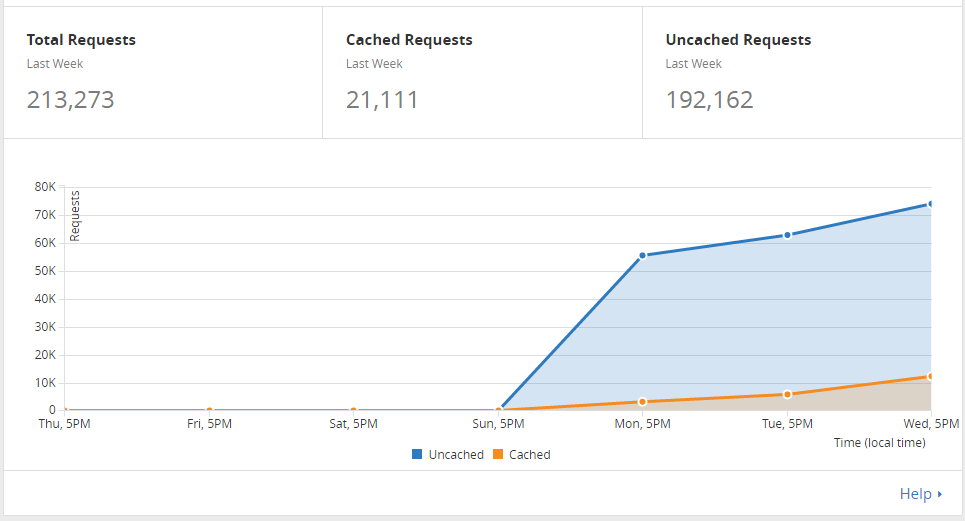 I was told on the NodeBB forums that I should not have even thought of using the 512 MB box for this forum, since apparently you all are way too active.

What the future holds

I think ShiftySatchmo can attest to this, but I am pretty lazy. I do really like projects like this forum though. My goal is to continue keep this place up and making it a good place for all of us to chat. I don’t have any crazy goals or anything like that, but I want to make sure people are overall happy here. I’d like to add useful functionality while keep the site as simple as possible.

It looks like the current server is holding up well to the load we have now. I’ve got nightly backups going to another server just in case shit hits the fan, and otherwise things are looking steady here.

Current costs
$12 a year for the domain
$12 a month for the server (potentially $24 if an expansion is needed)
$20 a month for the expanding URL service (still on the fence on this one, I can self host, but their support team has been really helpful so far)

Some people have asked about taking donations to help pay for things. As it stands, I’d rather not take donations. I looked into the process a bit, and to follow US law, I would have to declare donations as taxable income and go through all of those loops to deal with it. IF I end up having to upgrade the server, I may look more into it. From a cost of paying myself compared to the extra time for taxes, it isn’t worth it for now. I’d rather you guys give each other gifts and giveaways with whatever donations you had in mind. NOTE: I do accept beer from ShiftySatchmo as payment from him.

In closing, definitely let me know if you need anything. I will do my best to reply to people in forum posts, chat messages, or wherever you find me. I really am happy that we have a place to call home! Thanks for all joining and spread the word!

ShiftySatchmo said in One Week Later:

See. I knew he would agree.

I will expect some more hits on the expando API for embedding videos though.

Great update. You should do these on the regular like a monthly news letter or something

Massive thanks teh_g . When it does come to help for paying for things, may be a way if we specify what the money is actually for. So, instead of donations, we can say this $5 is to pay for the Droplet etc, not sure, just something to check into as I would surely help pay.

LetsGetIt1220 I’ll have to look into that. Taxes are stupid.

teh_g couldn’t we just give you money directly as a gift? You can receive gift money up to 10k a year tax free and I doubt we will collectively give you anywhere close to that haha

ShiftySatchmo I’ll have to dig into it more.

ShiftySatchmo So apparently if the gift is given with the expectation of something in return, it becomes taxable. I guess technically you guys don’t get anything in return by giving a gift? Taxes are dumb.

teh_g hm that’s tricky because there is an expectation. You’ll have to go the income route or nada