Thats the current situation of our country. its 3 am almost i cant even sleep. u will get a proper idea from here what i am talking about from this thread. cause they explained it better there. we couldn’t make the news internationally ofc cause all the news and news chanales aint saying shit. and all the tweets and hashtags were port blocked. but this thread helped a lot to spread the news internationally. they didnt blocked it cause our govt is not smart enough to block reddit from our country. hell i am sure they dont even know what reddit is. so yah here it is take your time and read it. and yah pray for us 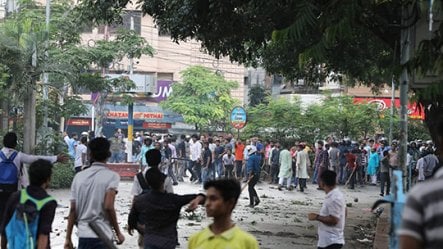 r/worldnews - School students have been protesting in demand for safer roads for...

wow. will pray for you and hope all the best for you Dante

I saw that today. Hopefully you can stay safe and things get better out there.

Hope you safely manage to get this fight done in your favor.

Believe me I know how it is to live in a corrupted country.

its getting worse and worse day by day

Stay safe over there. I wish there was more I could do.

Story of yesterday and today

After the day before yesterday what happend with all the school and college students, university student couldnt take anymore they came out yesterday to support those kids while all the school + college stopped protesting cause they didnt have any courage left after that day. so university students started to protest and this time it was bigger. (only prviate university students btw) so govt had enough balls now to show their true face. govt workers/thugs + police started to attack the students of East West University yesterday so for shelter all the students went back inside of the campus. but govt workers/thugs + police attacked them inside of the campus throw tear shell, tear gas, rubber bullets and stuff 100’s students were injoured. when other private versity (including my versity) students heard this they came out and wanted to help them but on the way more govt workers/thugs + police stopped them and same thing happened with them what happend with East West University Students. they captured 51 male students and 6 female students from my university and took them to the police station. dont have info how many students they took from other veristies. so today 10 am police released all of them and went home all. and guess what no more protest today. cause no one here to back us up. eventually only students got injured and stuff. few celebrity/public figures either suddenly went silent or went to police custody. and the guy who sent news to al jazeera for help is also took yesterday and in 7 days remand. sigh

So yah Govt. Won once again. everything will go normal again…but lets see for how long.

Were the protestors being 100% peaceful, or were some being destructive?

these are under 18 man how can they be destructive ? kids did what traffic police should have done. stuff like which cars should follow which lane and according to law every high way roads should have emergency lane but till now we didnt had any kids were doing that making emergency lane so that ambulance can go properly on time. and the most importantly and effective one which is, they were checking every vehicle’s licences. our country is corrupted enough and most of the bus driver specially local bus driver dont have licences or anything. thats why they always drive recklessly cause u cant catch them and people always die for that. always and thats where it all begin. so those kids were checking all the vehicle’s license and those bus always dont have any license and stuff so what they did they just took the key of the bus those dont have license and kept it there till they get proper papers. so yah i think u got your answer but it was one week ago till govt “took” Step

Caught a short story about it yesterday, so it’s starting to make the rounds around the world and get more attention. They said Bangladesh has the highest deadly road traffic accident rates in the entire world!

I was asking if the protestors were protesting peacefully or destructively. Also, under 18 year olds can absolutely be destructive lol

well i explained all that up there to make u understand the situation and to tell u that how peacefully it was going. no destructive or anything