I thought we had a topic on this, but I can’t find it.

Anyway, anyone else gonna jump on this?

Just released the pricing, $30 for the base game.

I’ll probably get it!

Polekatt Never heard of it to be honest. I will have to look it up.

I’m a Conan fan, have read all the stories twice over now. Just love their pacing and the imagination of them. Always thought the universe was ripe for video games. But I just don’t know. Been following the updates, blogs, and videos and it looks good. But there just hasn’t been the moment that pushes it over the top for me. Concerning the gameplay or Hyborian setting. Just no ‘must have’ moment… Yet. I’m definitely waiting to hear some user reviews. Especially concerning what there is to do in the singleplayer aspect since that’s what I would play. I feel like all the coolest stuff showcased has been PvP/online stuff. Either way, Early Access, so I got time to decide.

schlitty I’d be fine with the MMO aspect of it, as long as cheaters and griefers can be controlled properly. The good thing I see here is that you can do private servers, like ARK. My best RL friend has already told me he is going to have a server going.

But what has me pumped is the mod support they are saying they will have. Apparently both single player and private servers will be able to be modded, and they are going to support this from the get go. Since its funcom, I know they already allow it to an extent on The Secret World, so on a private system it should be a lot like what you can do with Ark and Skyrim.

I’m about to play this game.

Got this game and played it a bit last night.

It has a good ways to go, but I was quite impressed for early beta test.

It reminds me a lot of Ark, but with the Conan universe, instead of Jurassic Park. So, a year or so down the road, if they continue doing good development, and I find the right server, yeah, I can see myself playing this, simply because I like the universe and setting better.

If you have a good amount of people that wanted to roleplay the Conan mythos, this could be a great tool. If you want to just build and play survival, this is just going to be one of a million other games out in the genre out there.

One thing I would like to see is more variety in the character selection as far as race. Right now, race means nothing. I would like to see it more like Skyrim, or D&D, where you at least get something different based on the description of race you pick. I’m a big fan of strengths and weaknesses, and not making every character the same jack of all trades.

All in all, I was impressed. Game was slightly better than I expected, for the first day of early access, and I like the direction. If you decide to get it, you have to keep in mind that early access is just another word for beta. These days I think games get bad reviews too quickly, because people jump in expecting a finished game. I’d give this one another year before calling it finished.

Anybody got any specific questions, I’ll be glad to answer.

And one thing that was hilarious-

When you create your character, you get to pick looks, but the crimes you committed to get exiled, are picked and given to you from a random pool. I picked a Stygian priestess to start off with, and my buddy picked a more barbaric chick. (Our plan was to be tank and mage/healer, thinking race meant more than just the descriptions)

Anyway, I picked priest, he picked barbarian warrior. When we got to the end, and it gave us our crimes, his crime was disobeying and beheading a priest, and mine was impersonating a priest.

Sounds interesting so far, definitely keeping it on my radar. I kind of don’t mind the random crime pool idea, sometimes its nice to have a little out of the player’s hands. But it was especially hilarious what you and your buddy ended up with haha.

I know its early early, but some Hyborian specific questions;

Sad to hear about the race not mattering much at the moment, during Conan’s travels he most definitely ran into people and cultures with varied and specific abilities!

This basically looks like Ark and Rust had a baby. I’ll probably pass since majority of survival games don’t pan out.

I know its early early, but some Hyborian specific questions;

Sad to hear about the race not mattering much at the moment, during Conan’s travels he most definitely ran into people and cultures with varied and specific abilities!

Bear in mind, that we didn’t get very far. We just managed to get our one room house built on the edge of the map. From what I could tell-

No politics or regions of power were built in. To me, it seemed like it was just exiles out amongst themselves.

The only NPC’s I saw were other exiles, that you can kill or enslave, presumably in the same boat as me. There did seem to be a quest to follow, but it wasn’t an npc I could talk to. I would find these walls, and if I interacted with them, they would glow blue, and give me some type of audible message. I don’t even remember what it said, because I retain better by reading than I do hearing. On one area, a trio of ghosts appeared, and I was supposed to follow them, but I got to a point where I couldn’t without building a bridge. (it was obvious that was what I was supposed to do)

I saw no magic other than what would come from altars and things you could craft. Like craft an altar, do a sacrifice, get something, that sort of thing. But it will take a while to get to that point.

I saw no treasure to quest for. However, we did find a cave, that looked like it may have something in it, but it was too tough for us to get very far into. Being in the cave at all caused corruption of the mind, which permanently damaged your health, until you could come up with something to reverse the effect. So it was obvious that “something” was down there.

Yes, the biome was just the desert-ish one that you see in the videos.

I really hope they do have some variety planned.

Oh, and by the way, I am running an i5, GTX1070, 16Gb RAM, and the game ran very well on my pc. framerate was really smooth, I had the graphics set to auto, but I could tell they were very high. Twice, during the night, it just completely froze, for a couple seconds, but then was ok after that. My impression was that it was just loading new textures.

Aaand after trying it at my friends account, I won’t be playing this game. At least not until full game is out.

I have it, let me know about the server.

Oh and remember to turn on the sound for this tweet… no youtube as it is NSFW… you have been warned. 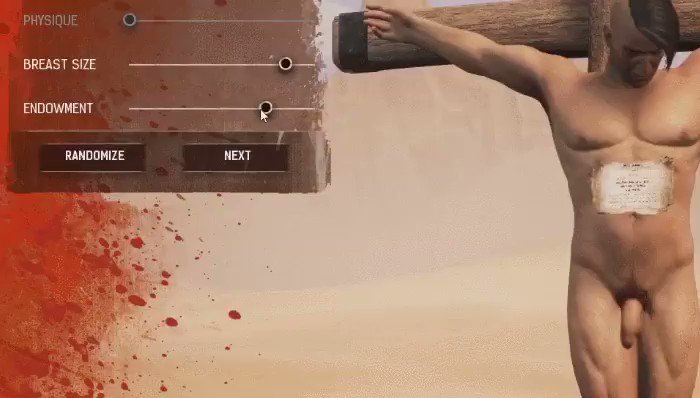 “I wrote you a banging choon to go with this @screencuisine https://t.co/UIXk7dcInK”

Ub6 gah, my eyes! every time I look at this thread, don’t need the warning, your thumbnail itself is nsfw! hahahah

Anyway, I just thought its been a month since I basically started this, so I figured I’d report in, having a month’s play time under my belt now.

And, thoughts are pretty much still the same on it.

Its GONNA be a great game, but I feel it will be a niche game. But there is a niche that is there, just waiting to be filled by someone, and no one has stepped up. This niche is the people that want an MMO that is built more for roleplaying than it is for leveling and raiding. This game already has me hooked, enough even that it is the only thing I’m playing now except for a Skyrim session here and there.

Right now, I would not recommend it to anyone that is not into roleplay. If you are into roleplay, I would highly recommend it, just make sure you find the right server for you. Seriously, without the rp, it will get boring really quick, I would think.

Gameplay is getting better, they are squashing bugs right and left, but the lag, especially during combat, is really bad. At various times, this lag hits, and you just sit there with your screen frozen, for a second or two, and then rubberband to whereever you were last pointing if you had a direction key press. Just standing around, its ok, but in combat, you’re dead.

Like last night, we tried to take a camp, I did great, during the initial fight. But then after that, my tank died, I tried to go loot her stuff as she was running back, and rubberbanded into the camp myself, and then I died, to something I could have defeated, but only because my screen was froze, I couldn’t fight back. Very aggravating.

Once they get all that part optimized, I will let you guys know. But for now, like I said, unless you are like me and into the roleplay, (and find a great server!) then I’d continue to stay away.

As I said the game is apparently being built for roleplaying. The props, and building stuff are amazing, just with the stuff they have in so far. And modders have jumped on board, so there will be all sorts of things available.

Ok, so thats probably not a lot of great or useful info, but since I’m playing actively, I can try to chime in every month or so and keep you up with the progress on this one.

Hey @Polekatt , you got any further opinions on the game as its evolved and gone full release? I was just wondering how much lore and quest content has been added in the last year+? And how you’d evaluate it as a singleplayer game nowadays or if its worth playing that way?

Hmmm. Honestly, if I played this game single player, I’d be bored to death after a month. As far as lore, I’m not sure how much of that there actually is, especially related to Conan. That said, I’ve played this game a year and a half, so it may be that I’m just jaded, because I just gloss over the things I’ve seen over and over again.

Still, I think there is only enough lore and exploration to support it about a month, if you are single player. The building can be fun, but get ready for the grind. There is a tremendous grind involved if you want to make materials to build with.

Leveling is primarily a grind.

Combat is pretty fun, and the perk system has evolved into a pretty cool way of making it so your character can’t do everything.

I think the strengths of this game are either on a PVP server, where death has a penalty of some sort, (to make you think about your fights, not just run into every one of them willy nilly), OR on a RP server, where you are RP’ing with others as your main source of fun. Anything else, and I think you’d get bored fairly quick.

Oh and also, there are still bugs. Funcom has a habit of trying to introduce and push out something new, before fixing the stuff that is actually broken and irritating.