Only0neKnight Whatever Kojima makes, I’ll praise it like it’s a sun. (got the pun huehue?)
That dude is an artist and artists like Kojima should be valued a lotttttttt

Katsuo oh he is, he will still have all his faithful following

I still have no idea what the game is still.

You feel sounds by plugging yourself into a baby.

There are still to many “stills” in this topic. 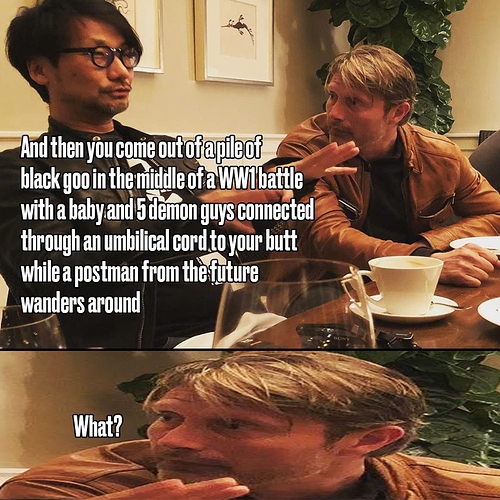 Currently downloading it still. My internet is garbage so I probably won’t get into the game until tomorrow.

Yeah I was actually thinking about finishing outer worlds before diving into Death stranding.

For now. It comes out in summer, epic has time to fuck it up.

Started playing this last week. Don’t know if I could recommend it to people because it comes across as being an acquired taste, at least gameplay wise. I’m loving it so far though.

This is my next game. It’s such a pretty game. It’s also really weird. Has a weird theme going on. It’s definitely interesting.

Would you say it is overall weird though?