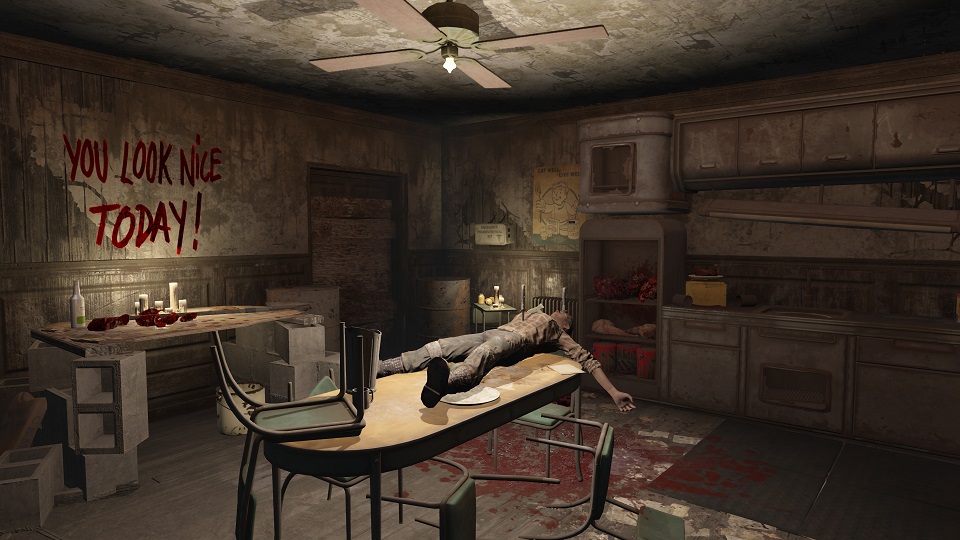 0_1469258403833_14320-2-1464472914.jpg960×540
Alright folks, I think this may be something I’ll start doing here for quest mods as I find them for Fallout 4. At least until I find something better to write about. So for my first mod review I chose A Cannibal in Concord, created by t9x69. This mod is inspired by the real life canibal, Albert Fish. http://www.nexusmods.com/fallout4/mods/14320/? let me say this; This mod is equal parts creepy, extremely well done, and hard as hell. Note that this mod is really disturbing and may be too intense for some people.

Okay for starters, this quest is entirely unmarked, as in you will not be guided via your pip-boy. Also this mod breaks from the traditional go here, kill that guy, grab that random item and turn it in. This mod requires you to look around, read notes, decipher clues, find keys, and push buttons. It also exposes you to some real life musings of Albert Fish, adapted to fit the “theme” of the Fallout universe. I will be honest here, there were a few times, I either had to turn the game off, look in the posts on the mod page, and once I even had to turn to Youtube in order to figure out where some of the keys were. The pay off? Well the reward is substantial and may even be a bit too generous, but after the 2-3 hours I spent exploring, realizing that I could never be a crime scene detective, and wondering how likely it is that the mod author was a truly demented individual, I took my reward and got the hell out of there…

Bugs: None, zero, nadda, though at times I really thought something failed to spawn or that it spawned somewhere it wasn’t supposed to

Performance: No new assets & any scripting was simple fragments that fired off properly & didn’t cause any issues (that I’m aware of.)

Design: In Concord there is a new location, find it (It shows up on your compass) and get ready to spend a few hours exploring, getting pissed, realizing the reason you got pissed was so simply solved, and getting pissed again. This guy did an amazing job cluttering up the place and making it feel like the home of a rather demented individual. The riddles presented make you think and the personal notes and logs really did a good job of making me uncomfortable. This could be due to me being a Psychologist, but I really was both disturbed and interested in reading what Mr. Fish thought, and part of me was left wondering how much of the text was his real life counter part vs what was created for this mod.

Difficulty (1-10): 8.5 Some of the riddles really got on my nerves and having to seek information from outside sources was a bit annoying. That said, it’s funny how getting pissed and jumping around, throwing a grenade, and shooting corpses actually proved effective on more than one occasion.

Fun: Yes and No. This was a big change of pace from the vanilla quests and I enjoyed having to use my mind to figure this thing out. There was almost NO combat, which was nice, but at times I was left bothered by what I had just seen or found. Again the thing that made it less than stellar was how difficult things could be and the massive jump in that difficulty between the main house and the basement.

Overall: Is it worth downloading and playing, yes. Is the reward worth the difficulty, yes it is! This quest provided a lot of interesting insight into both its author and it’s inspiration. It can leave you feeling a bit creeped out and If you have a weak stomach or get upset at virtual dead animals, kids, raiders, and cannibalism, I’d avoid this one. Otherwise, it’s definitely worth downloading, endorsing, and possibly donating to the mod author.

I hope this review is helpful or at least worth the read. Leave me feedback and let me know what details you’d like to see in future reviews, mods you’d like reviewed, or what I could do differently to make it more interesting. Cheers!

btw: constructive feedback is appreciated, being a dick is not.

I absolutely love this idea.

I love the Fallout and Elder Scrolls series, and I love using mods for them. I’ve had a couple ideas for writing one myself, but always too lazy to do it. So I would love to see more reviews, you would have one reader, right here!

I pretty much can’t find anything wrong with the way you did that. Gave a good description, then all your categories were organized, and everything I’d be wanting to know.

And being that I like quest mods, stuff like that, and psychological horror type games, I’ll probably put that one in my game.