Been a little over a month now since I have had my GTX 1060 FE in my gaming PC and as I get more serious about tinkering with my gaming PC. Affectionately named Cl4pTr4p… which game have I sunk 1000 hours into?

When I received the 1060, my intention was to always bench my previous cards against it and my intention was always to post the difference. The reason being that as I get more involved in the technology of PC building, the more cynical I have become with the reviewers on YouTube and Tech review sites. So I really wanted to investigate for myself and pen something from the perspective of what I consider an average gaming build.

Before placing the GTX 1060 FE into my rig, so difficult to resist the urge and error to be spotted later, I dutifully removed the Asus Strix GTX 950 OC 2Gb from my media PC (HTPC called Tiny Tina) and the MSI Twin Frozr GTX 970 Gaming 4 from Cl4pTr4p. An aside, my secondary rig is called Moxxi (Runs a HD 5770 Hawk). Any guesses yet. 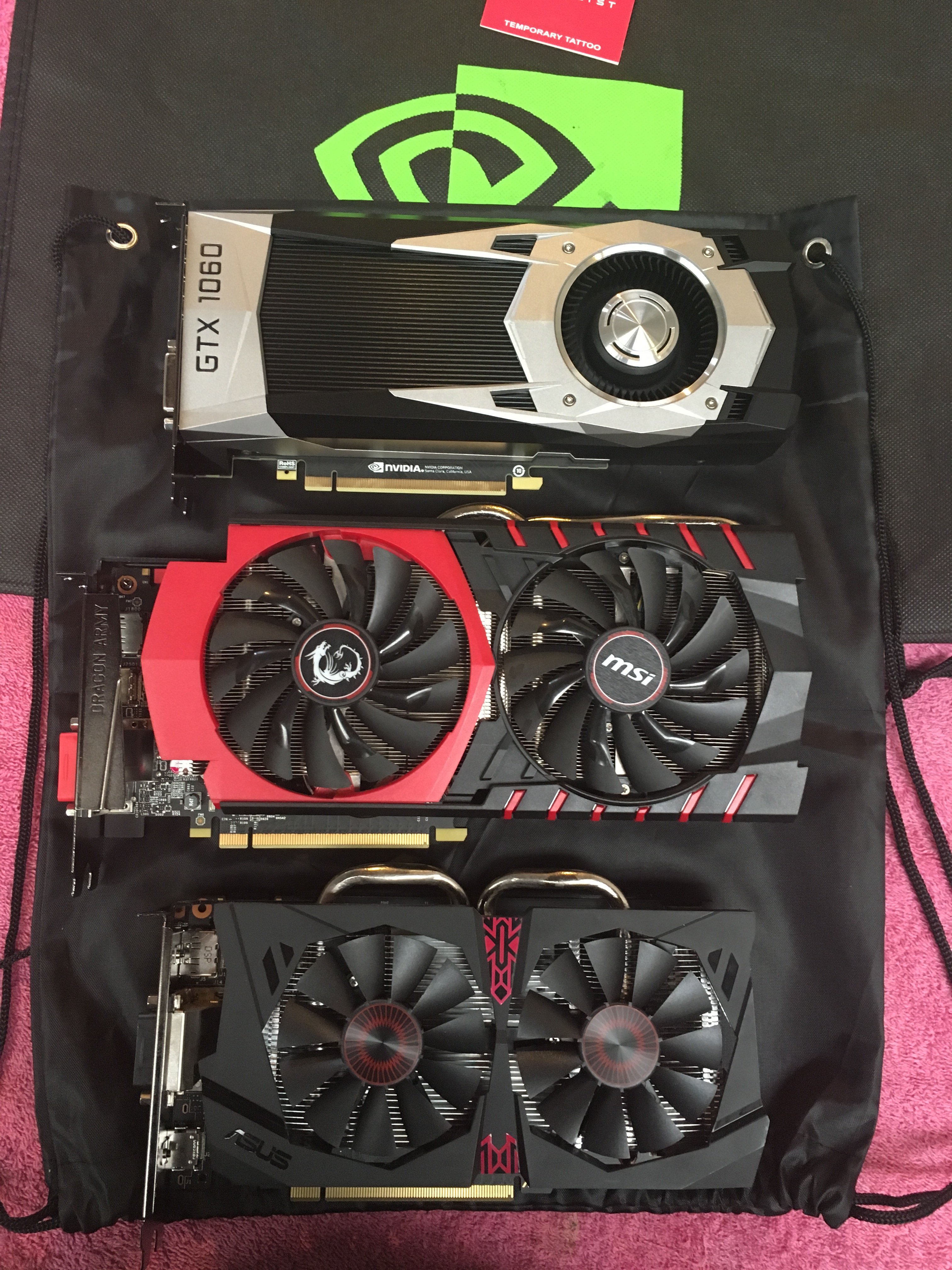 The scope was to determine performance of the cards using Cl4pTr4p as a test bench at 1080p and using the GeForce Experience to set the Quality presets of the games (auto optimisation). Additionally monitoring the temps closely as the GTX 1060 FE is the only reference card I have ever owned and was at the fore front of mind whilst awaiting the blower style GTX 1060 to arrive.

Most reviews are done on open air test benches for obvious reasons, as reviews are busy and need to minimise their effort. On or two reviews do benches in case builds, but are in the minority and the benefit would be to observe more realistic temps, which can then be reported.

Most frequently games played from OCZ SSD and favourites from M.2. 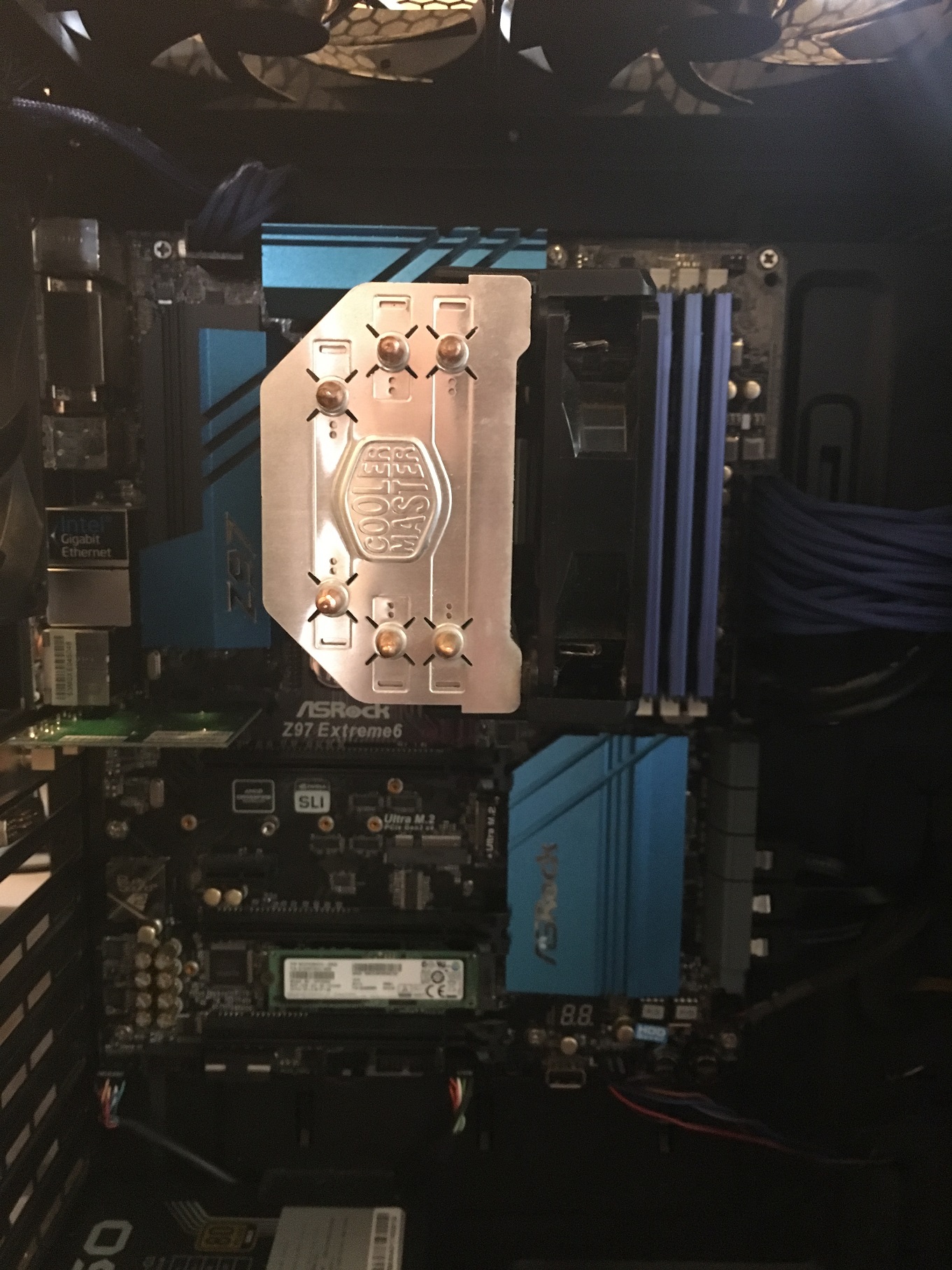 The GTX 950 being the little cousin went in first and I must admit that if you hate re-installing drivers, don’t do a 3 card comparison. Really don’t. I have a great deal of respect for the GTX 950 and as it was positioned in the market as an entry level card, I have to admit it is simply more than a MOBA online gaming card. It handles my gaming catalogue extremely well and I wish I had the time to ask a friend for his identical card to SLI the GTX 950. Why you ask? This card in SLI could actually be slightly better than a single GTX 970 in some games. The fact that I was gaming on my HTPC for most of winter is a testament to the performance available (depending on title). On another note, the GTX 950 is a great card for an 11.5L Silverstone SUGO SG13. 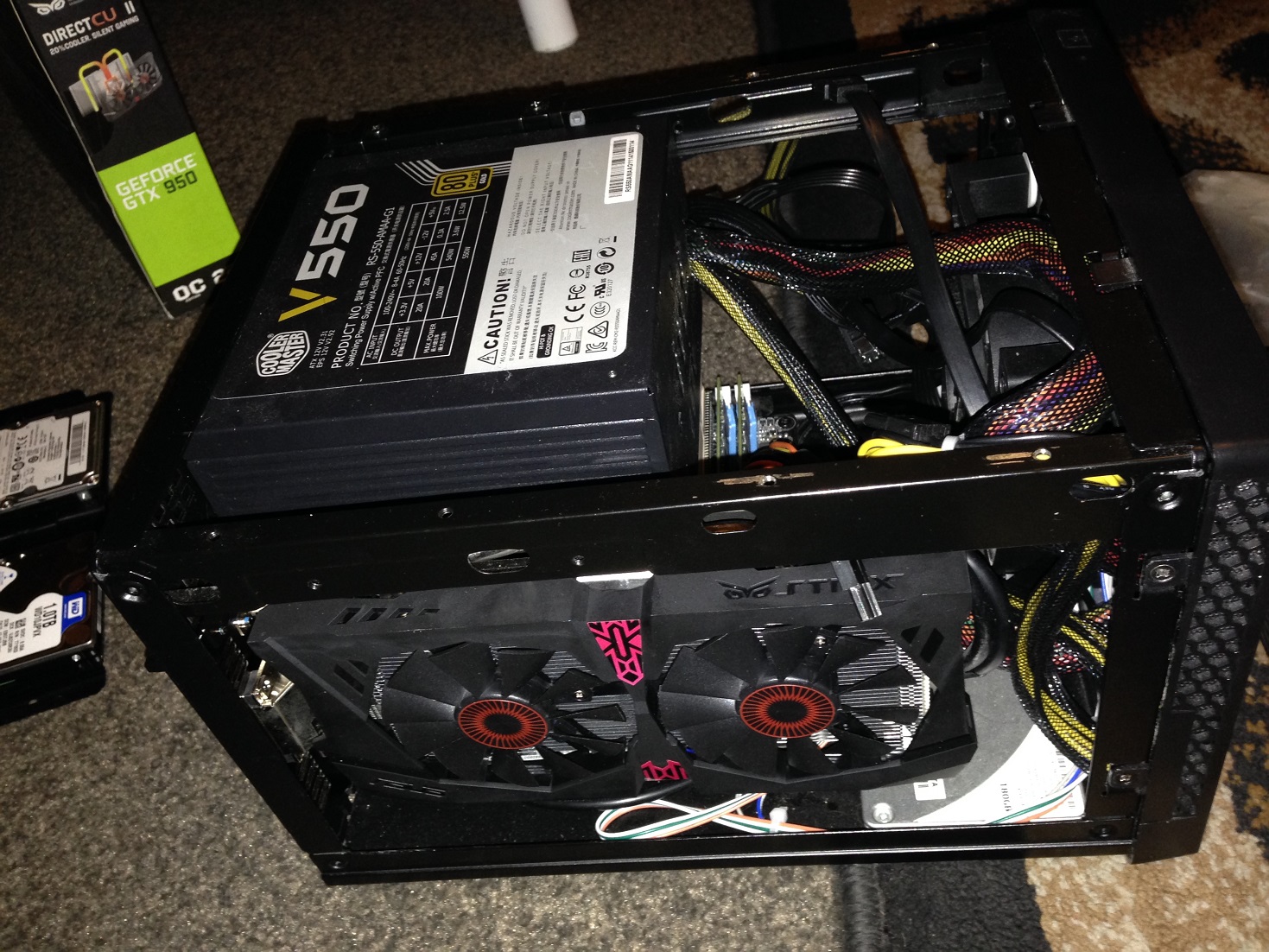 Next the GTX 970. Well I had given up on winning a competition and decided that for my birthday, I would save my family the trouble and get my own present a GTX 970. The card preformed very similar to my Crossfired MSI Twin Frozr HD7950 OCs on synthetic benches, but in game was where it came into its own, overshadowing the XFire setup by a good 5-20% depending on title’s multi GPU support. I was super stoked with this purchase and then thequestionmark blew me away by telling me I had won the GTX 1060 FE.

My mistake before getting into the benches. In my excitement to have the 1060 in its home, I forgot to install the new titles FarCry Primal and Mirror Edge: Catalyst. So I have no data for 950 and 970.

On synthetic benches one would could easily assume very little difference with the exception of the GTX 950 on my i5 ITX HTPC, another mistake on my part to be honest. In fact the XFire setup performs very well, however without red team bashing the in game performance of these cards do not true-up to the scores. Don’t get me wrong I was happy with the setup, but the multi GPU support for titles are very hit and miss. Often getting serious game crashes with Win 10 & 7 updates. Livable annoyance, but time consuming when time is limited for gaming.

Time to put the vapour chambered GTX 1060 FE to the test.

Benchmarks in Titles:
Dirt Rally (a fave); Grid 2; F1 2013 & Sniper Elite 3
Note that Snipe Elite 3 had an anomaly in that the FPS Min was glitchy, hence why the game never reported it, It would be pretty much zero on launch and was recorded in the XML log, but visually track the OSD in afterburner displayed a true value in the order of 22 FPS for all 3 cards. F1 2013 had no FPS Max reported or in XML log.

Results here may not be as we expect and very small average differences observed, but for those that have may have forgotten, we need to remember that the quality presets were determined by the Gerforce Experience auto optimisation and the GTX 950 was the middle of the road settings (Still Dirt Rally was pretty) and the GTX 970 was near Ultra and as we would expect the GTX 1060 was maxed on basically every setting. Why did I do this, as most PC gamers will not play with most of the settings, however the marketing of the GeForce Experience is do this for the average person who is not overly tech savvy and wants to buy a card he can afford, plug in and joyfully experience. That is not exctly much , but pretty close and pretty close to what most of us expect.

Additionally as I commented before, we see that the GTX 950 is an admirable performer and holding its ground firmly when considering the Average FPS performance. The GTX 970 and 950 are both relevant GPUs in the market and not to be neglected just yet as a gaming choice, baring in mind the quality presets and what would please you as a gamer.

All in all the GTX 1060 is a worthy upgrade and I can affirm that it is a better performer than the predecessors, consistently using better quality settings, providing better performance and with very good efficiency.

P.S. for those that have taken the time to read and if you care. I have put the GTX 970 in my HTPC and bench it on FireStrike. Scored 8,832. 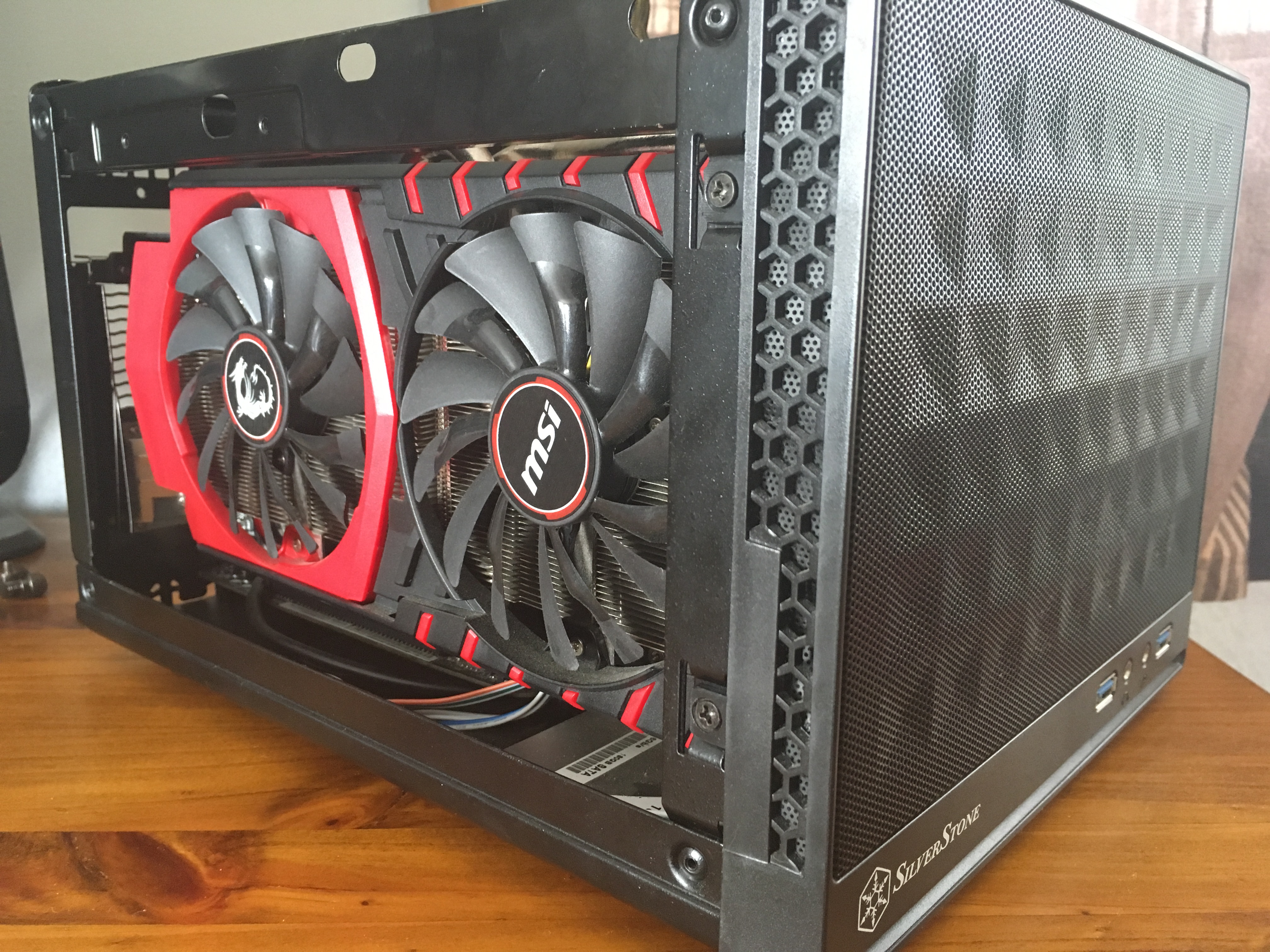 Trainsmash That 970 in the Sugo looks epic!

Someone here plays Borderlands 2 way too much.

Moved to Technology because it’s what I dooooo.

Who are you Trainsmash? Whooooooooo?!? Cursed anonymity! I like knowing who people are XD

ShiftySatchmo I think his name is Gary

Moved to Technology because it’s what I dooooo.

Who are you Trainsmash? Whooooooooo?!? Cursed anonymity! I like knowing who people are XD

Not much of a poster, so I figured it would be in wrong spot. Gary Scott of NZ. Trainsmash is good enough, my first and only GT for life. Normally would not give that much personal info either, “anonymity is a warm blanket”.

Sgt_T8ie Never would have made sense anyway.