So yeah this is my next game! Been playing it for a few days now. Gameplay is pretty much the same just way more polished and new abilities and enemies. Continues from where the first game left off.
Oh man does it look pretty with HDR! Running in performance mode (1800p60). My only other option was 2160p30. Oh also playing on PS5. I don’t know what it’s like on PS4.
Will post more later. 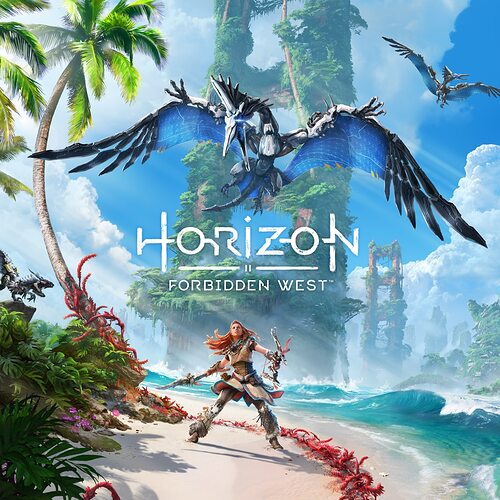 Get Horizon Forbidden West on PS4 and PS5. See the latest news, trailers, screenshots and more. Join Aloy as she braves the Forbidden West, a majestic but dangerous frontier that conceals mysterious new threats.

I’m playing that one as well. Downgraded combat, upgraded visuals, dogshit dialogues and the story is barebones. Good enough to finish it though.

CAN THIS GAME BE A BIT LESS CRINGE???

Just finished it. This game is a big downgrade from the previous one IMO. The story is stupid, the dialogues are dogshit, the combat feels janky at some points and the movement is way more restricted than in Zero Dawn. The only upgrade you get from this game is in the visual and sound design. That’s it.

I did have some fun though. The combat, despite it being sometimes meh, is still fun. Therefore, I’ll give the game a very weak 7/10. I did platinum it as well because you can get it with your eyes closed.

I’m still playing through it… but I’m visiting my dad for the long weekend (Canada Day is tomorrow). He has a fairly large 1080i tv. Man does it look like ass. At home I have it running in performance mode which on a 4k tv is 1800p60. On this tv it does super sampling. It renders internally at 1080p60 and scales down to 720p60 (1080i60) . At home I have a 4k monitor of the same size with 1000nits peak brightness hdr. You would not believe how ass it looks on this tv!

That sucks because, I’m not gonna lie, the game does look beautiful on a modern screen. I still don’t like the gameeee

I am enjoying this so far. I realized I am like 44 hours in though, time flies.

I finally beat this after ~62 hours. I did all the side quests and all the collectibles.

I think I’m near the end… though I have like 100ish hours lol. Did a lot of just messing around.

I didn’t farm for mats to upgrade weapons or anything. I just upgraded what I could.

I did for a bit and then said fuck it. Now I’m just doing quests.

So yeah, just beat it last night. Fucking beautiful on a 4k hdr display! There were a few moments I thought were cringe, but over-all had a really good time. Maybe the way I played through it was different enough than @Katsuo 's that I didn’t experience the problems he did.
Recommended to anyone who beat the first one!

It’s not really a problem but a terribly designed game. The previous one was much better. Forbidden west is just mediocre as fuck. Visually it is indeed really good though

But then again, it’s just my opinion and who gives a fuck what me thinks xd

Probably because I barely remember the first game because too much time has passed. So my brain isn’t doing a 1:1 comparison.

That was my issue. I’ve played Zero Dawn about 2, 3 months before FW. Probably should’ve played FW next year or something.