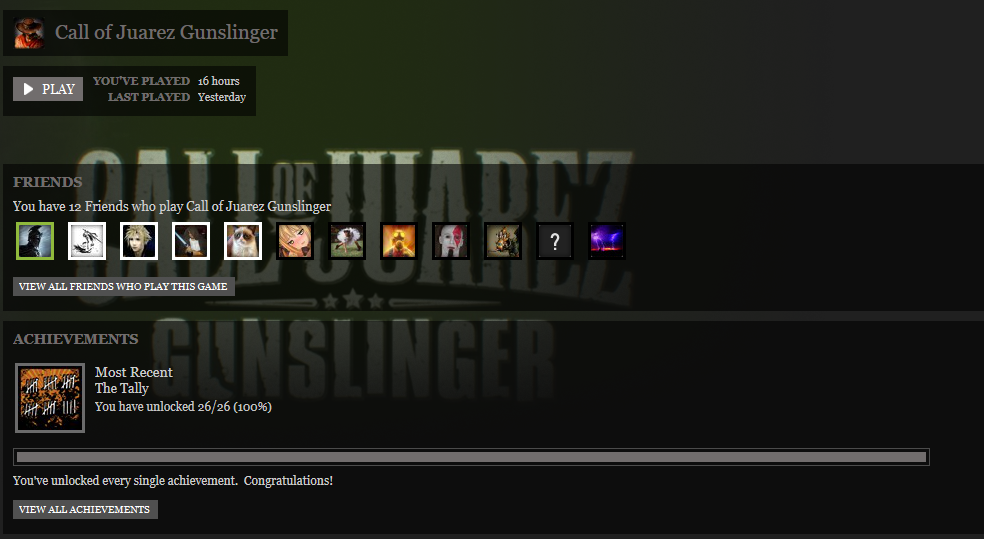 Game replayed for the hard difficulty and achievements.

I hope I beat a game this month

I don’t know. I added both because well, why not xD

ShiftySatchmo There! Fixed! By the way, it would be nice for you to finish Epistory. Howlongtobeat says it’s 5 hours long.

Katsuo only 3.5 hours to goooo

ShiftySatchmo I believe in you! You can do it! 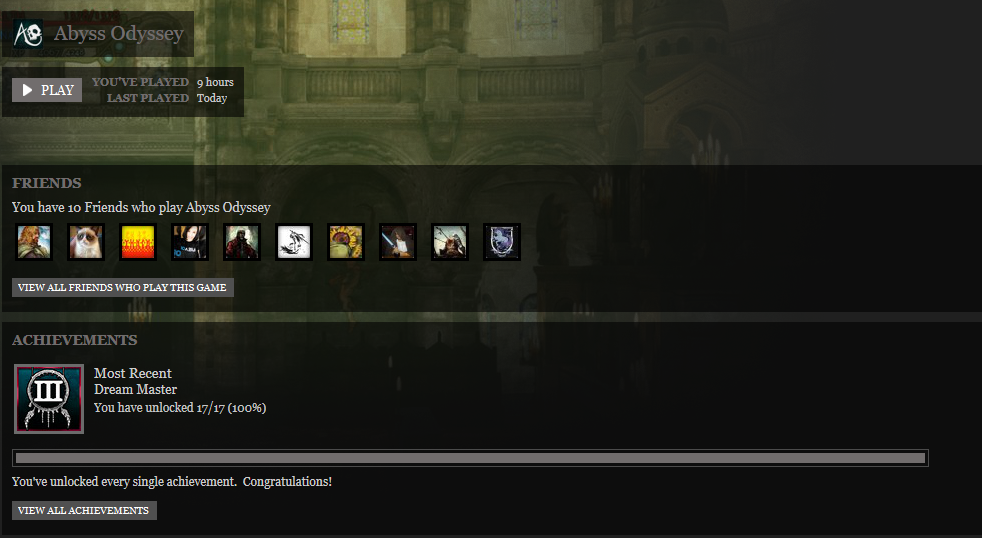 Finished Abyss Odyssey on Nightmare Difficulty. But, I’d like to get the points like I have finished the game on normal difficulty. I started playing this little platformer last year and stopped playing because it was impossible to play it with keyboard and mouse. Got the gamepad but never got myself to finish the game. At first the game looked quite challenging and the art style is really interesting. But unfortunately I really got bored, mainly because AO is freaking easy even on that Nightmare difficulty. The enemy attack pattern is just so simple and poor that made me puke. The only reason I’ve finished AO 100% is that I had unlocked the first 2 achievements and it was messing my completion rate so I had to finish the game completely in order for me to become the ONE. Pretty stupid reason but I’m a complete achievements whore.
Abyss Odyssey —> 6.5/10 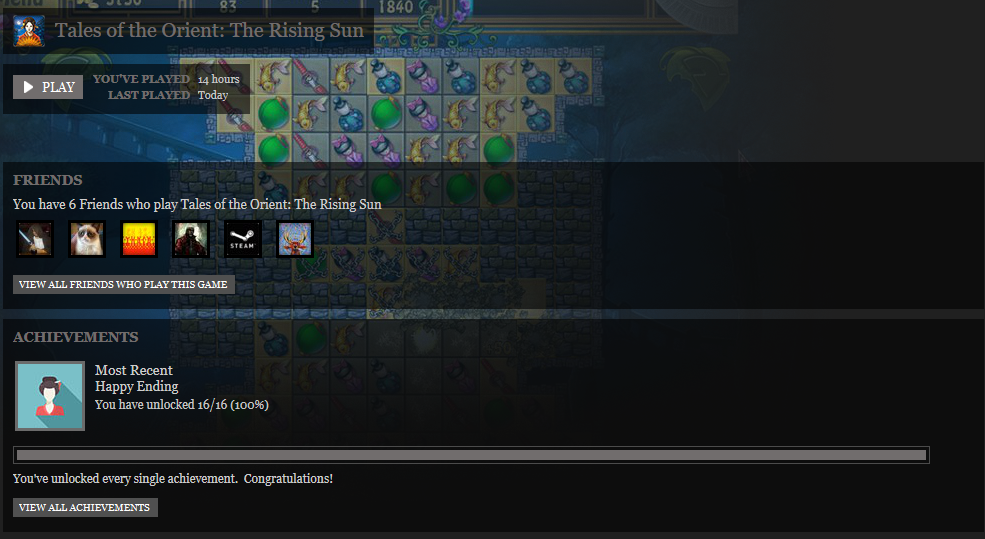 Forgot to post that I’ve finished Tales of the Orient: The Rising Sun. It’s a small Indie Match 3 Puzzle game which is really good if you want to relax and have some fun. Basically you have to finish 200 puzzles in order to gain gold. With the earned gold you have to rebuild your village which was destroyed in some kind of Japanese war. And that’s it. I’ve spend 14 hours just on that haha 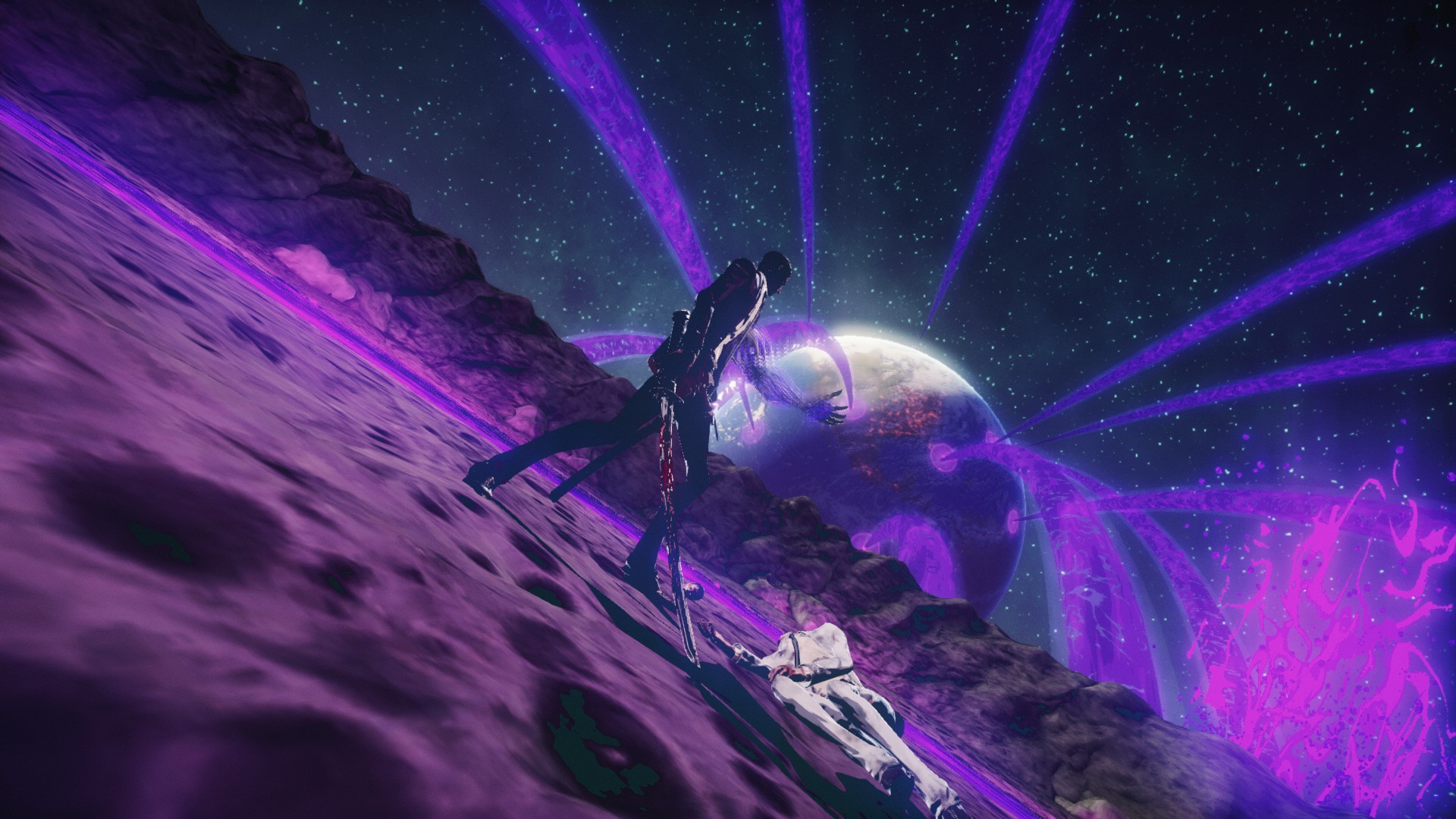 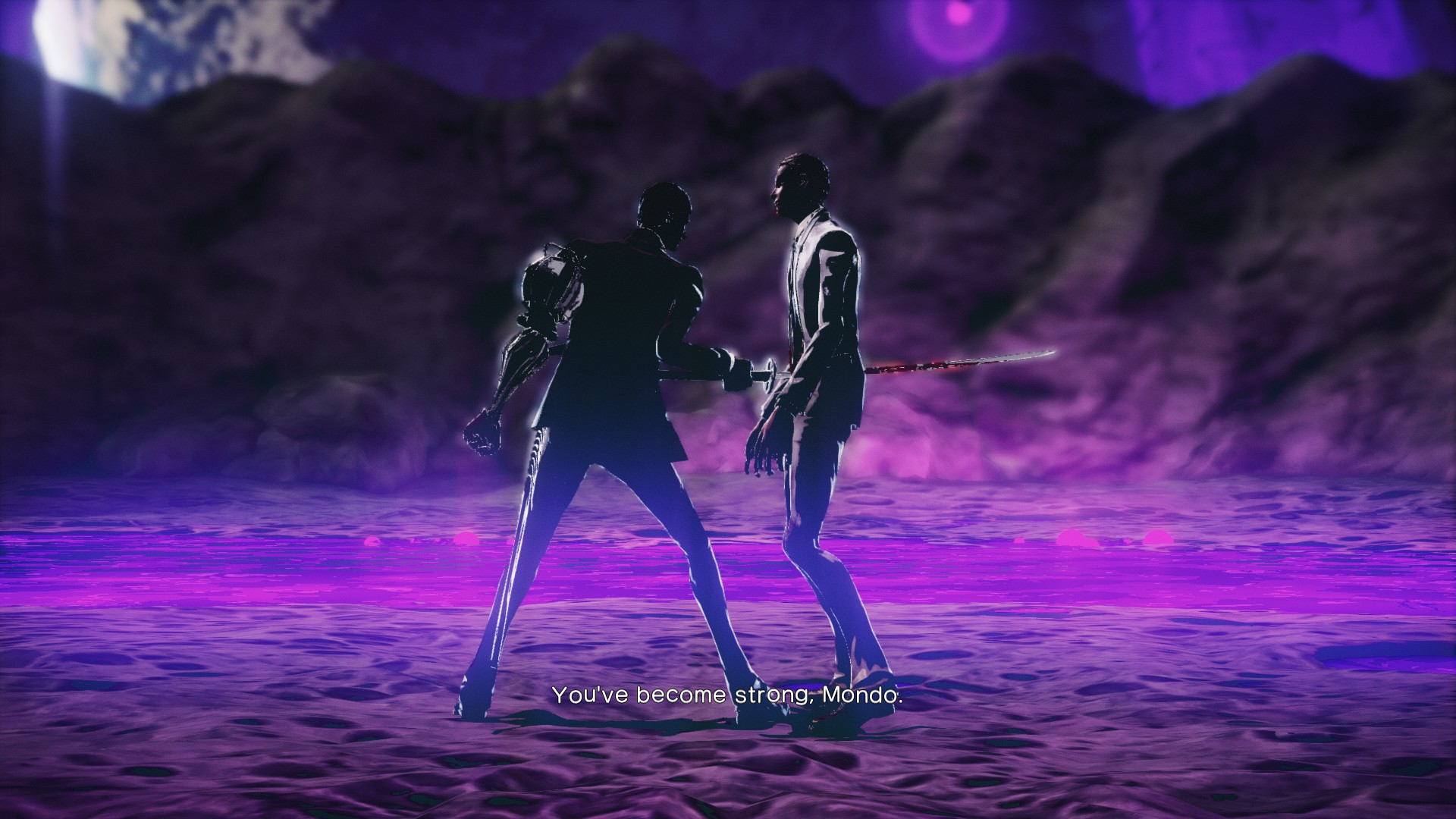 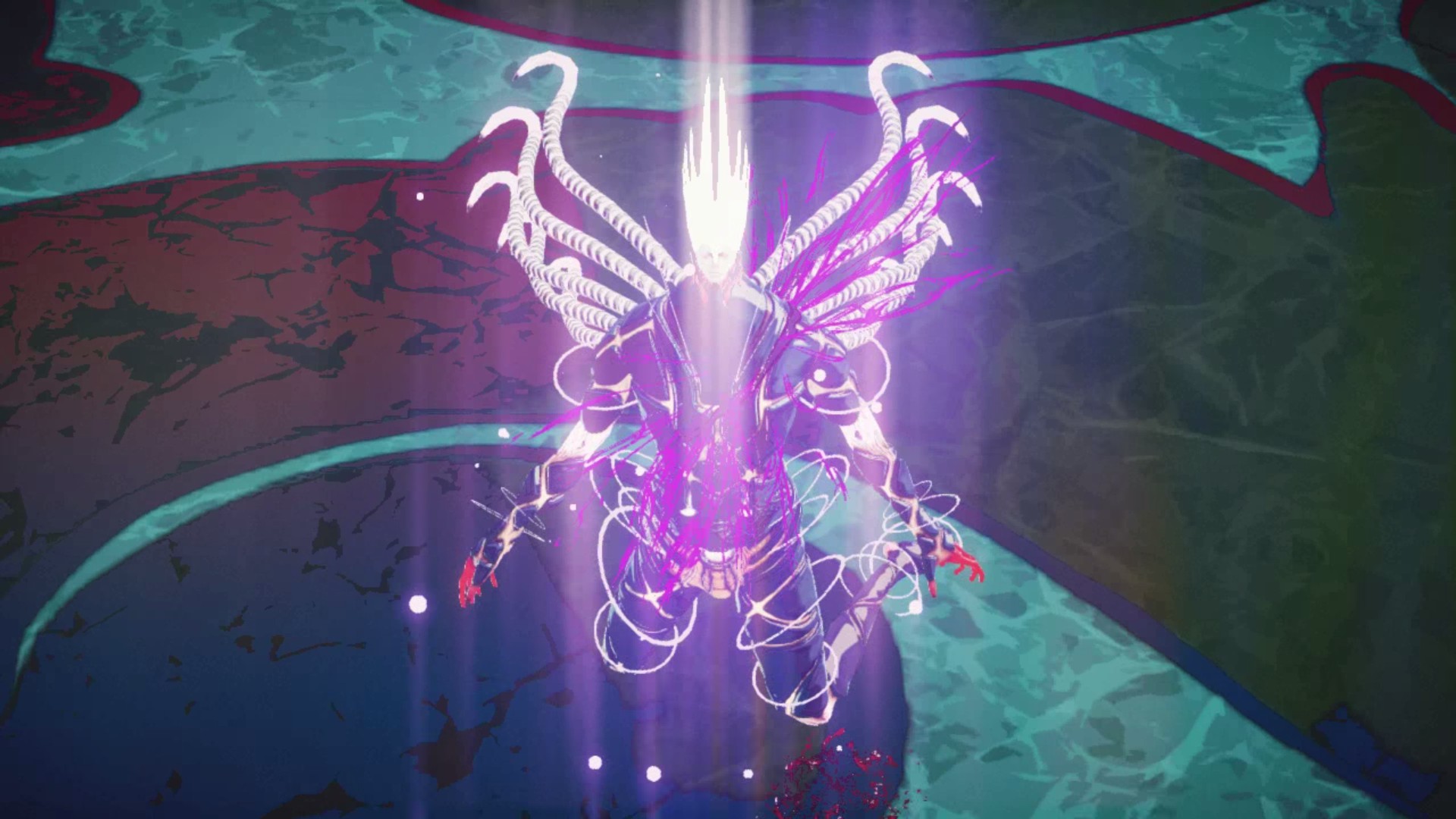 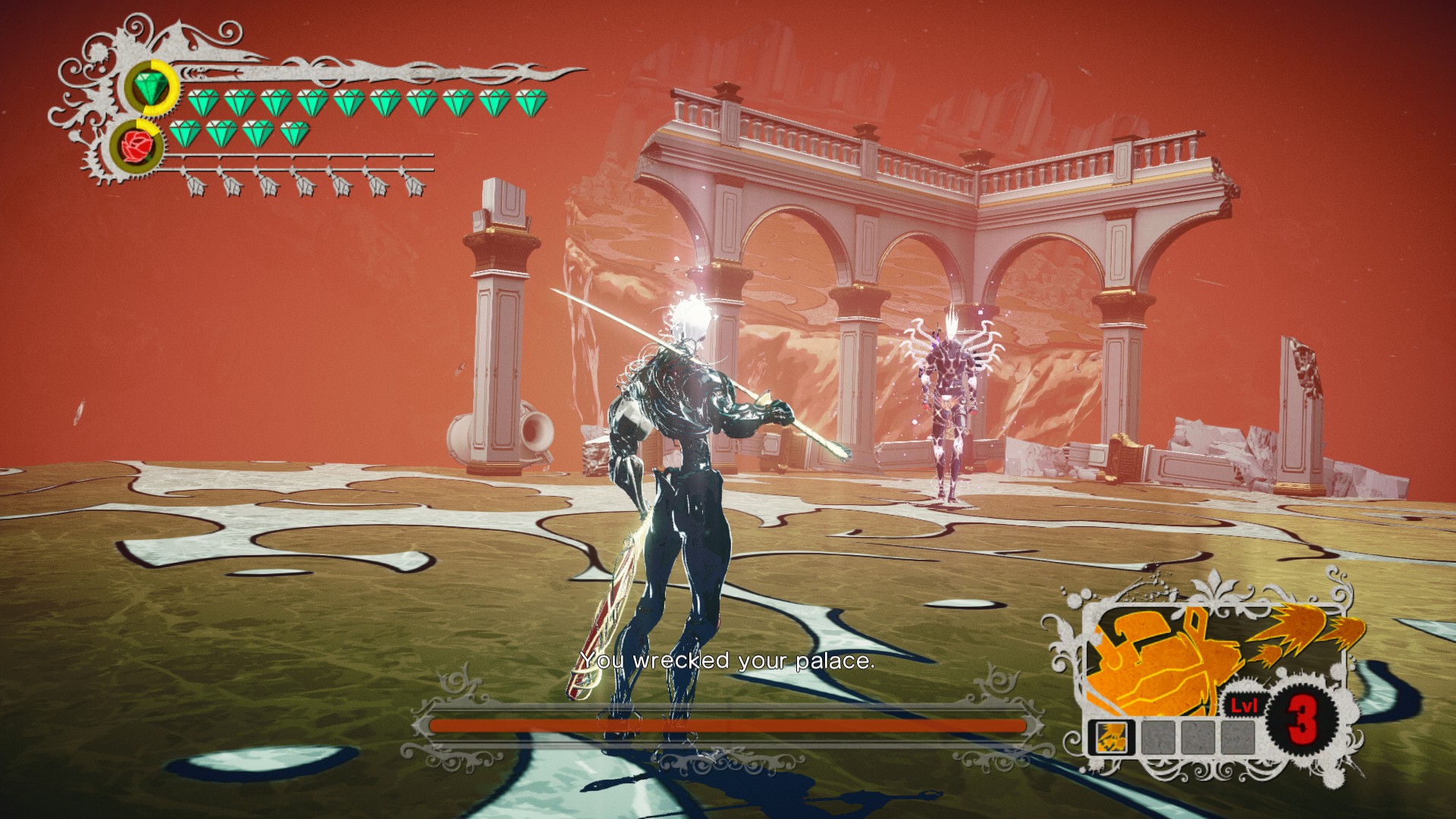 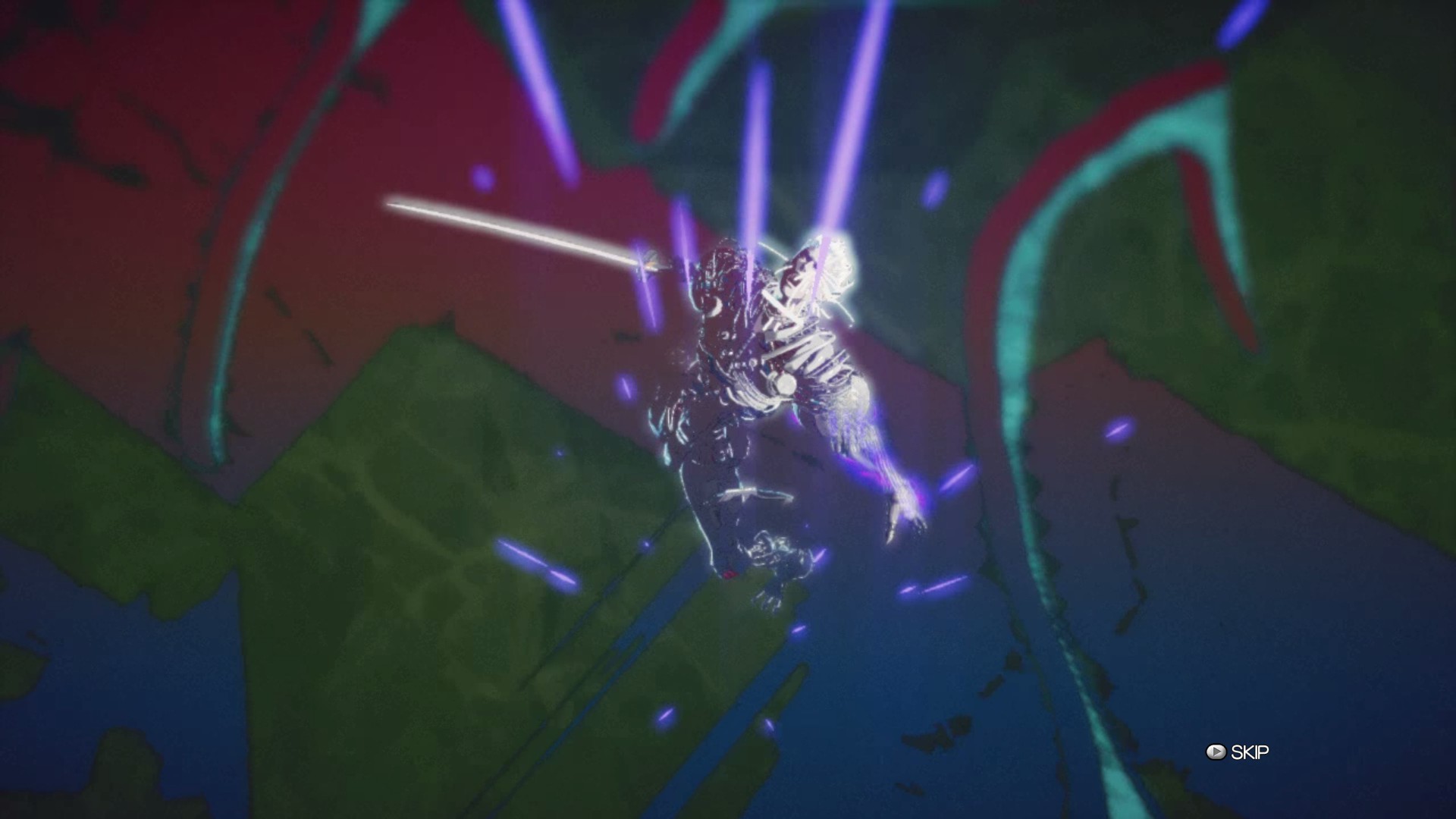 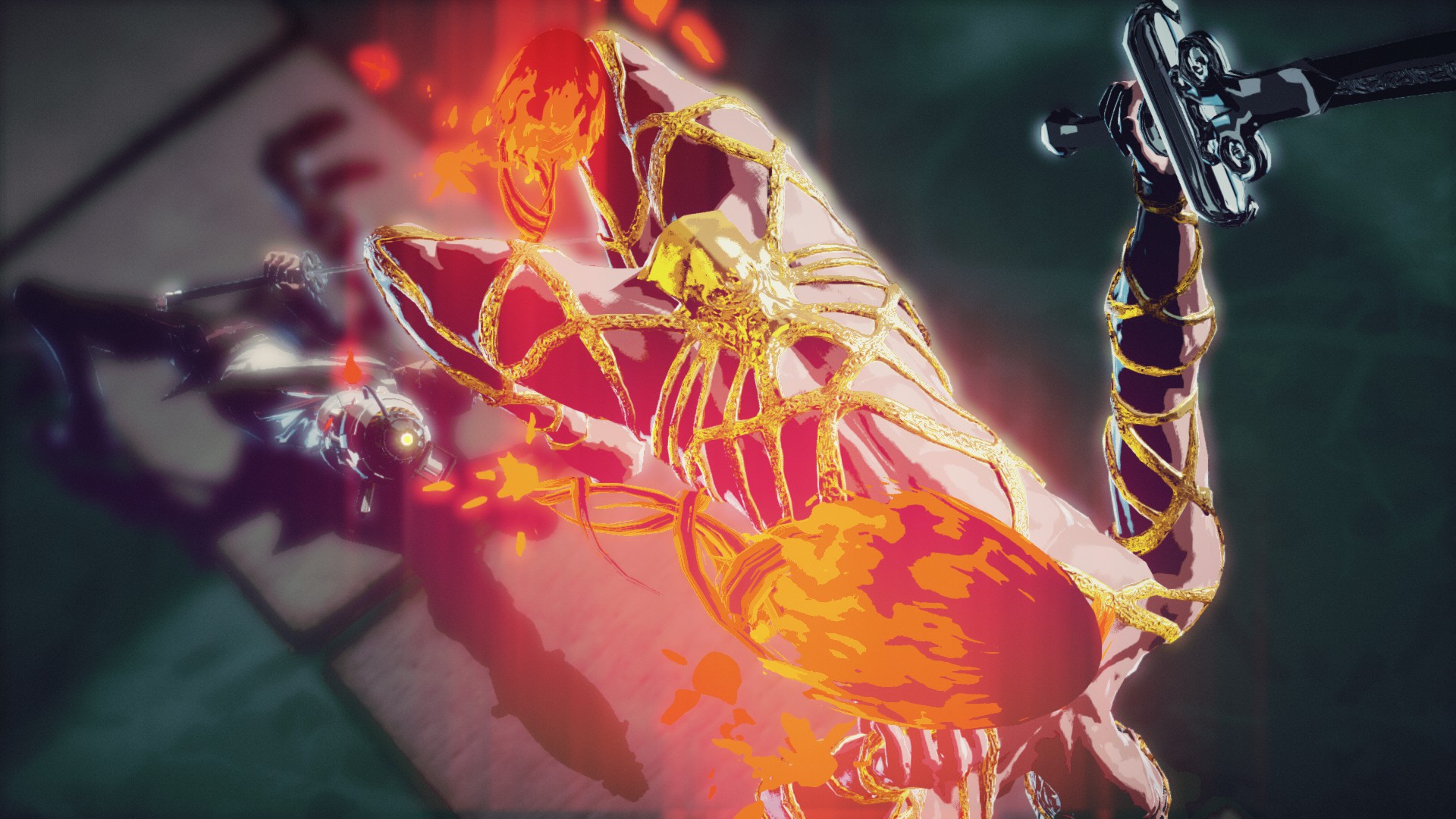 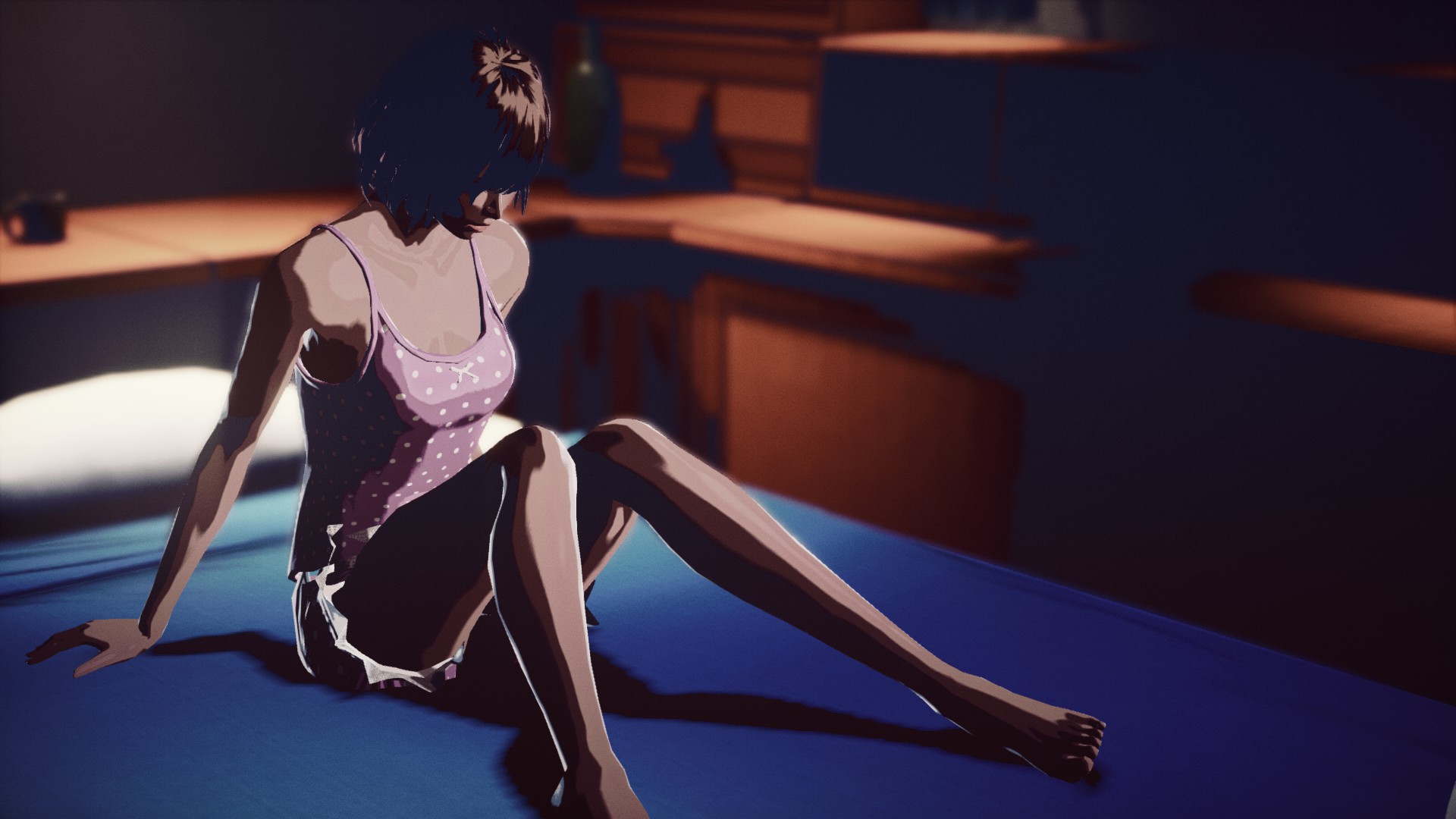 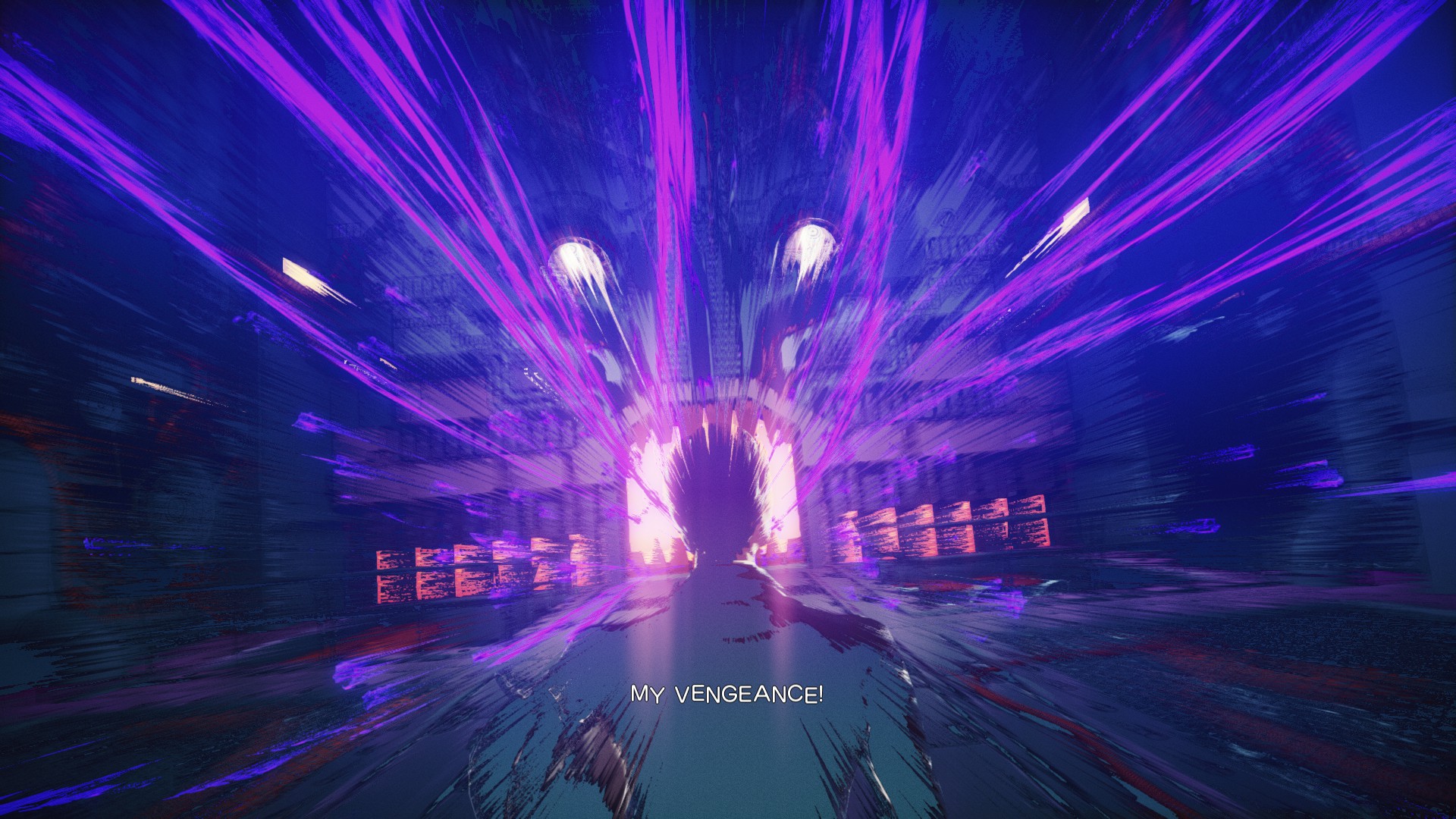 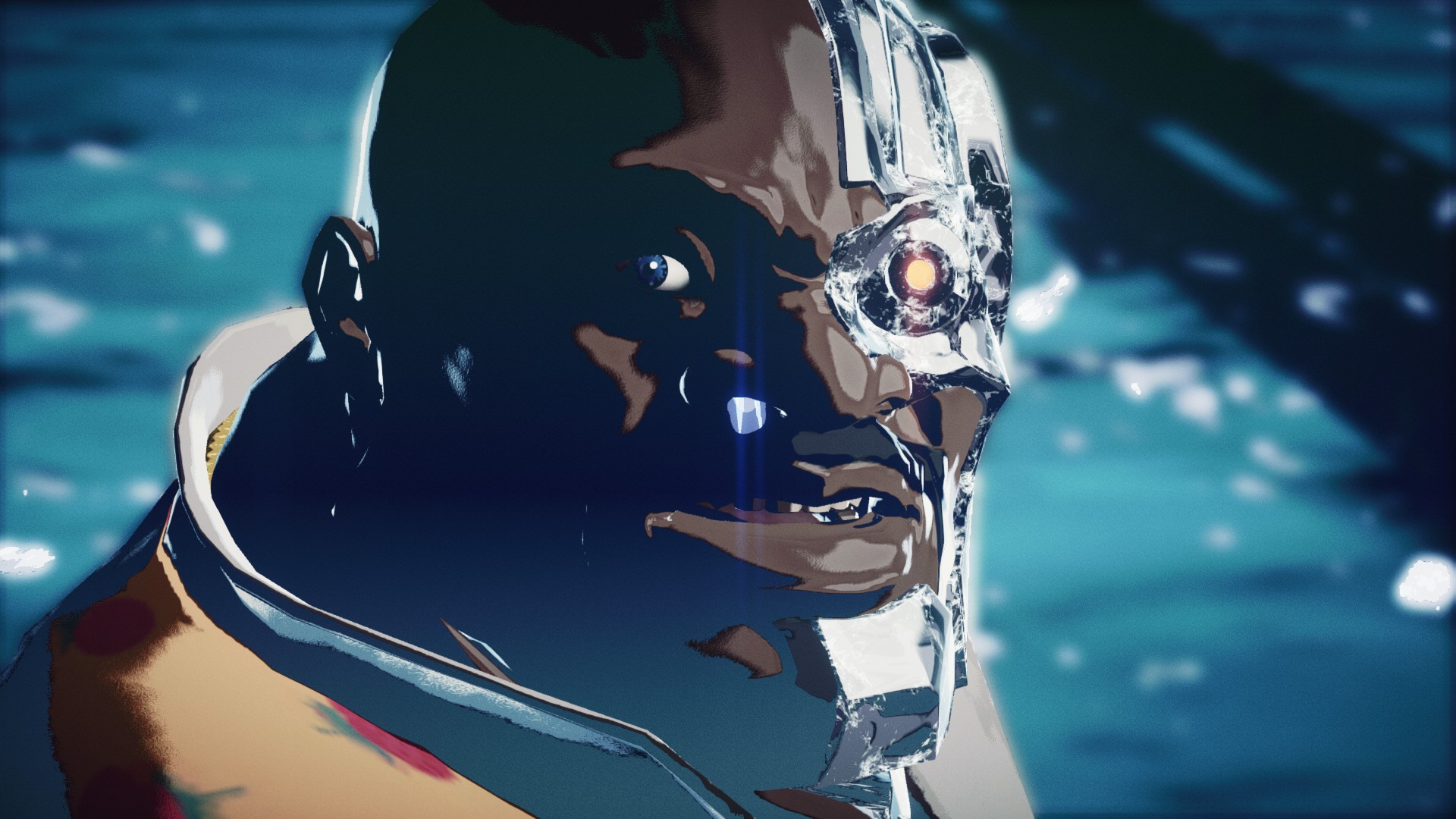 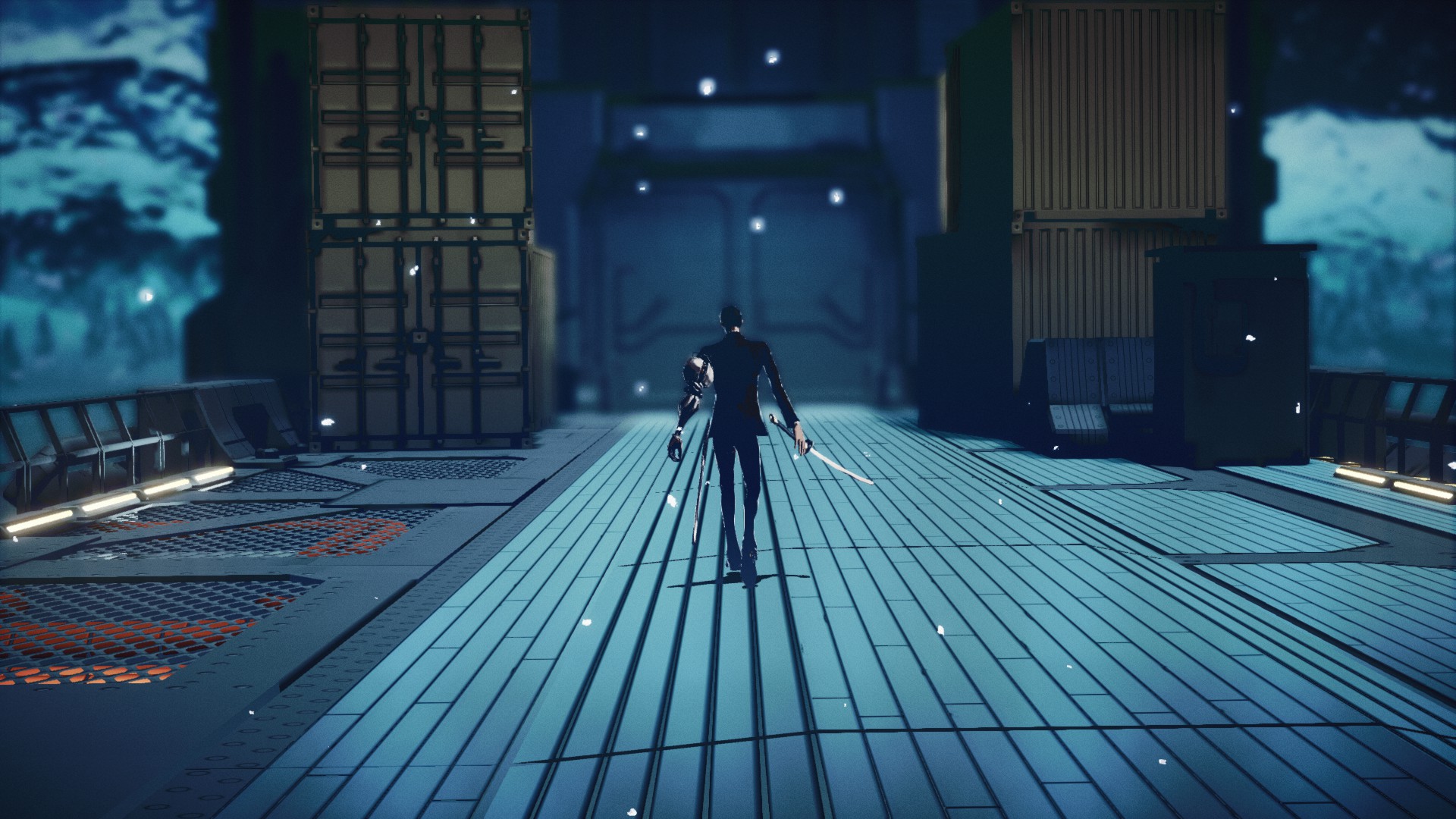 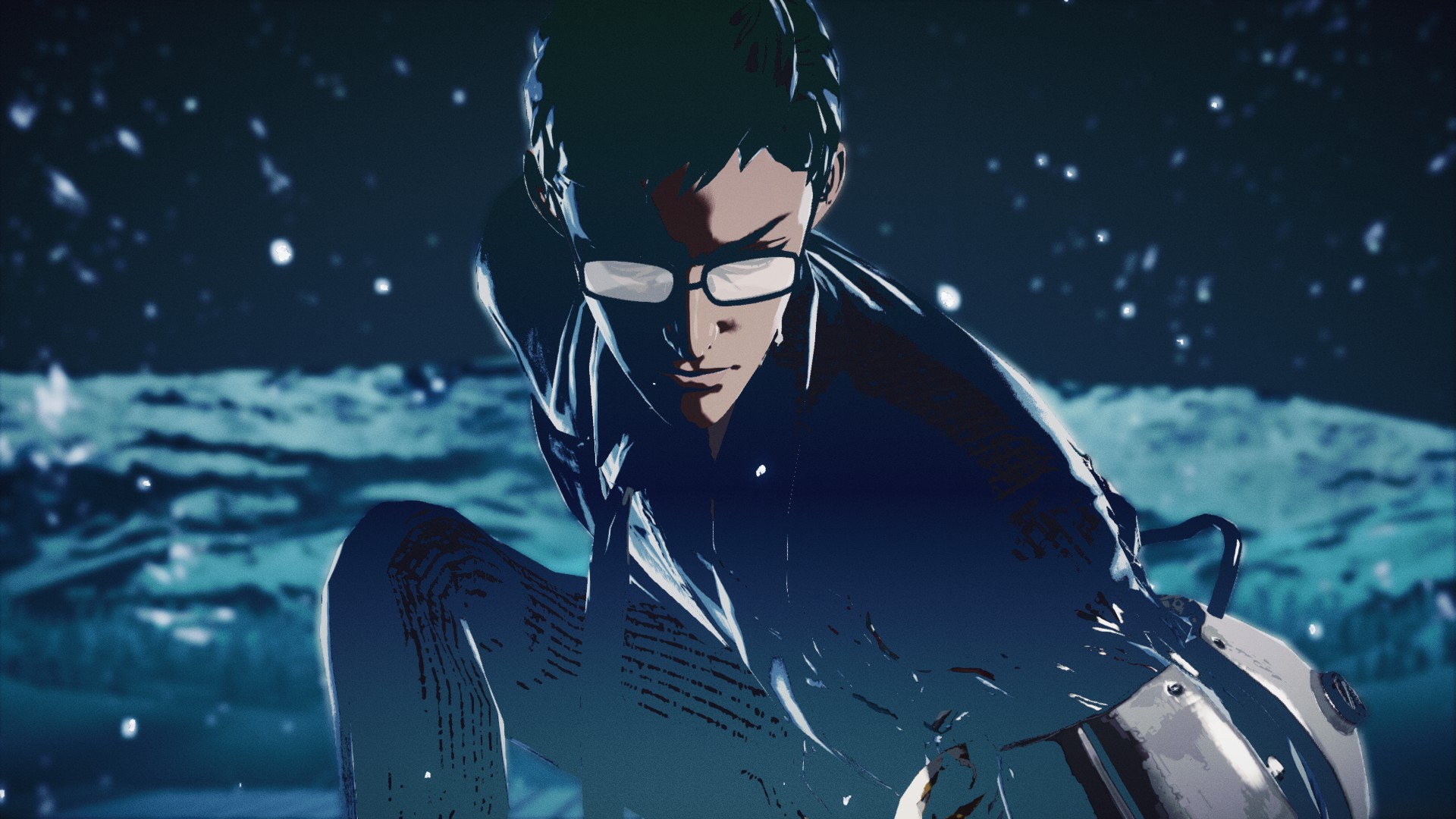 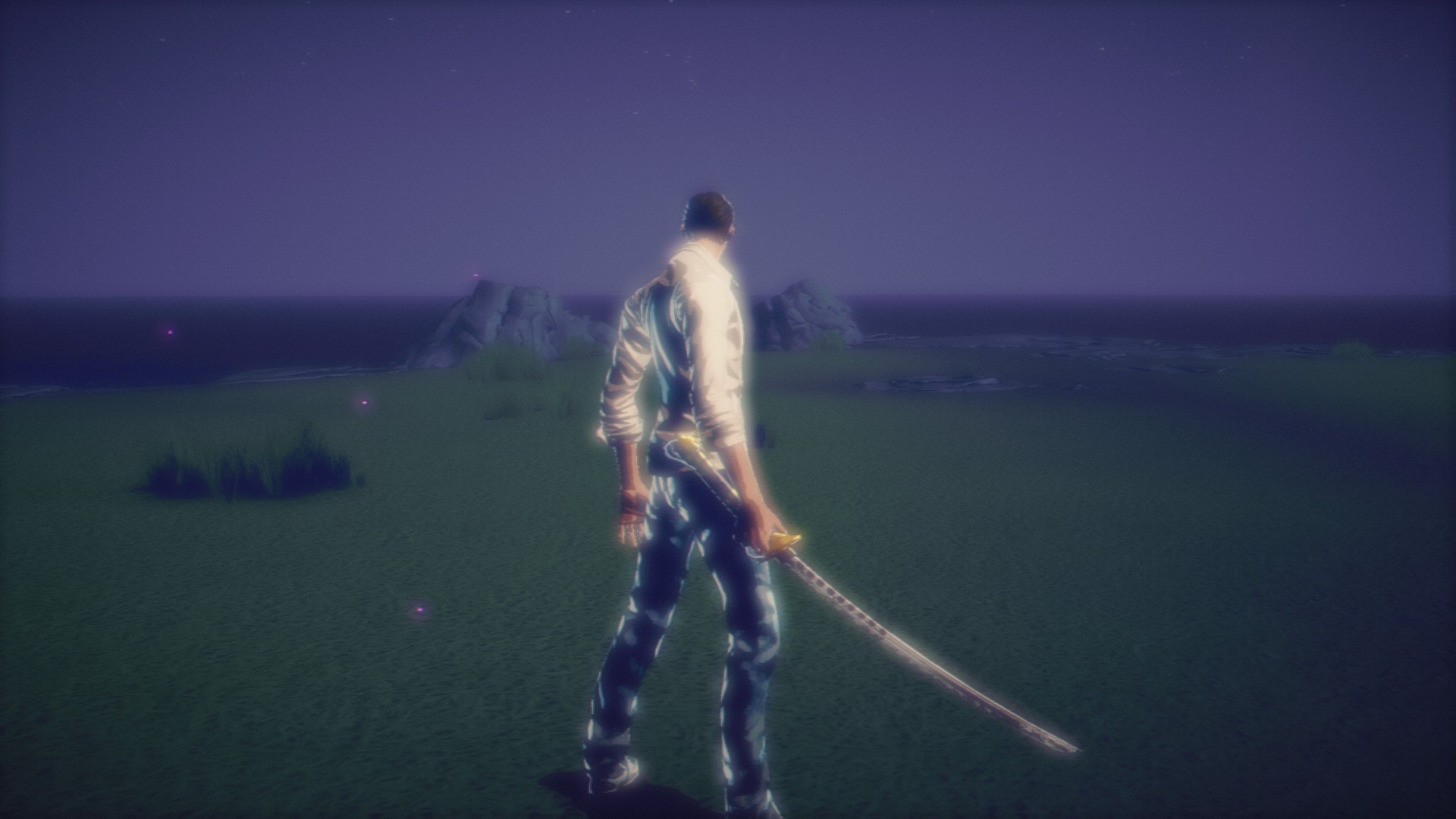 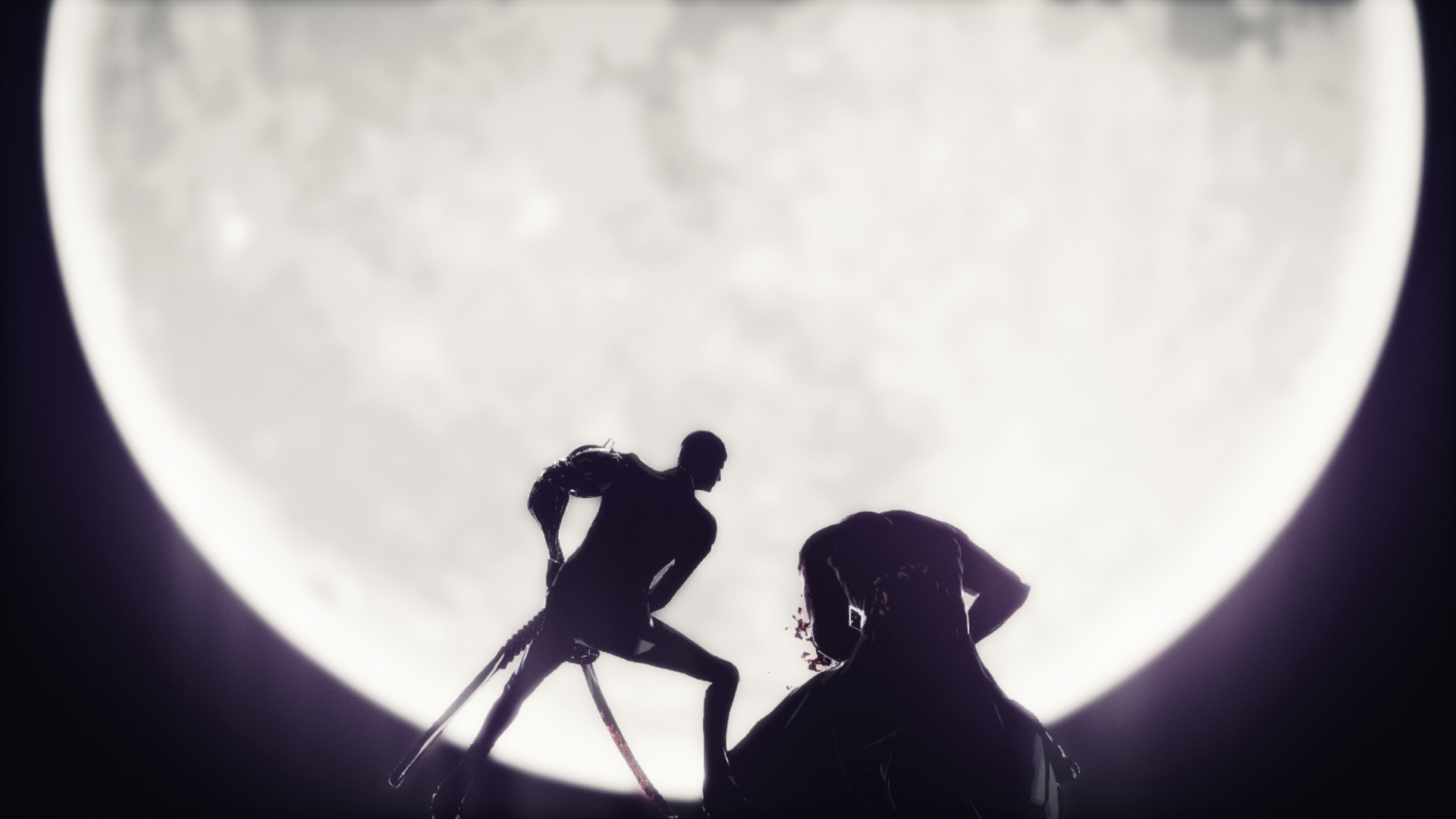 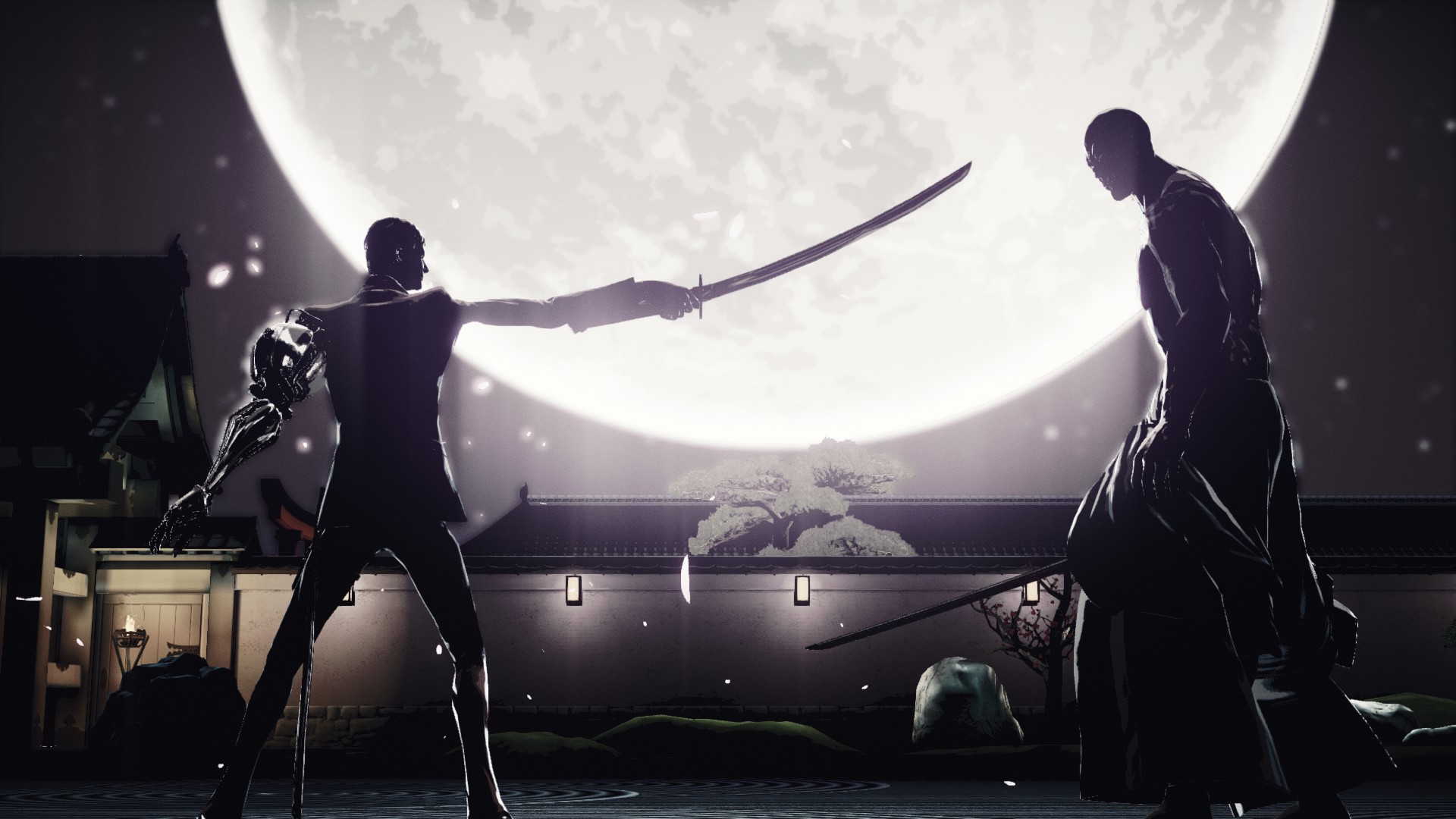 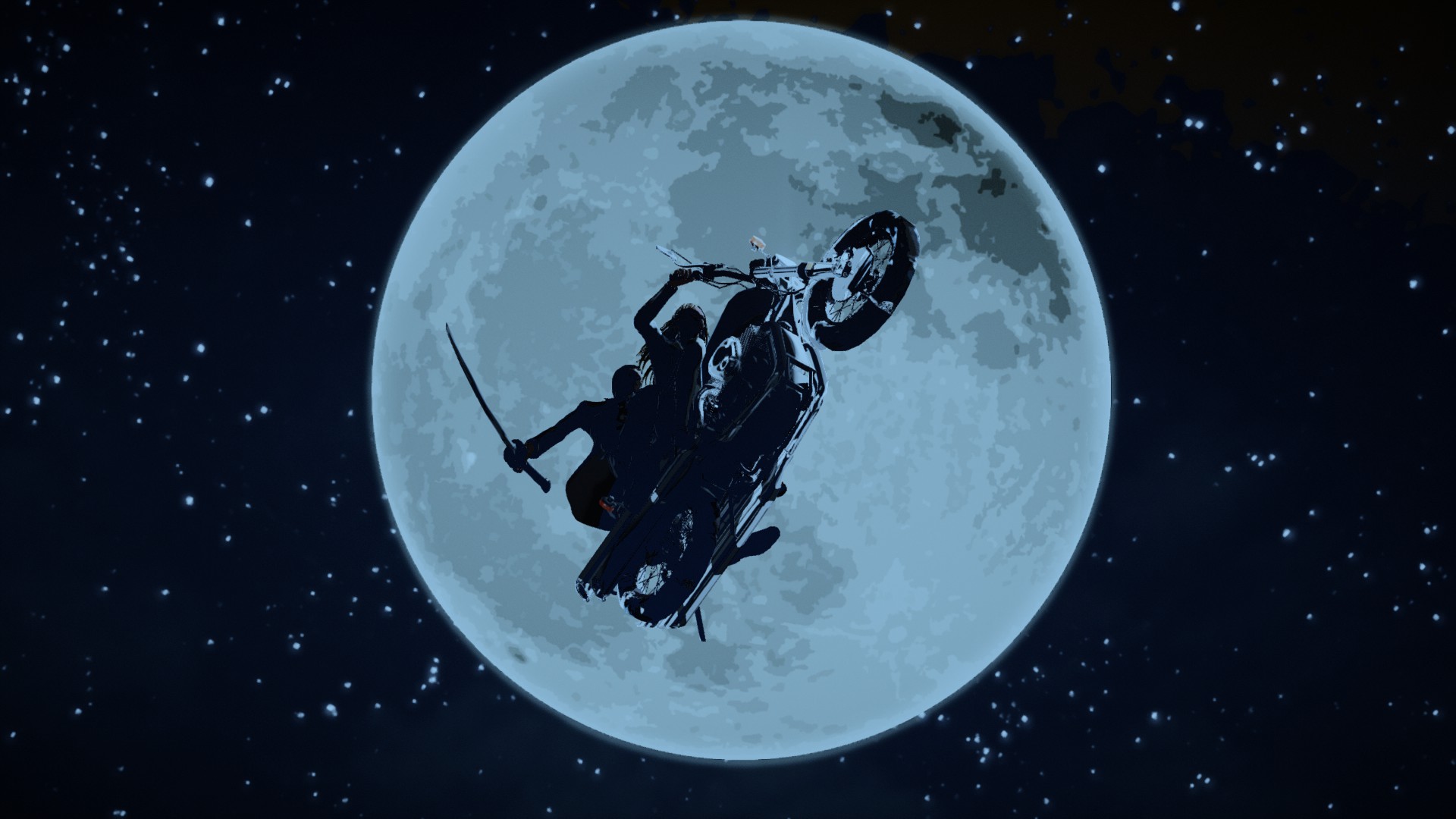 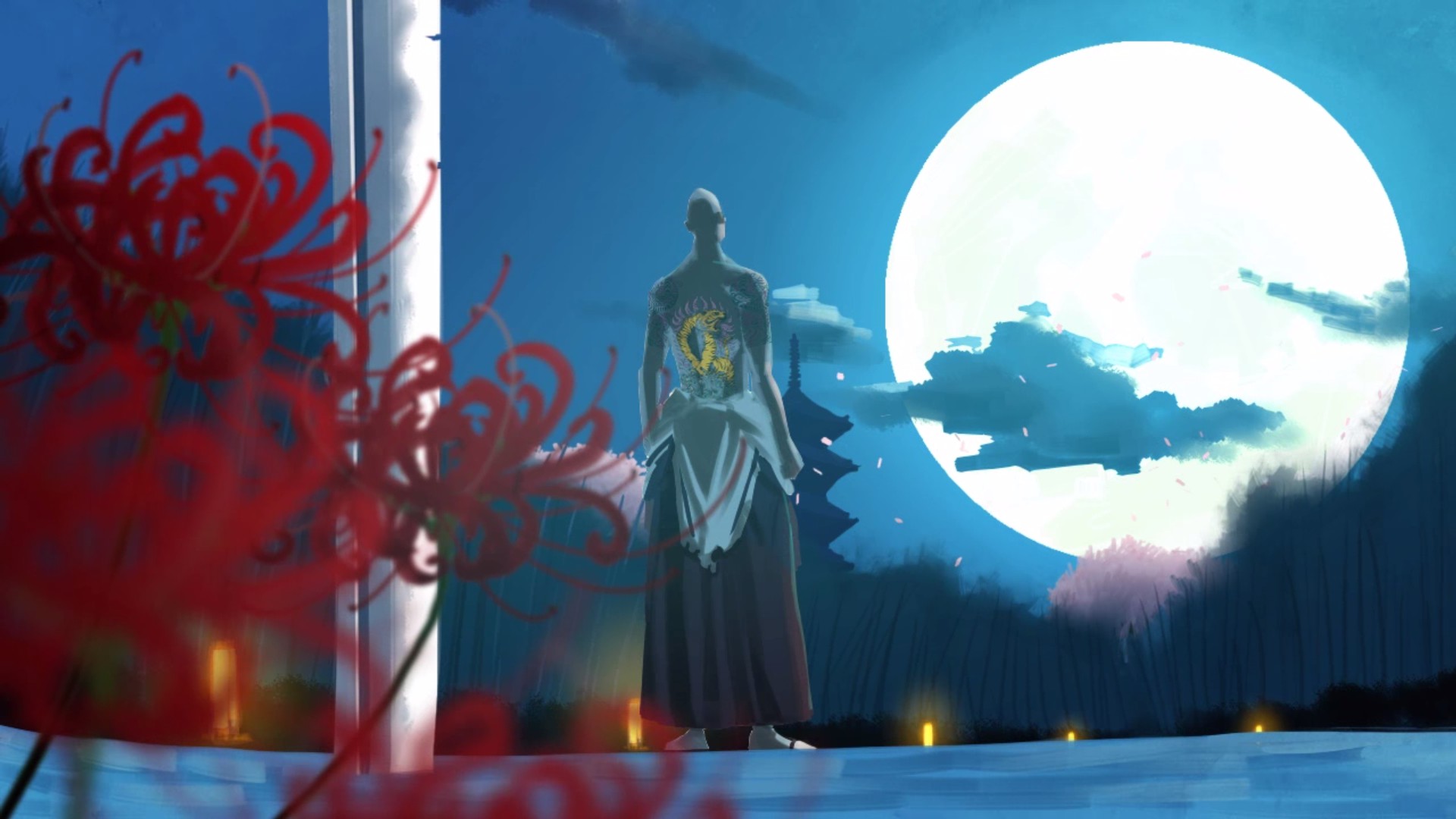 Finished Killer is Dead on Very High difficulty! I LOVE hack and slash games. And this one is a really good game. I like how it has unique visuals and the story telling is kinda unique too. Combat is fast paced but unfortunately it’s a button mash combat. Not that it matters to me though. You play as Mondo, a gigolo, who’s working as a executioner for a small company. And you kill stuff to earn money from government. Pretty simple haha
The game is kinda short and kinda easy aaaaaand it’s 30 fps locked. That’s the only thing I don’t like. Much recommended! 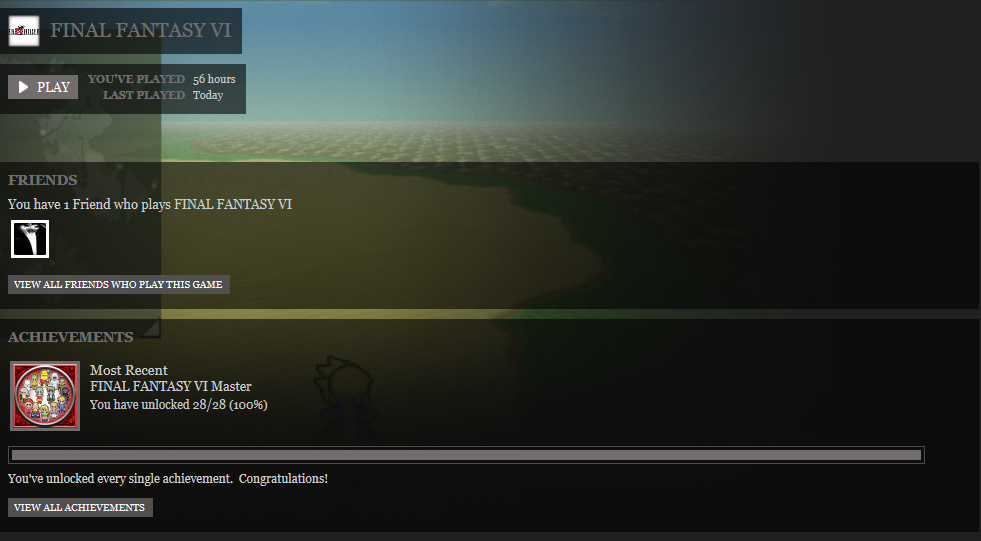 Finished Final Fantasy 6 or Final Fantasy 3. Whatever, I finished it. This game is an asshole. And that’s pretty much it. Too many enemy encounters, too much to grind and the achievements are retarded. I had to play 40 hours of the game just to earn first achievement. Luckily, the achievements started to pop out every minute. If it wasn’t for that guide, I would’ve gone nuts. It’s a great game and definitely one of my favorite games ever. But there are few things I don’t like in the Steam version. The port is so so. No controller support, the visuals are worse than the original and Kefka is huge jerk. Other than that, I liked playing the game. But I don’t think I’ll ever replay it. Twice is enough.

Finished Quantum Conundrum. Excellent puzzle platformer and when I say excellent, I mean it’s better than Portal games. Excellent humor, puzzles, levels, story and visuals. Everything is so well packed into a game that I’ve had an extremely fun 14 hour journey. I’m highly recommending it to you if you like puzzle platformers or games like Talos Principle and Portal. The only thing I didn’t like is that later in the game there aren’t many puzzles and the game becomes only a platformer but well, it doesn’t matter that much anyway. 9/10 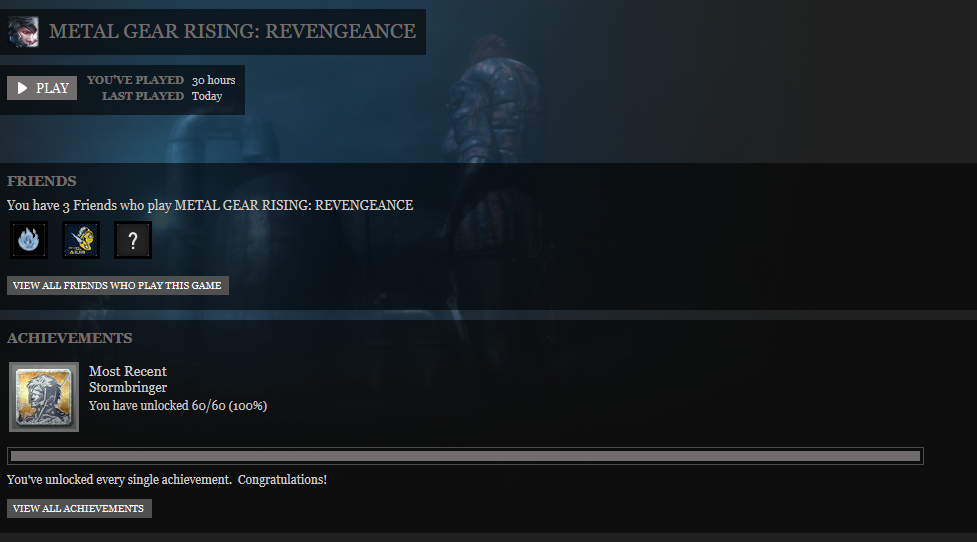 Replayed and finished the entire game on Revengeance difficulty! One of the best hack and slash games I’ve ever played. The whole game is so smoooooooooth and cool. And I want to be Raiden when I grow up! 10/10 for this one. I highly recommend it.

Katsuo stop! I only beat one game hahahah

Katsuo hey I’m playing that again too! I’ve been playing dark souls 3 mostly lately. It has been interesting me the most for some reason. I went back to areas to explore more and got some cool stuff. Made that pesky dragon fly away. Bloodborne was harder than this game so far

This is a good game though I enjoy it. I got some spells for my offhand so now I’m a theif with zappies

ShiftySatchmo I wish I could upvote the comment more than once xD
Btw, the Dark Souls 3 DLC will be different from the main game. Miyazaki said the DLC will have a different feel from the other Dark Souls games and it will come with new bosses, maps and weapons! How am I supposed to find money for all the games that are being released this year???!??!
And when you talk about difficulty, try Dark Souls 2. That one is just easier than The Banner Saga on easy. 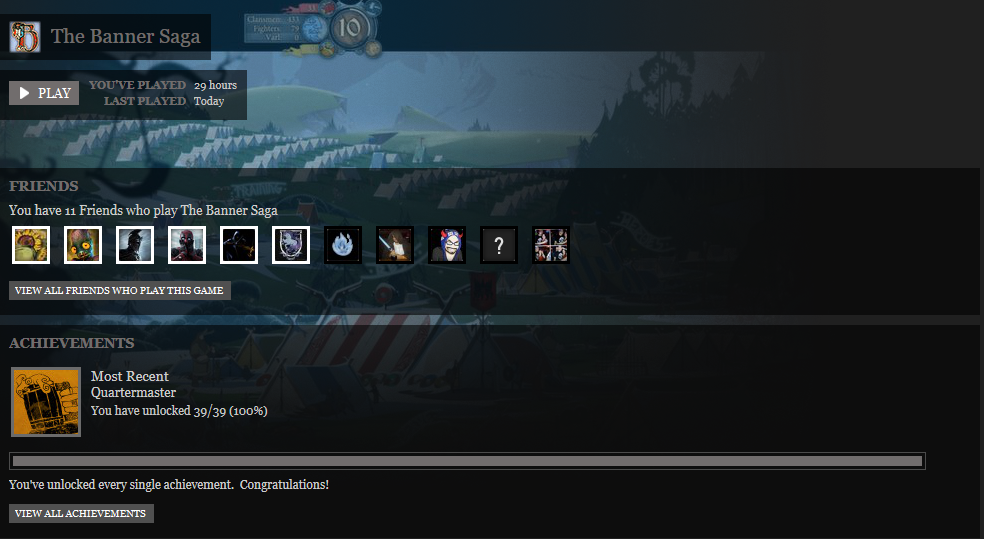 Finished The Banner Saga on normal and high difficulty.
I think everyone played The Banner Saga by now. Won’t write a huge review so I’ll keep this short.
The Banner Saga is a great turn-based RPG. And whoever likes Nordic themed games, would definitely like The Banner Saga. BUT…yeah, there is a but…I don’t think I’ll ever replay the game. The reason of this is because I find the characters in the game extremely bland and soulless. None of the characters impressed me with their personality and basically, I can’t even remember a single character’s name in the game because none left a “strong mark” in my memory (memory yeah lol like you have that). The story is extremely well written but sometimes I can’t keep up with the multiple story changes early in the game. The strong point in the game is the turn based combat which is pretty damn good. I recommend this game to everyone who wants a excellent slow paced turn based RPG. Basically, sit back, chillax and enjoy the game. 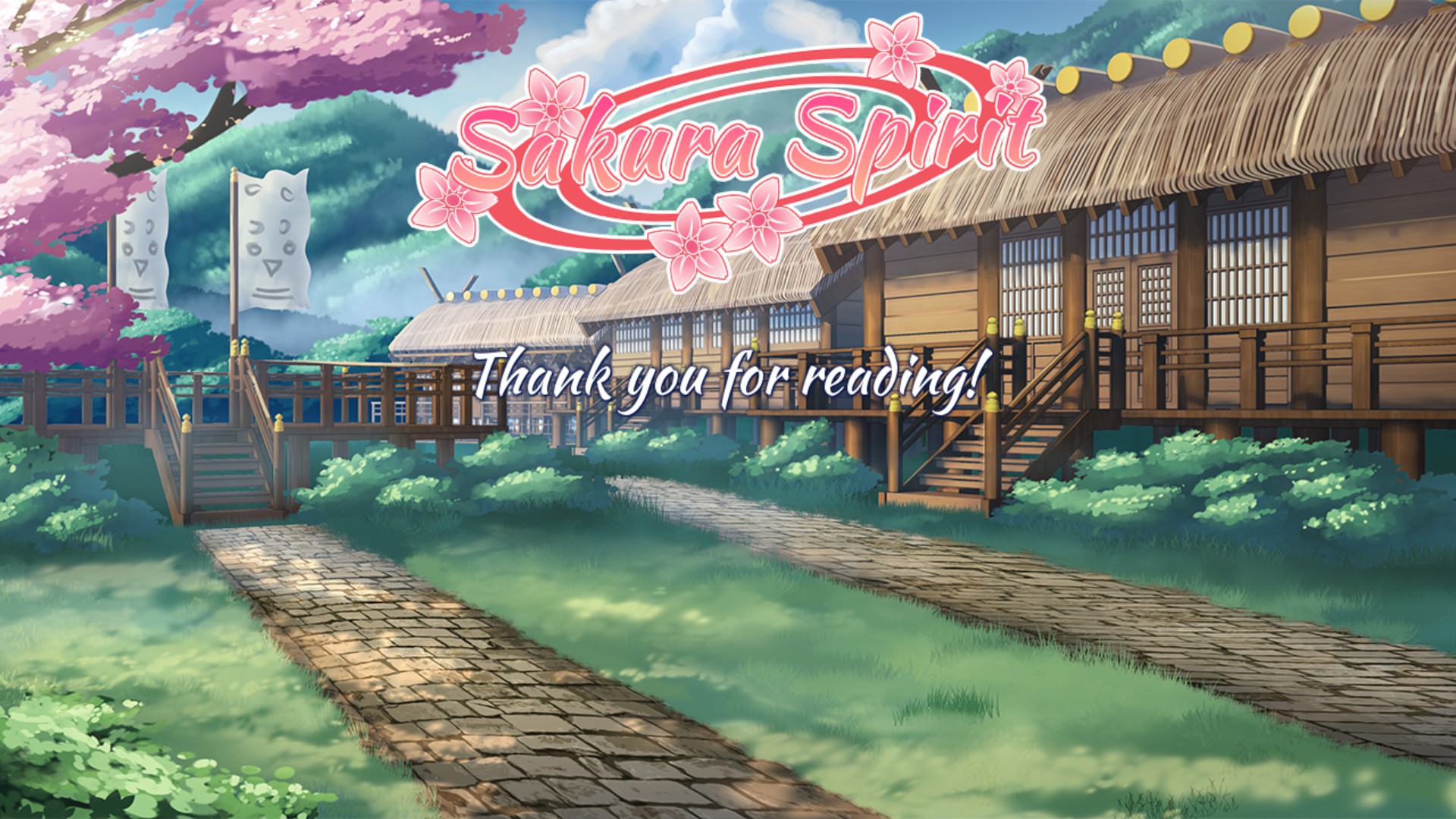 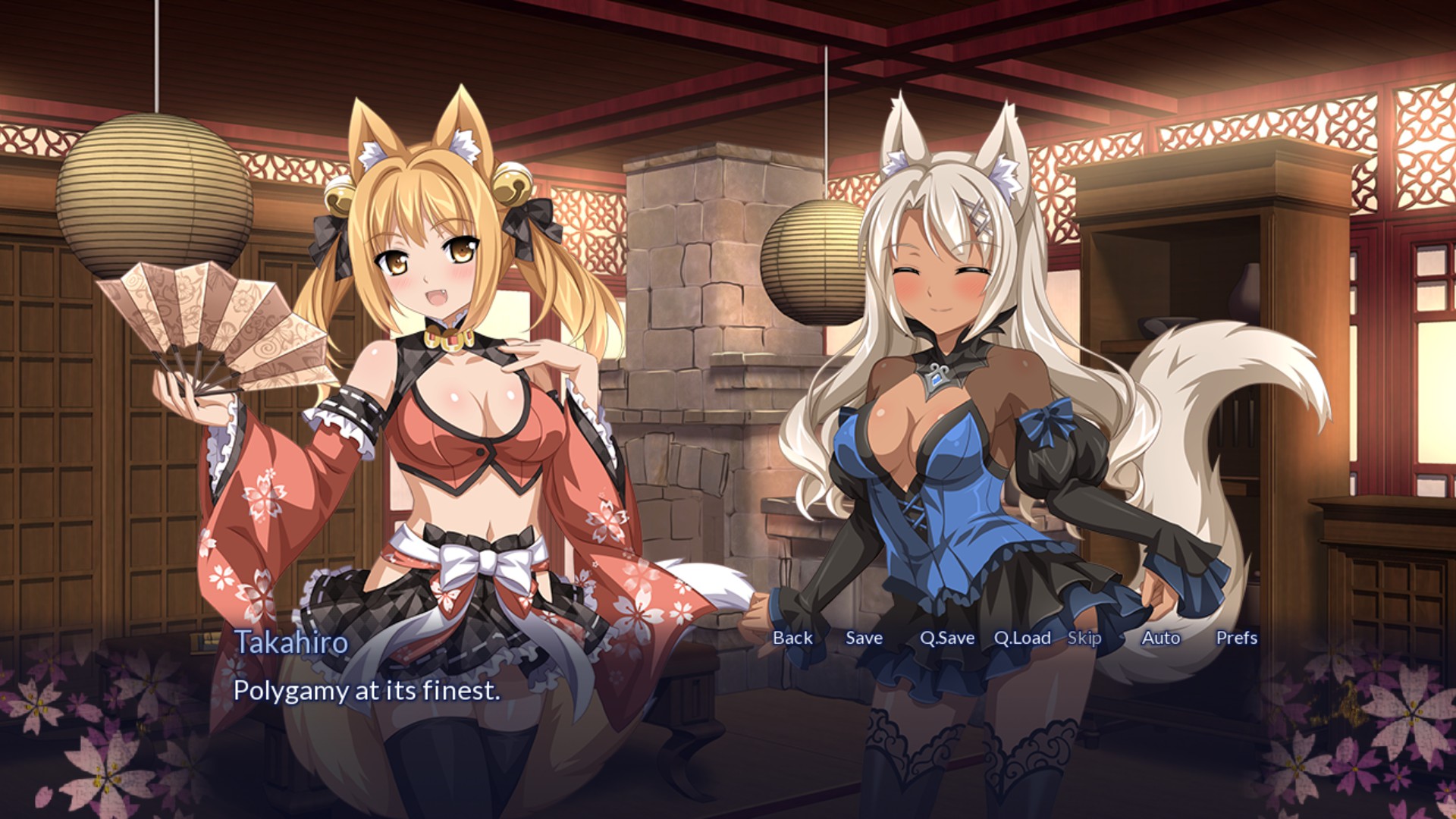 Finished Sakura Spirit! This Visual Novel is awesomeeeee. It has a lot of “nudity” but the storyline is really interesting and I really enjoyed reading it. Whoever likes visual novel, Sakura Spirit is a great one to check out!