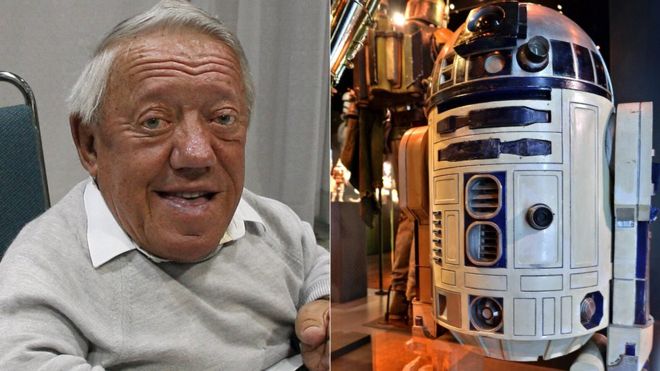 29 minutes ago
From the section Entertainment & Arts

British actor Kenny Baker, who starred as R2-D2 in six Star Wars films, has died aged 81 after a long illness, his niece has confirmed.

Baker became a household name in 1977 when he took on the role of the robot in the first Star Wars film alongside Anthony Daniels’s C-3PO character.

He went on to appear in The Empire Strikes Back and Return of the Jedi, as well as the three prequels.

Born in Birmingham, Baker’s other films include Time Bandits and Flash Gordon.

His agent Johnny Mans said the actor had been ill for a couple of years, and had been cared for by his nephew.

Baker initially turned down the role of mischievous droid R2-D2, famous for his whistles and beeps. In an interview on his website he recalled telling the film’s creator George Lucas: "I don’t want to be stuck in a robot, what for, for goodness’ sake?
‘Like a boiled egg’

"I could work all hours, so I was a godsend to them. They’d made the robot in rough form and I was the only one around at the time that was just right for it.

“I got into it and they put the lid on me like a boiled egg.”

In another interview, Baker said Sir Alec Guinness’s decision to appear in Star Wars convinced him to sign up.

“I thought if Alec Guinness is in it, he knows more than I do about filming, that’s for sure. It must be a decent film otherwise he wouldn’t be in it.”

Ewan McGregor, who played Obi-Wan Kenobi in the three Star Wars prequels, said on Twitter: “So sorry to hear about this. It was lovely working with Kenny.”

The studio behind the original Star Wars films, 20th Century Fox, tweeted a still of R2-D2 and C-3PO and said: “Rest in peace, Kenny Baker, the heart and soul of R2-D2.”
Image copyright Getty Images
Image caption Baker was a guest at the premiere of the latest Star Wars film in London last year

Meanwhile, actor Daniel Logan, who played Boba Fett in 2002’s Star Wars: Episode II - Attack of the Clones, tweeted: “So sad to hear one of my dearest friends passed away. Rest in peace Kenny Baker. Love you. Will miss you!”

Despite the fame R2-D2 brought him, Baker told the BBC in 2001 that his own favourite screen role was as Fidgit in 1981’s Time Bandits.

The comic fantasy about a boy who joins a group of time-travelling dwarves who hunt for treasure to steal starred Sean Connery and John Cleese.

“The director Terry Gilliam’s such a nutcase, he’s so enthusiastic, you can’t help enjoy it. It was just a fun film to make,” Baker said.
Fan conventions

A father of two, Baker lived in Preston. His wife Eileen died in 1993.

In later years he appeared at Star Wars fan conventions across the world.
Image copyright Getty Images
Image caption In 1978 the footprints of R2-D2 and C-3PO were left outside Graumann’s Chinese Theatre in Hollywood

He was not involved in the latest movies in the Star War series and the role of R2-D2 will be played by British actor Jimmy Vee in the next film, due for release in 2017.

On his website, Baker also recalled working with comedians including Ken Dodd, Little and Large, Russ Abbot, Ben Elton, Dick Emery and Dave Allen and once meeting Laurel and Hardy.

He became part of a musical comedy act called The Mini Tones and later performed with his friend Jack Purvis in nightclubs.

Both men went on to appear in the original Star Wars film which was shot at Elstree studios in 1976, with Purvis playing the chief Jawa.

In 1978, as R2-D2, Baker put his footprints into concrete outside Graumann’s Chinese Theatre in Hollywood.

Baker also appeared on screen in Mona Lisa, Amadeus, and The Elephant Man.