Which one is it? What was/is your most favorite multiplayer game you’ve ever played? Is it an MMO, FPS, koala bear?

Team Fortress Classic was the one that stole my virginity.

But Soldier of Fortune 2 was my one and only true love. (clans, competitive, still have flashbacks)

Nothing has been the same since. I guess I did TF2 for a bit there. Did a month or so on Insurgency and the car soccer game. Some racing sims of course. But yeah. Soldier of Fortune 2 was the bees knees. mp_shop all day.

For me Without any question its Battlefield 3
Why? okay sit down guys lemme tell you the awesomeness of bf3.
Back in the days we didnt had much fps multiplayer game. the one we had is CS and COD4 both kinda hardcore competitive game (which is okay and fun enough). we didnt know that we can have “Freedom” in a multiplayer fps game. All we knew is a linear path to go point A or B to plant or defuse the bomb or maybe some random TDM in a very small map with maximum 24 players in COD4 and kinda more or less in CS

Then in October 2011 bf3 released. and it literally changed history to rewrite the history of FPS Multiplayer games. Why? imagine in a big ass map where you can use Vehicles like Attack chopper, Transport chopper, jet for dog fight, jet for bomb shell, jet for transport, various kinds of land vehicles (that list is too long) including tanks then transport boat, attack boat, tanky boat, spawn boat hell even big ass Aircraft carrier, and trust me i can continue this list more for a while. my point is in a big map like this 32 players fighting against 32 players with everything they got with all those vehicles. with 4 class everyone doing their job to bring WIN for the team its a truly amazing feel. and when you know all the players in both team i mean total 64 players when you know and fight against/alongside them i cant describe the feel man. i am glad i bought that game and i played that game for straight 3 years. this game is the foundation of our Clan too. so yah for me its Battlefield 3 <3 my most favorite multiplayer game of all time. and god i was very very very good at it :3 i would have continue my journey more but shit fucked up with my ex and you guys knows the rest. here is a screenshot from my clan’s another admin after i left the game. :3 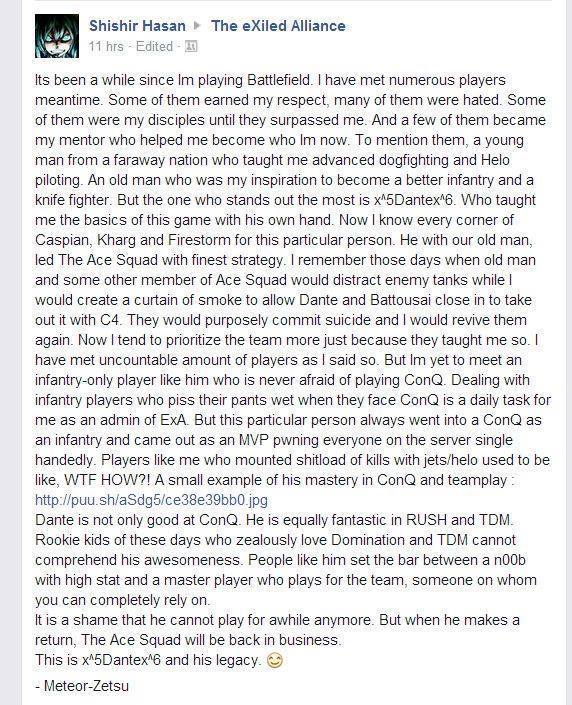 I loved Rainbow 6 Rogue Spear with @sYnCroSis! We destroyed everyone on MS game zone

Scorched Earth was the first one but it was a hotseat game so IDK if that counts.

First multiplayer game via serial cable on two 486 DX2 computers was DOOM. Now that was an experience to remember.

Lol everyone loved a different game.

For me it’s League of Legends. I’m still playing it every single day and I started playing it almost 10 years ago. Met some great friends because of league, met a girl that I almost married because of league. There were some moments where I absolutely hated league but there were some moments that league made my life better. I’ll quit league when Riot closes their servers. Which, at this point, won’t happen in another 10 years at least. It’s still the most played game on the market.

Growing up it was Halo 2, Call of Duty 4, and Warcraft 3 (DOTA mod). The game I played the most back then though was a browser mini-golf game (was going to link it but uhh http://www.playforia.net/). I made youtube video montages of all the records I set or tied on certain tracks in that game and made a lot of good friends back then.

Post highschool I spent a lot of time with Team Fortress 2. The orange box was the first game I bought once building my first ever gaming PC.I played TF2 so much and I still have it on my HDD just in case I ever want to jump back into it. Lately though not many multi-player games have gripped me like they use to.

Killing floor, I had a lot of fun with ex clan mates from all over the world we played every single day. Over 20 different countries … Time changed so much, most of them dont play anything anymore. Probably happiest time of my life, now I barely play it because I hate playing alone. Also playing with my boi Mili Vanili but that asshole works too much just like me now XD

Depends on the category:

Ghost recon. Many many hours wasted there.

Lineage II on private servers back in the day (2004ish-2009ish). Ran a dominant clan for multiple years.

NCSoft still has the classic server running and there’s tons of people playing it. I liked Lineage 2 as well but Aion won my heart at that time.

NCSoft still has the classic server running and there’s tons of people playing it. I liked Lineage 2 as well but Aion won my heart at that time.

I played that for a bit too. Bunch of open/closed betas and then 9months to a year on official.

Final Fantasy XIV, From the day I started playing 3 years ago till now I have been hooked! Star Trek Online when it first came out untill F2P Beta Skill Change setup was good now its p2w trash ship cash grab.