Need some help about Cyberpunk.

So Finally Cyberpunk released and we are hearing mix reviews from everywhere…well idc i was enjoying but the game is getting unplayable for me. ik this game is unoptimized but my issue has nothing to do with that.

My issue is, i have huge bottleneck in this game. like huge…my cpu usage locked at 100% while my gpu usage gets not more than 55%…
i have around 10-20 fps specially when i drive…i tried to play for 40 hours but it feels like i cant do it anymore…its getting unplayable for me

So any of you knows any way to increase gpu usage so that i can get better fps? ik i sound ridiculous but i waited for this game for a while…dont wanna get disappointed like this

Try this if you haven’t already.

Turbo boost turned on, on your CPU?

idk i dont think so…whats that…should i do it? how to do it? 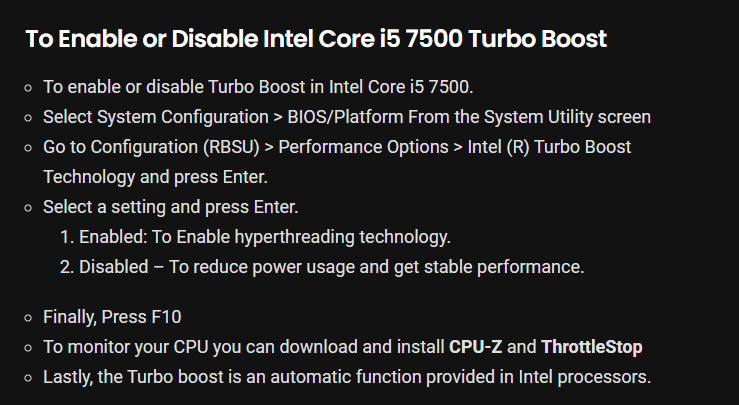 It’s a safe overclock for intel CPUs. It doesn’t brick your CPU when overclocked. It’s a slight boost but should give enough room for the GPU to get some extra fps.

so i should enable it?

I don’t see a reason why you shouldn’t. Again, it’s not something insane overclocking but still better than nothing. Also, before you do anything, take a look at your warranty if it’s covered after enabling turbo boost.

Well, then it doesn’t hurt to try. At worst, you might have slightly increased temps due to the CPU being overclocked.