Nintendo just announced the rumored “switch pro”. They’re calling it the “Switch OLED”… however it’s a huge disappointment. A slightly larger oled 720p screen (don’t care, I play docked). Bumped internal storage from 32gb to 64gb (don’t care, everyone still has to buy an sd card when the internal storage is still nothing). A better kickstand (don’t care, I play docked). Put an ethernet port on the dock. (don’t care I already had a usb to ethernet dongle). But the biggest disappointment: Same soc and no dlss. The only thing I wanted. DLSS. So I could play on a 4k display instead of an el cheapo bitch tier small 1080p monitor I bought specifically for old consoles so that games wouldn’t get stretched into a vaseline smear. Guess I’m sticking with playing nintendo games on a small 1080p display until they release their next thing.

It is so annoying that they didn’t make a it a Pro model with a higher rez undocked mode.

Even if you played handheld mode, the “upgrades” are just a joke. They are soooo out of touch. They either don’t care or just don’t know that people want 60 fps in games with a resolution that’s not a joke. I was done with Nintendo before but now I’ll pretend Nintendo doesn’t exist at all

I’m a Nintendo fanboy and even I know this is trash. I guess if mine breaks or something I’d get it maybe.

I guess when ps5/series x eventually become the main consoles, nintendo will lose most of the 3rd party titles. Even last gen can barely be ported to switch.

I only have it for the first party stuff. Maybe they will still make a “pro” who knows?

I only played exclusives on there too, but in order for a platform to survive you need both.

Indie shovelware trash from the eshop is not enough for the platform to survive? :]

A lot of aaa games get released on all ps4/xbone/switch. Some can’t be ported. When it’s ps5/xsx/switch none of them will have switch versions. Some people are sold on portable aaa. Though the switch has a big enough install base, I think it’ll be “fine”… still I was hoping to get rid of the craptastic 1080p monitor from my setup.

Do you have one?

No but BeatEmUps talked about it and I’ve heard that the cable is actually legit. 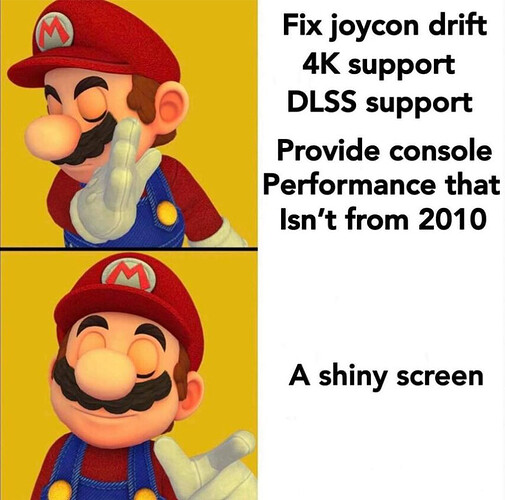 The new switch is also shipping with the same old joycons. So joycon drift will still be a common problem.