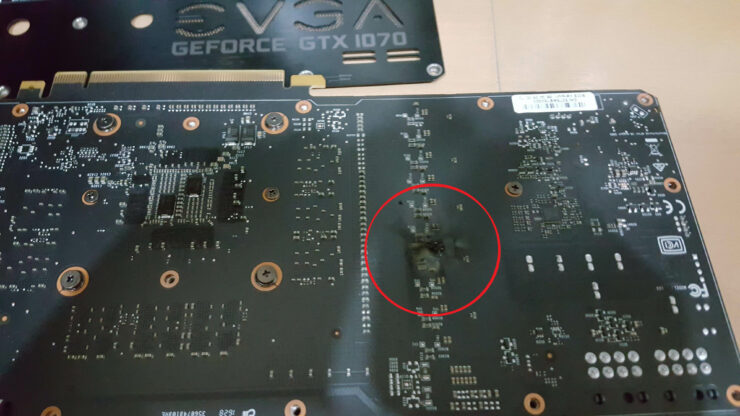 A devastating issue plaguing Nvidia GeForce GTX 1080 & GTX 1070 cards from EVGA causing them to burn out and die has been discovered.

Zmajuga Yeah… not a good look, but doubt that all the facts are out there yet. Wondering if it’s a bad manufacturing run as opposed to a design error. If the components were substandard & that’s what’s causing the issue as opposed to a poor decision to not cool the VRMs properly.

But at the moment I’m watching the shit get flung about from the fanboy camps as per usual.

oh wow. but this is just EVGA, right? Should I still be ok if I was going to get one of those Zotac Amp Extremes?

Polekatt
As far as I know it’s only EVGA.

funny part original story started at Tom’s Hardware Germany and FurMak testing of EVGA cards … now we have a viral story about hundreds of burning cards … I’m not sure what to think about this … It might be that this is a factory error on VRM which slipped in the production and testing … But also can be a bullshit … I will not defend EVGA … but who in sane mind, test GPU with FurMark bench … Problem which is bugging me here, is that there are several versions of the same story on the Internet … One initial story talks about Furmark testingand VRM temperature and burnout of EVGA GPUs … now I’m reading this article … with similar story … but different version of event … so I’m wondering who is dumb here …

ShiftySatchmo Funny thing is I think there is a GDDR5(X?) change happening where Samsung will be providing the chips… EVGA does not source form Samsung XD

Everything is blowing up.