So this is my next game! At a glance it just seems like another warriors game, but holy shit is this the least warriors warriors game ever! It carries a huge chunk of Persona 5’s systems along with it. It’s like they just swapped turn based combat for warriors combat. I don’t even know how to explain it, you don’t even have to like warriors games to like this game! It just doesn’t play like one. It’s also a direct sequel to Persona 5…also don’t even touch this game if you haven’t beat Persona 5, you’ll be so confused with the story to the point you might not even like it. I’d also recommend putting some other games between Persona 5 and this one to avoid franchise burnout.

Currently running at max settings at 2160p60 (only gives you a choice of locked 30 or locked 60, which is shitty). It has a built in DSR, but with my hardware anything above 1x res multiplier results in sub-60 fps…which it shouldn’t but this engine is unoptimized. Given the art style and lack of physics, I should be able to run this at 8k>100, but whatever. 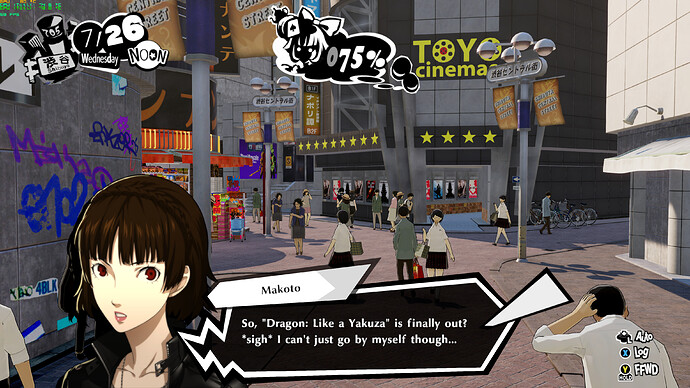 After the upgrade I can now run this game with a 2.0x res multiplier while maintaining a solid 60.

I suspect Koei Tecmo didn’t work on this game at all. I think they just licensed their fighting system to Atlus who significantly altered it. There’s no way KT had the competence to do any of the other things found in this game. An exceptionally good sequel!

There are some good Koei Tecmo games though. They just don’t know how to port games to PC.

Even on the consoles 50% of their self published titles aren’t worth money.

So I beat it last night. It’s fucking good! If you’ve played P5, you need to play this. It’s not a warriors game. Recommended to anyone who played the first game. You’ll be completely lost if you haven’t.

I fucking love Persona games. This one is as good as Persona 5 (and Royal). Just finished it on PS5.

I couldn’t get into it. I didn’t like the way it played.

I understand. I think the standard turn based combat was way better than what we have in strikers. Still a great game though