Gamer Challenge time. Thought I’d wrap up the last quarter of the year in a single post… because it was only one game! 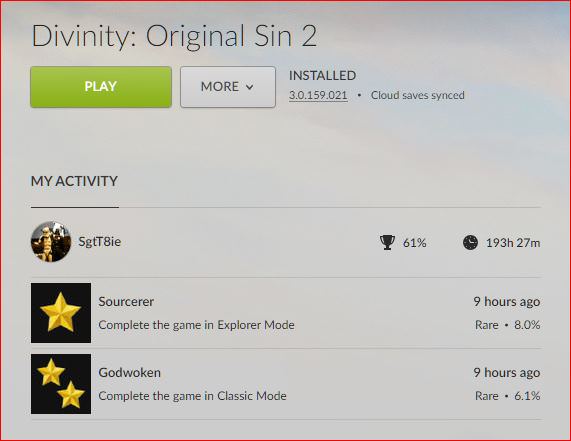 Divinity:Original Sin 2 aka the greatest RPG ever made! 193hrs of playtime, admittedly about 15-20 of that was multiplayer. So ~170hrs it took me to beat the game at the middle difficulty… and I know for sure I missed stuff out.

The reason the game took so long is a combination of it’s sheer scale & its difficulty. There was a lot of reloading due to death & destruction and trial & error… a lot of error. I spent 30hrs in the starting Act, which is essentially the introduction/tutorial, that’s right the 1st chapter is longer & more complex than the majority of full campaigns out there.

The game itself is an isometric cRPG, with heavy emphasis on RPG. Larian has outdone themselves with creating a game engine that leaves everything up to player choice while letting the main story play out as well. They’ve attempted to leave backdoors and alternate story branches throughout the game so if you aren’t careful & accidentally (or on purpose) kill or alienate a story-centric character, you’ll be able to continue the main story by searching around or asking questions, investigating their houses etc. this way you don’t need to reload & your actions appear to have importance. That’s not to say that you won’t be punished, maybe missing out on some loot or side missions & XP, you never can tell exactly what result your dialogue options will bring.

Characterisation… wow, every character, including animals, is voiced (barring some glitches) and the voice acting is amazing. There’s still some generic overlap with the run of mill inhabitants i.e. Citizen, fisherman etc. but every named character is completely unique & the voice actors do a superb job. Emotions & nuance drip from the dialogue & if I had my way I would have sat down & listened to some of the characters’ life stories for hours if the game had let me. If you have a character with Pet Pal, they can converse with animals & again there’s so many hidden gems to be found. Rats are clever & imperious (though one in particular is a gorgeously characterised Rattus adventurus who wants to listen to your stories of heroism, as she’s too old to continue her questing days). The dogs are fun & loyal & sound exactly how you think dogs would talk. But my favourite by far were the owls… just wonderful.

In terms of companions there’s a set of 6 possible companions (and you can choose to be one of them yourself during character creation) with Origin Stories, these run parallel to the main story & are unique & interesting.

My main character for this first run-through was a dwarven 2H specialist I named Jhick Rhames. He ended up being a heroic nugget of rage & was always at the forefront of battle. 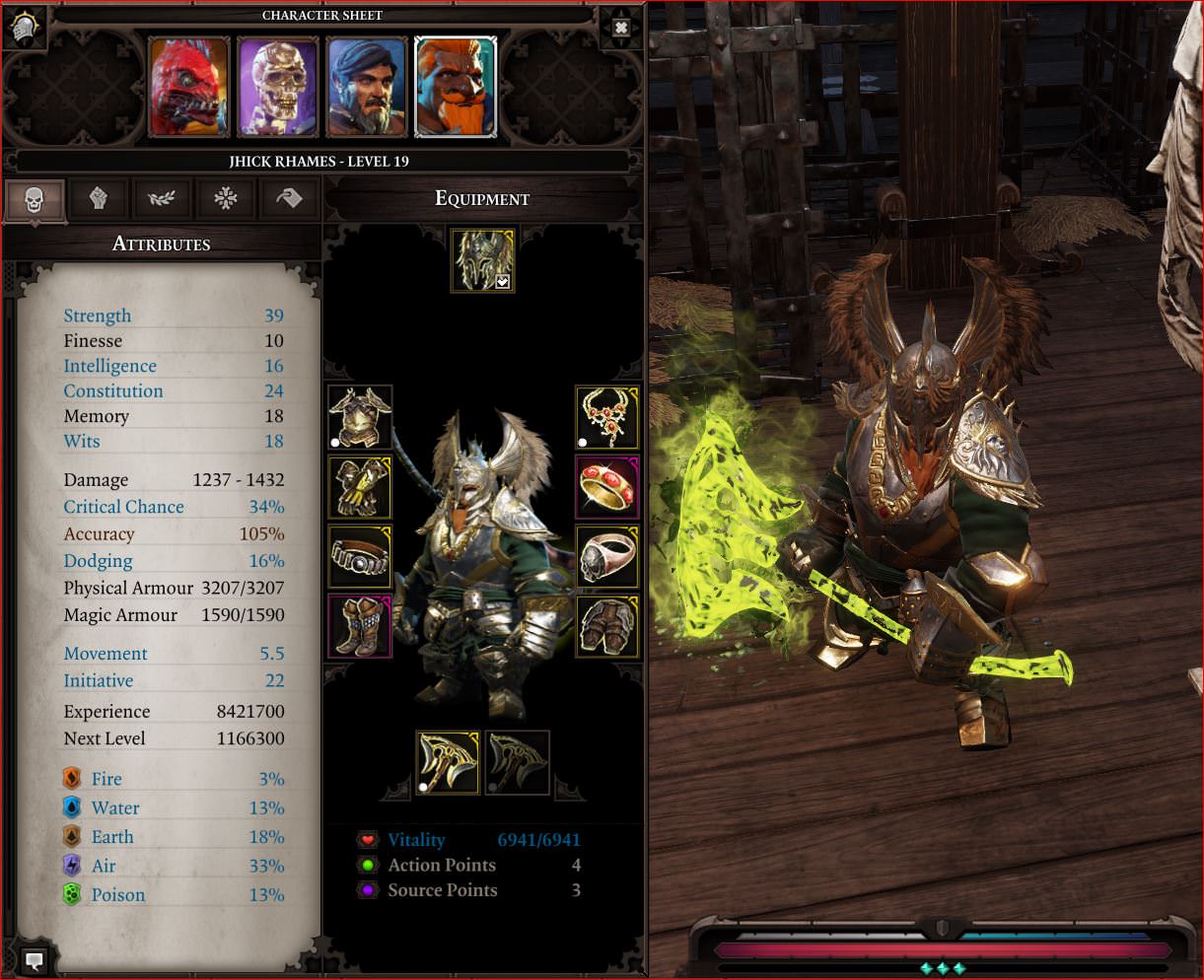 Once you complete the first Act you receive a magic mirror that allows you to respec your characters anytime you want, as many times as you want. This gives you the ability to experiment with your builds as much as you like & alter the composition of your squad as you journey through the story. For instance you could alter the elemental schools of your mage because you know that the next area is heavily fire-resistant but air-vulnerable, and then because you’ve done that, maybe your archer needs to step up & be crowd control or healer for a while. It sounds like it’s a noob-level cheat, but allowing experimentation for zero cost during your first playthrough is genius, as the enemies are varied & will kick your ass time & time again. Also it allows you change up your gameplay without getting stale or boring.

As with the first game the ability to stack effects & environmental factors is very important, and adds a level to the tactical nature of battles. Combat is resolved in a turn based order with characters having a set amount of Action Points available & each skill requiring a set amount to perform it. The effects of explosions, clouds and puddles are well animated as well as the status effects that can be applied during combat.

Multi-player… there’s three forms of MP in the game. The first is a drop in/out mode that allows you to take control of a companion member of the other person’s party. The second allows a campaign to be set up & each player can create their own unique character for play in the campaign (unfortunately this character cannot be transferred outside of the campaign). the final mode , which I have not tried is a GameMaster mode where one player assumes the role of a GameMaster a la old school D&D & uses the in game engine to oversee the other players through a campaign of their own choosing, this seems robust, with plenty of GM abilities to deal with unexpected character actions. The stand out part of the normal multiplayer modes is that it utilises the freeform engine of the game to it’s best ability, allowing sabotage & derailing of the other players. Pickpocket from a trader & sneak the stolen goods into your teammates pockets, forcing them to get arrested. some NPCs are sympathetic to one Origin character but another origin character may want to kill the immediately… it’s non-cooperative multiplayer at its finest.

This game is superb, there are bugs and glitches, but no game is without them & the level of design & the inclusion of a blossoming modding community mean this game is ripe for replayability. If the fact that it’s an isoRPG turns you off, you’re missing out on a bona fide classic.

For those that are worried about the amount of time it took me, I like to do everything on the first playthrough (which this game doesn’t let you do as some options stop others) and I swapped builds around with new gear & experimented with that. I have friends who have played through 1st run in <70hrs & a couple have pushed through it in less than 30hrs in repeat runs.

Ah…I’m waiting for ShiftySatchmo to buy that game for me. And AC: Origins. And Kingdom Come; Deliverance. And Vampyr. And Ni No Kuni and Star Ocean. I’m not greedy, I promise.

Jokes aside (heh yeah right), there is one thing that interests me…Do I need to play the first one in order to figure out what’s going on in the second one?

I was holding off until I actually play the first one. I’ve heard it is very good also. would say that is the thing to do?

katsuo No. The first will maybe fill in a bit of history & there’s a couple of recurring characters, that are a cool nod to the first game. But overall this game stands alone & does not follow on in story. It’s only #2 because it extends on the game format of the original.

polekatt … good question. The original is a very good game & a definite favourite of mine, but this game is in a league of its own. I’d just buy this & enjoy it. Then get the 1st one & see how it evolved

polekatt … good question. The original is a very good game & a definite favourite of mine, but this game is in a league of its own. I’d just buy this & enjoy it. Then get the 1st one & see how it evolved

But I already have the first one and started it. I wanted to finish it before starting this one.

polekatt hahahaha… then finish IT!