I watched this movie when it first came out and forgot enough about it to make it all worthwhile again. This movie doesn’t try to hide that it wants to be the next E.T. and does a great job at it. I also think this movie helped inspire a lot of Stranger Things as there seem to be a lot of similarities between the two. Without spoiling anything at all, it’s a great Summer style movie where a mystery is going on in small factory town and a group of adolescent friends work to get to the bottom of it.

This movie also has the most rewarding post credit video I’ve ever seen, so make sure you watch beyond the initial credits!

sYnCroSis Good timing, I am looking for a movie to watch next to my wine the evening.

It was a good little movie. I enjoyed it too. Well worth the time.

Is it on Netflix? I just watched Spectral on Netflix by the way, it was pretty good. 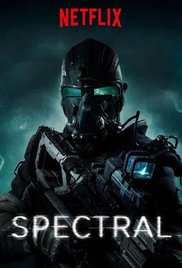 Spectral is an American military science fiction film directed by Nic Mathieu. The screenplay was written by Ian Fried, Mathieu, and George Nolfi from a screen story by Fried. The film stars James Badge Dale, Max Martini, Emily Mortimer, and Bruce Greenwood. The film was released on December 9, 2016 on Netflix.[3]

sYnCroSis Somehow I totally forgot it but watched it tonight. Really great movie. It reminded me of Stranger Things a lot as you said, but no problem with that, that series is awesome. So as this movie. I dont know how i missed this for so long. Thanks for the tip

ButtStallion haha yea glad it didnt completely slip through the cracks! I loved it, it was like our modern ET