OK I started this game last week and have played a wee bit. Thought I’d start a thread stating my opinions in a semi-review state. It will be a post as I play form so my opinion may change over the course of the playthrough. Additionally I’ll try to keep SPOILERS to a minimum, but they may drip in there from time to time. 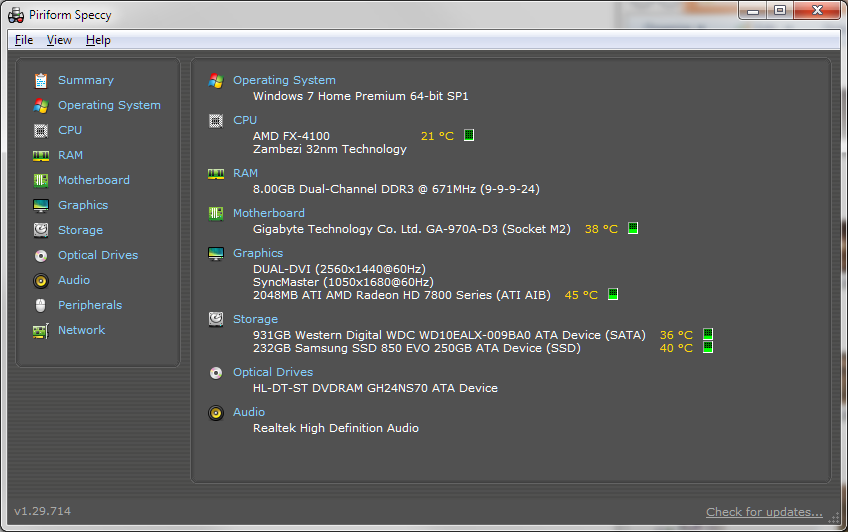 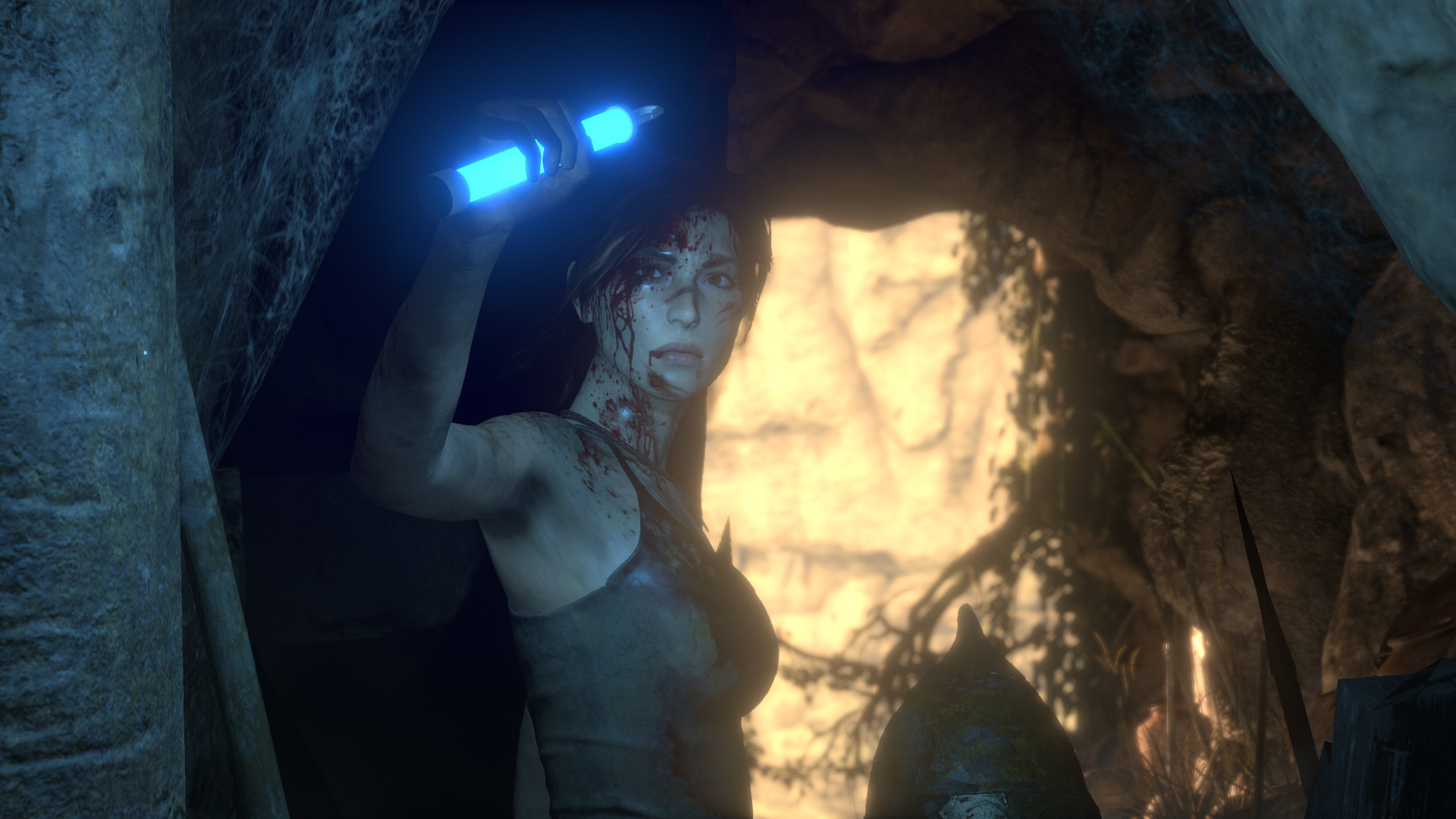 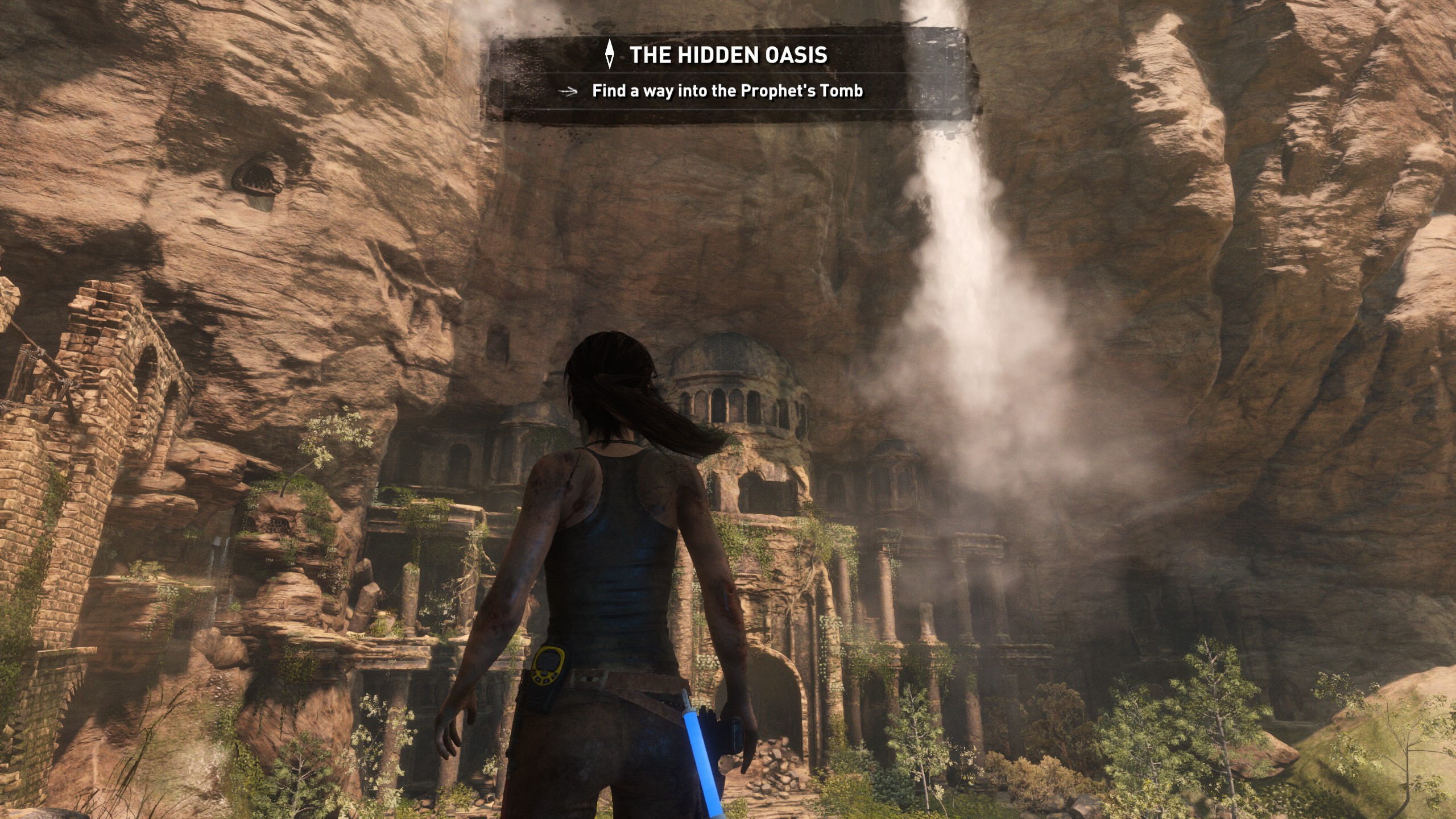 0_1468808614761_20160713124738_1.jpg2560×1440
The screenshots sure are pretty, but my gut feeling is that this game isn’t as well optimised for older machines, or maybe older AMD GPUs, as it could be. I ran the original TR on the same machine at about 45FPS (screen resolution also set to 1080 & TressFX off, but at medium to high) but this game just feels as if it’s chopping along very nastily. I believe that I meet “Minimum Requirement” on this PC but it feels as if the goalposts for “minimum” have shifted in the interim time period. At the moment I’m down to medium quality, 1920x1080 resolution with enhancements like Pure Hair Off and considering dropping to Low Quality to improve the stutter.

As for the storyline & plot so far… it just seems so generic & mundane. A checklist combination of the 1st game & generic pulp action adventure (ala Alain Quartermain or Indy J). Why does this game not grab the player immediately & slap you about the face with some awesome set piece? I want to be reminded immediately of how bad-ass Lara is & instead she’s stood there pouting on a mountain while the generic Pacific Island dude is carrying the only pack. Surely she could start off with the pack & still loose it in the first 5 minutes? Instead they seem to be content with a slow intro allowing you plenty of time to marvel at how well rendered the Siberian mountains are.

There’s some cliff jumping with requisite avalanches & collapsing ice sheets, before you get thrown back in time… to explain why you’re in the mountains. Needless to say there’s the introduction to the shady millenia-old secret organisation, Daddy issues & the separation from her friends so she get along & kick arse on her lonesome again, unfortunately nothing groundbreaking.

At least this time she’s happy to launch straight into being a cold blooded murderer, no crying over spilt deer blood here. If it’s a guy with a gun you either stick him with an arrow or break his neck, job done. Unfortunately the first major bottleneck (aka Mr Cuddly) was an desk thumpingly, annoying affair, probably due to my hardware issues & my admittedly poor coordination. I just spent 10 minutes running around in circles trying to pick up the cues that it was time to turn & shoot Mr Cuddly before he turned me into a shredded burritto.

For me I enjoyed the 1st games Tomb Raiding & so I’m glad there’s the return of the Challenge Tombs. While I get that it’s a experience/skill-progression focused game, surely that could be handled better. Has she forgotten all the skills that she learned on Yamati? Because its seems we have to re-learn them again.

So there’s my first thoughts on this game… it’s not bad, but it’s also not yet a worthy sequel to the first game. Only time will tell if it can win me over.

OK I’m now 10hrs into the game… and Lara is back searching for the Divine Sauce, which is in my opinion would be a close run battle between Hollandaise & Bechamel.

I’ve been able to take a benchmark run with some indication of my settings on my work PC: 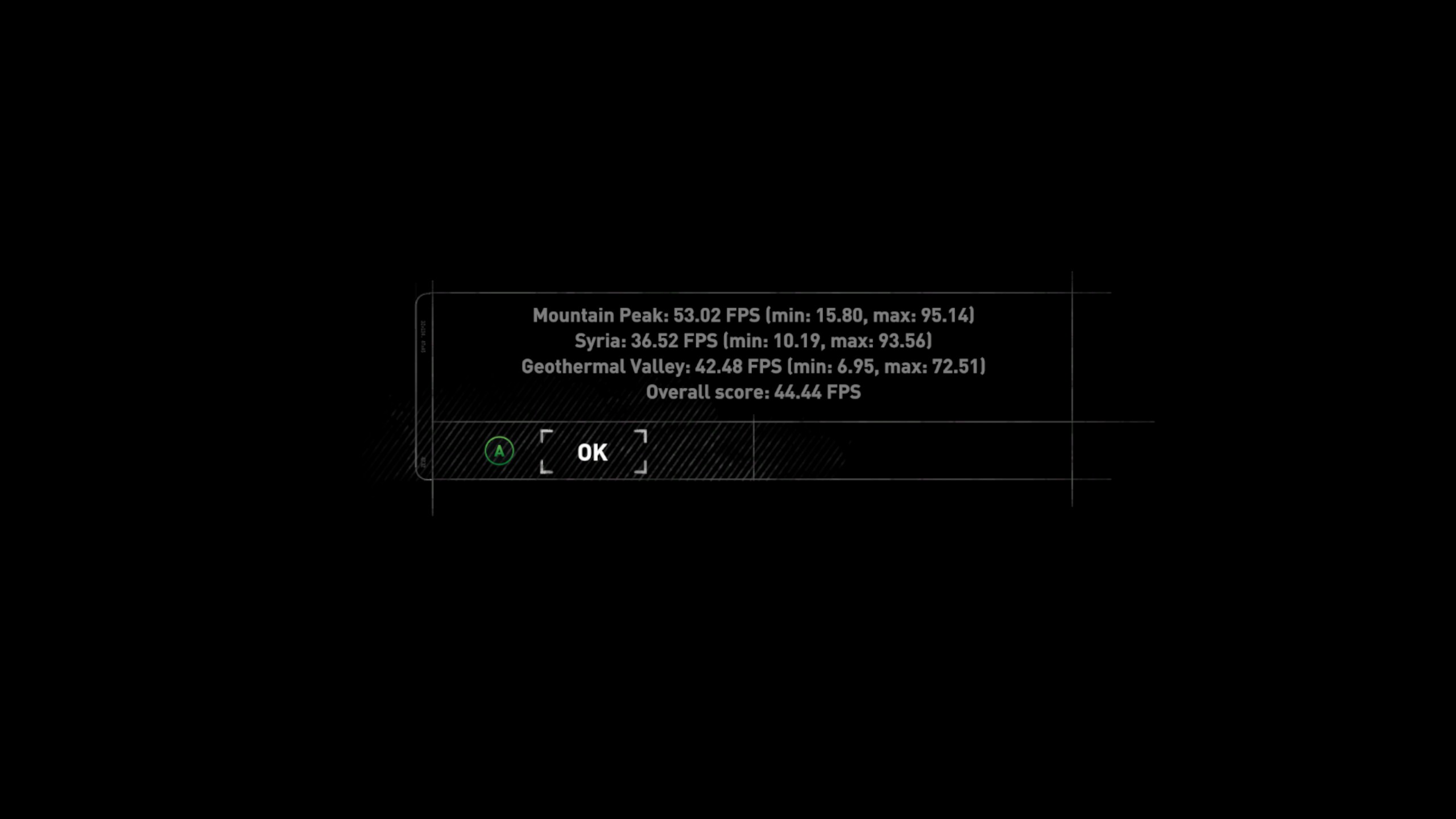 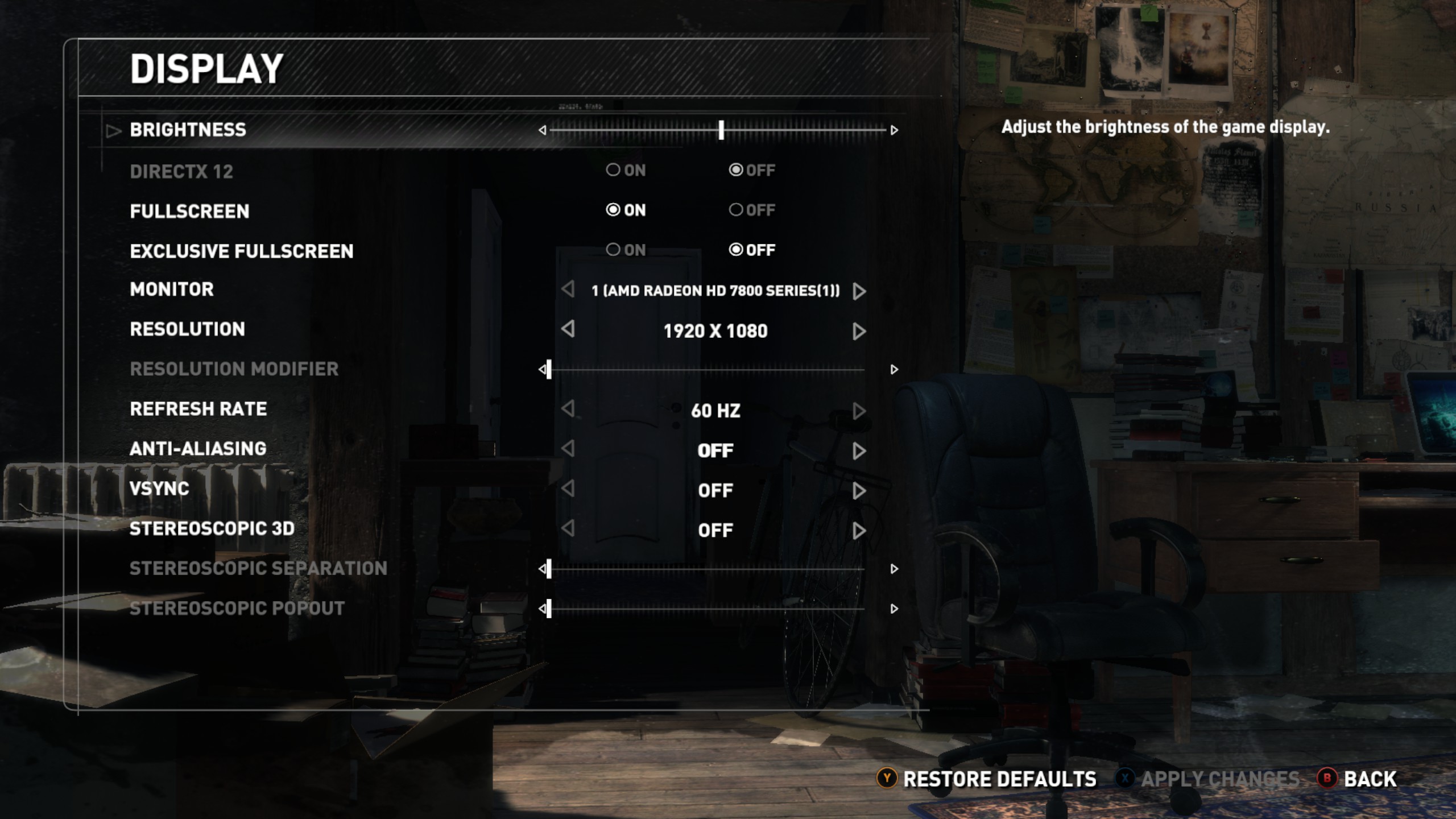 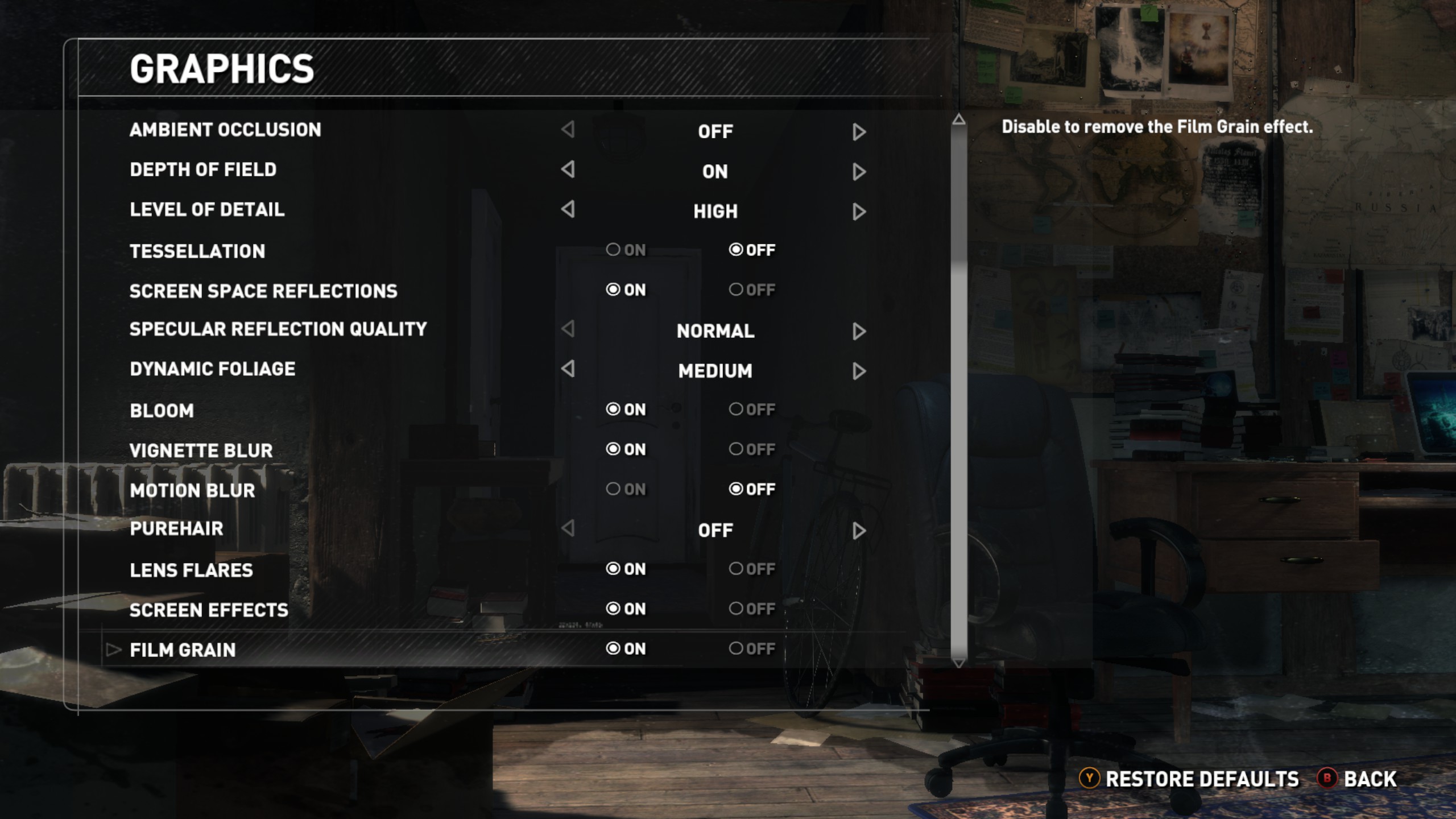 As you can see it can hit a playable average & max framerate but drops down into very choppy single digits when there’s a lot of effects happening. Also the whole hair effect is awful in this game, even with Pure Hair off, Lara’s pony tail bounces around like the torturous winds of Tartarus itself are blowing continually in her face. It’s distracting & just plain annoying, I’d have been happy for her to have the same plastic shell hair as all the NPCs because it would be less ridiculous during overly emotion fraught cut scenes. 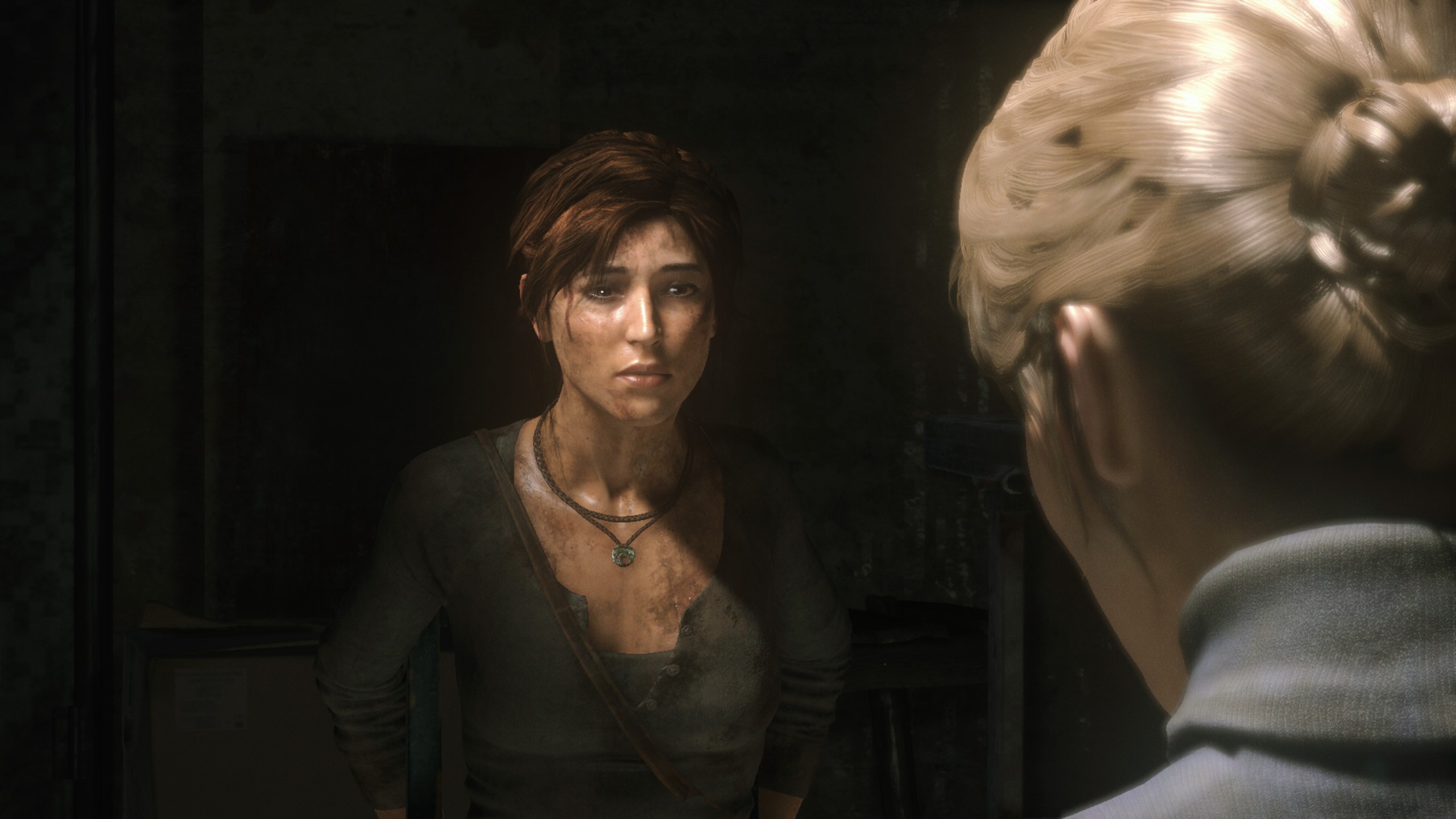 obxEDba.jpg2560×1440
Two more chapters down and the writing doesn’t show any chance in improving. The story is too cliche ridden with no hint of irony; it brings nothing new to the genre & is tries to unsuccessfully straddle the line between pulp campy action and serious character based drama. I do give respect for the fact she is mortal and they’ve kept the brutal death sequences. Despite what some overly-sensitive commentators think, her death sequences don’t equate to a torture doll simulator, instead they provide an actual impetus in showing that her story has high stakes. This is a very necessary narrative/dramatic requirement for story building. There’s no story as boring as one where the viewer’s central point of connection has no risk of danger or is all-powerful. This is why the Achilles Heel exists in stories, because otherwise we couldn’t relate to a struggle that is never in doubt, how boring would Superman be without Kryptonite?

A major gripe I have with the actual gameplay is the requirement to rely on “Survival Instinct”. This is the same cheap & nasty god-mode ability that almost ruined the Batman Arkham series as well as Assassins Creed. One click of the button & you see everything you’d ever want to. You can tell which enemies are safe to kill & which ones aren’t’… it’s ridiculously cheap & overpowered and is pandering to the lowest common skill set; I’m trying to not play with it but the fact that they chose to implement this system irks me. Additionally there are parts of the story that essentially require the player to use it. 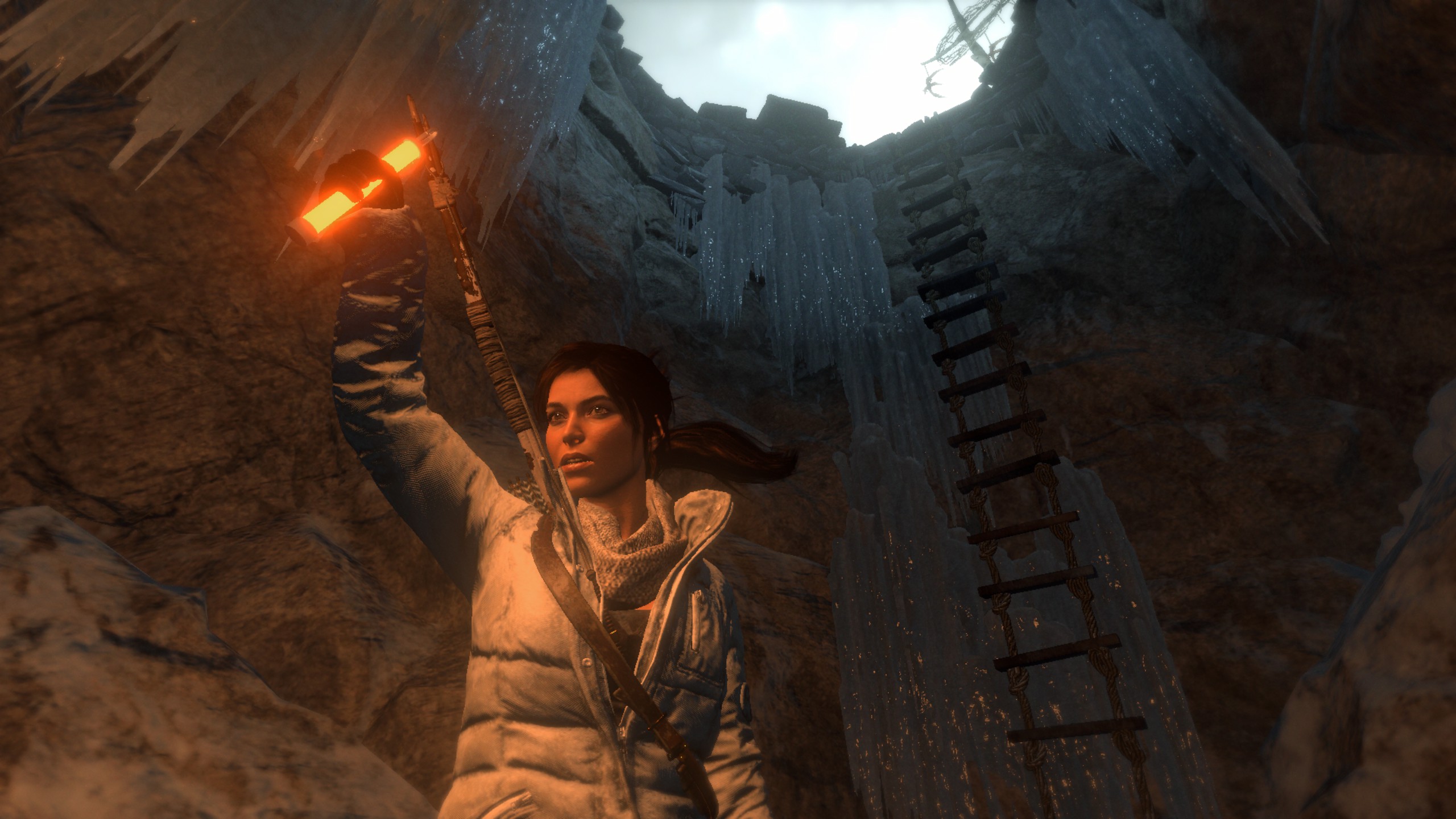 Still love the actual Tomb Raiding, but the Crypts are underwhelming. Where Challenge Tombs require some thought & physics manipulation, the Crypts are just stumbling around in the dark until you find the coffin. 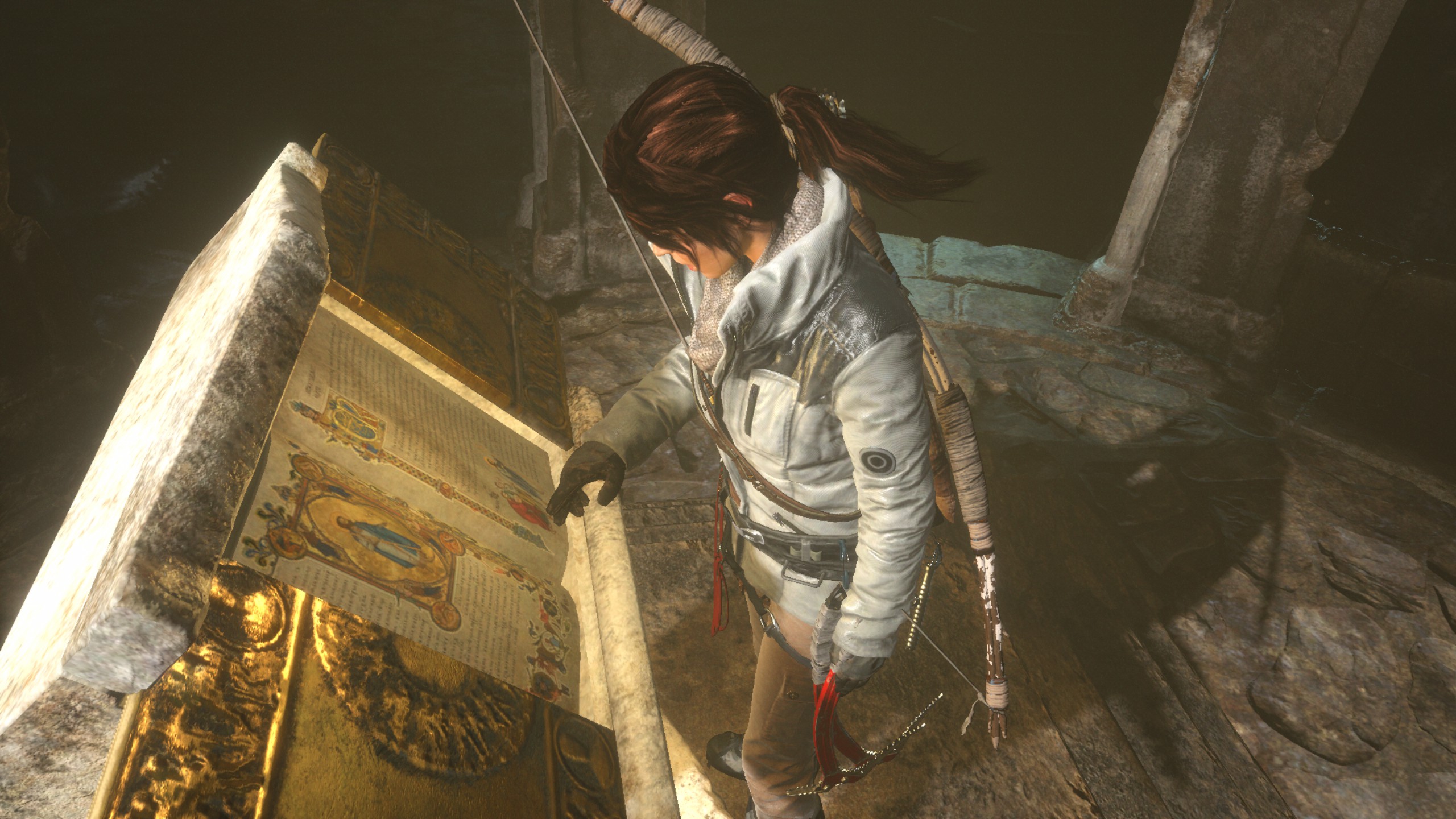 The skill upgrade system has quite a bit of variety & I like that you can slowly build a Lara for the style of play you want. Currently going for a brawler/assassin with some survival skills. I am still having serious issues with the combat - either I’m not quite on the same wavelength as the game or the low level of my system is causing lag during battles. Especially when faced with “boss” type enemies that charge you. I managed to do something right however and take out Colonel PussPuss despite him thinking I was more addictive than salmon rubbed in catnip. 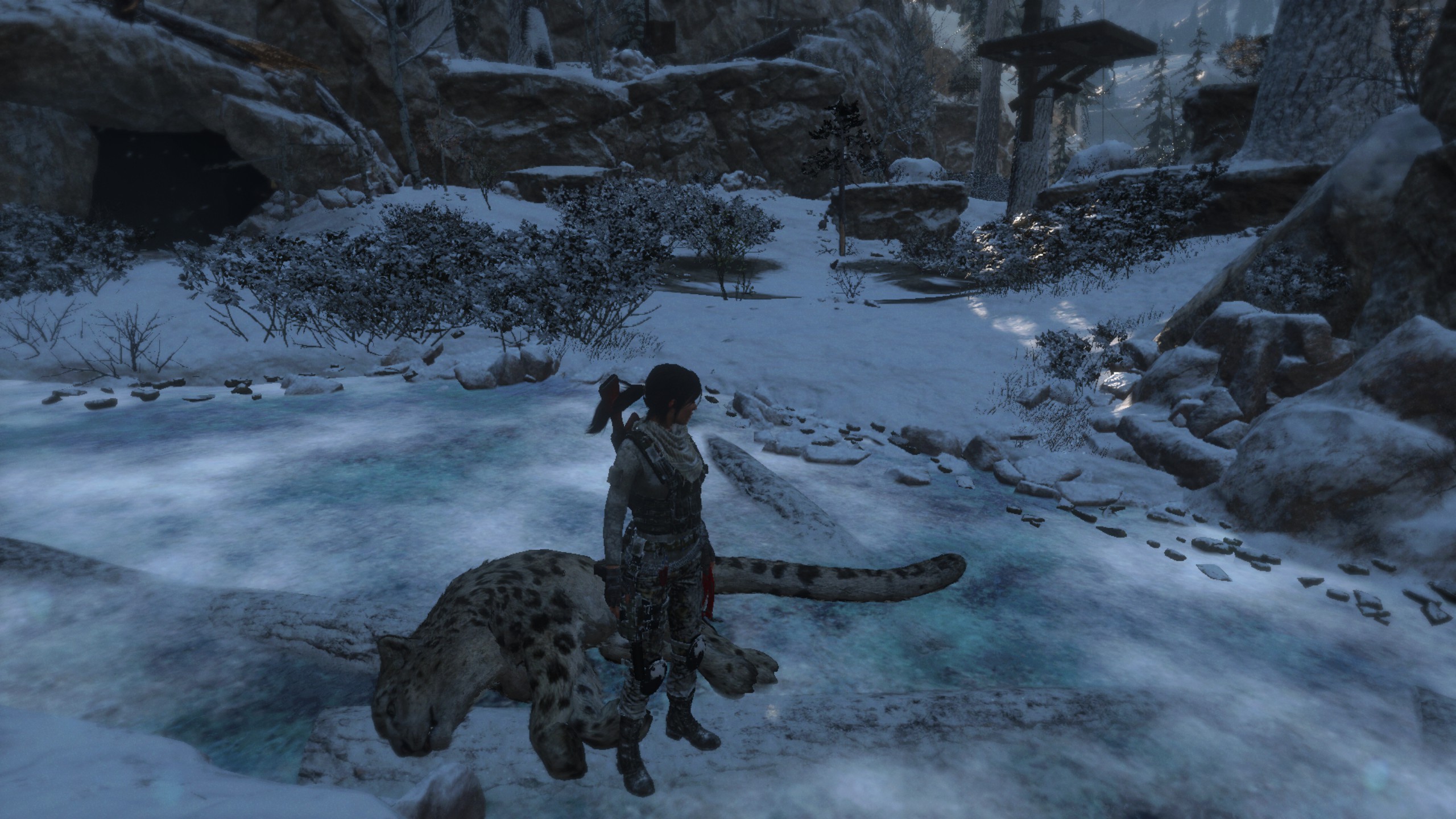 So onward to more exciting adventures… see you for the next installment of Lara’s Siberian Adventure of Doom. Otherwise known as “Only You Can Help Us, Because… Reasons” 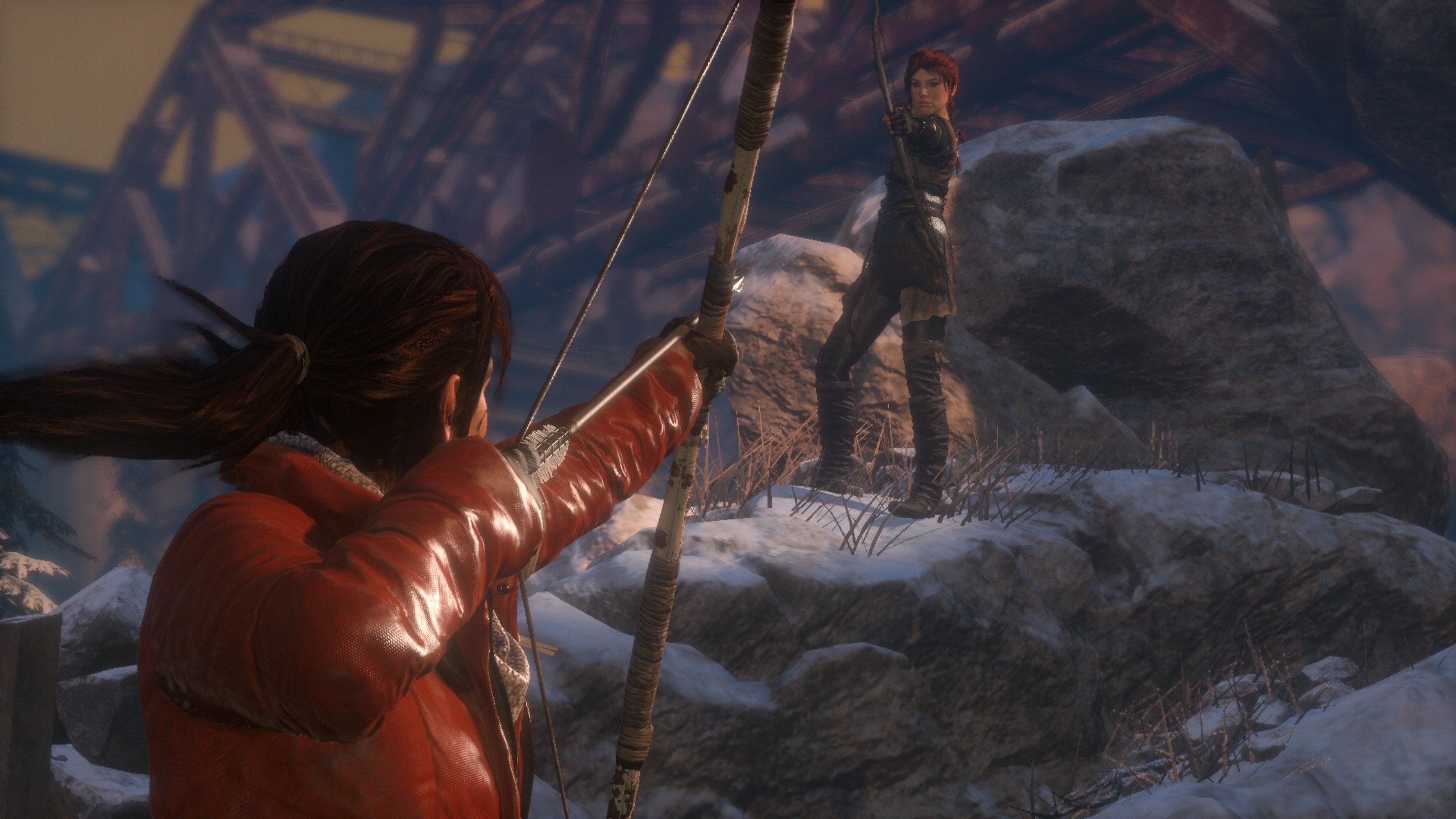 OK something happened - I think I just had that moment in a game when it just “clicks”.

After writing that last post up I went & played another 4 hours. This allowed me to complete the Soviet Installation level - apart from having to go back to complete the challenges. I really liked the navigation through the old Uranium mine facility, and the battles fought to get through it. I’m now into the tunnels and again there’s some bottlenecks that have been challenging, but in a rewarding way. It was rage inducing, but only because I knew that I should be doing better. So the control scheme is growing on me, still refusing to use the Instinct vision & I’m playing with all aim assists off.

I think the writers have done much better to fill in the Soviet back history as opposed to the Byzantium/Mongol history, which comes across more primary (grade) school text book level.

So the original GPU (HIS HD7850) died and was replaced by a Gigabyte 8GB RX 480.
After the increase in graphical power…
OMG!

The game’s graphics have shifted from decent to gorgeous. 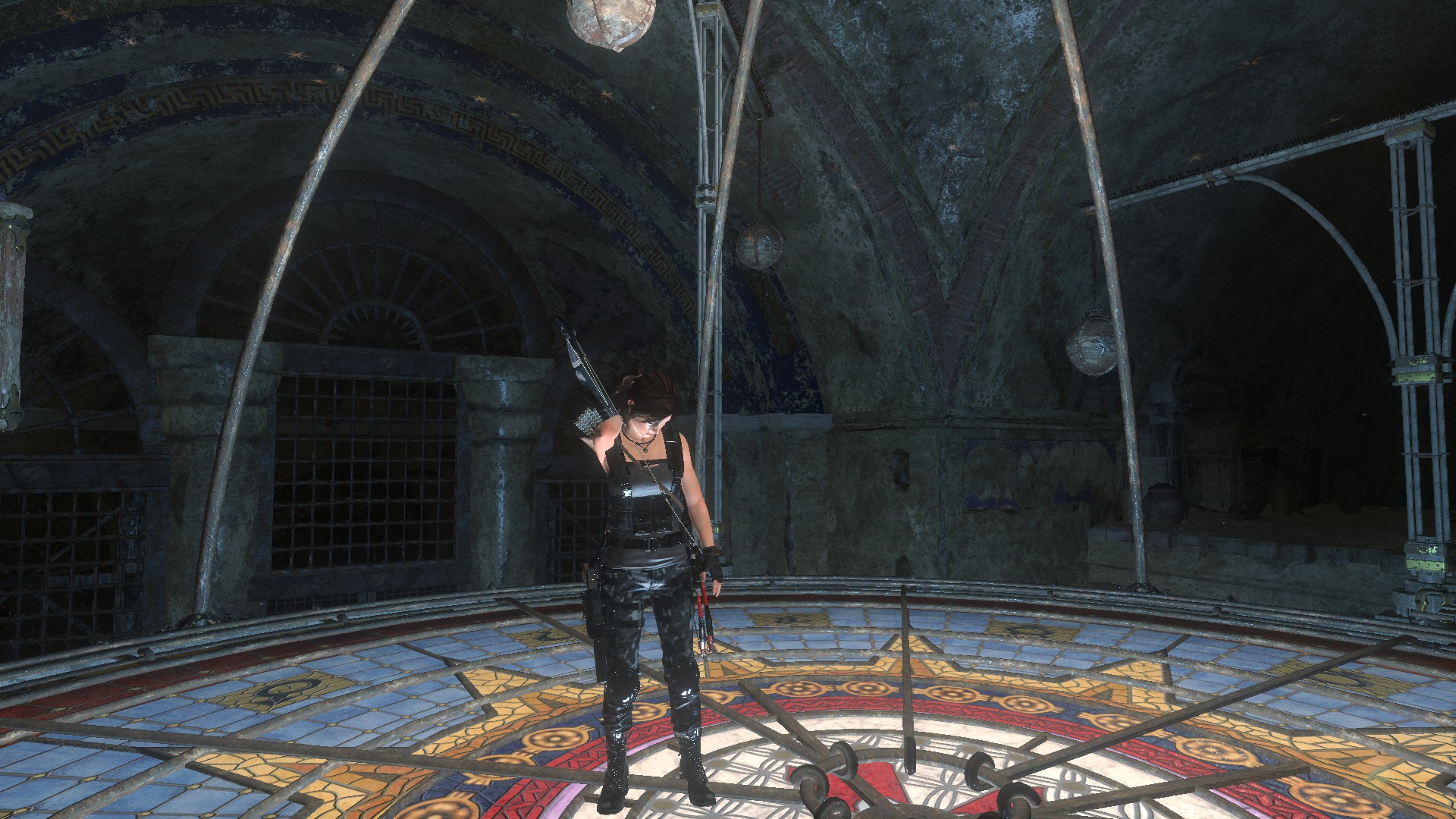 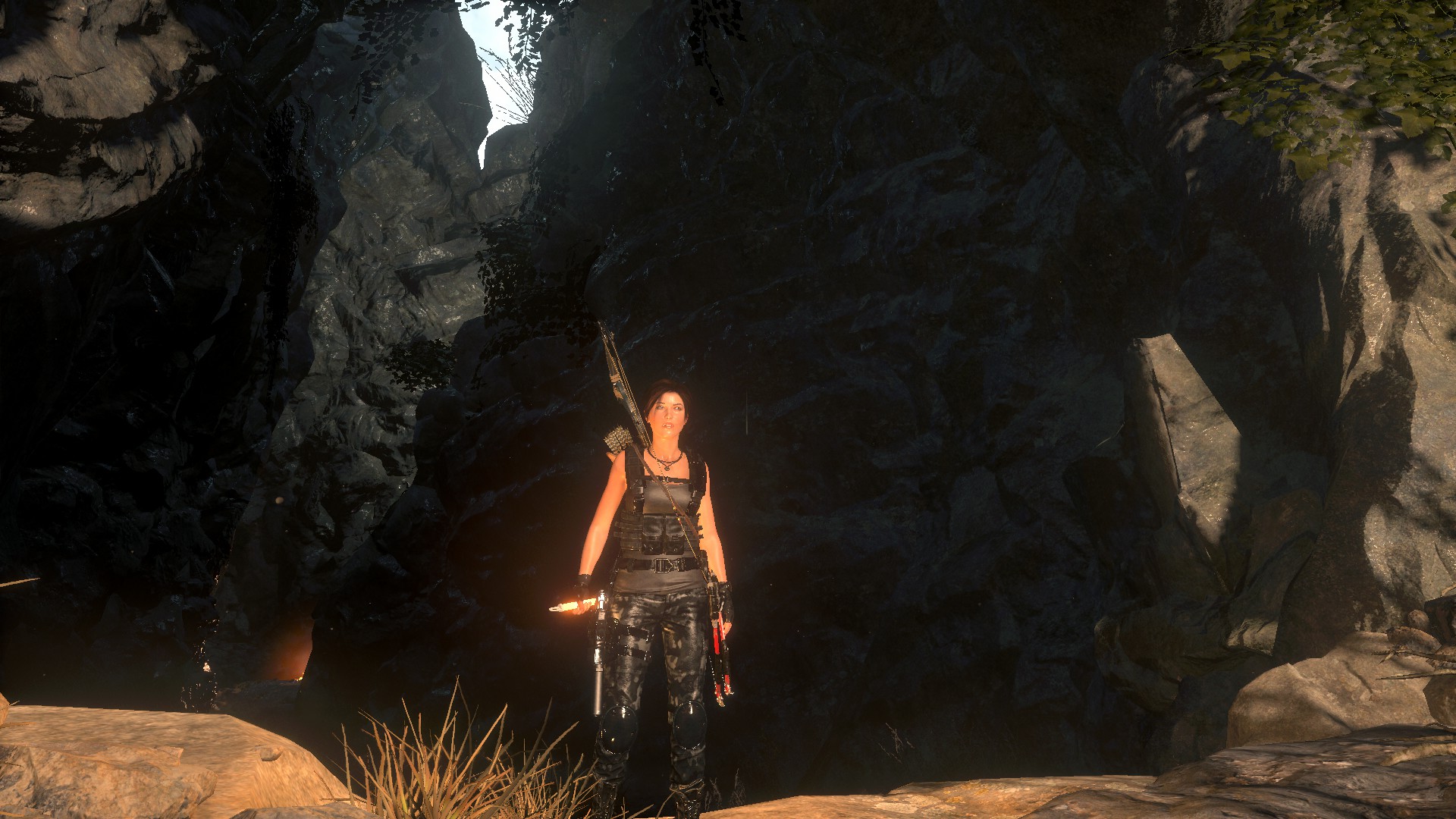 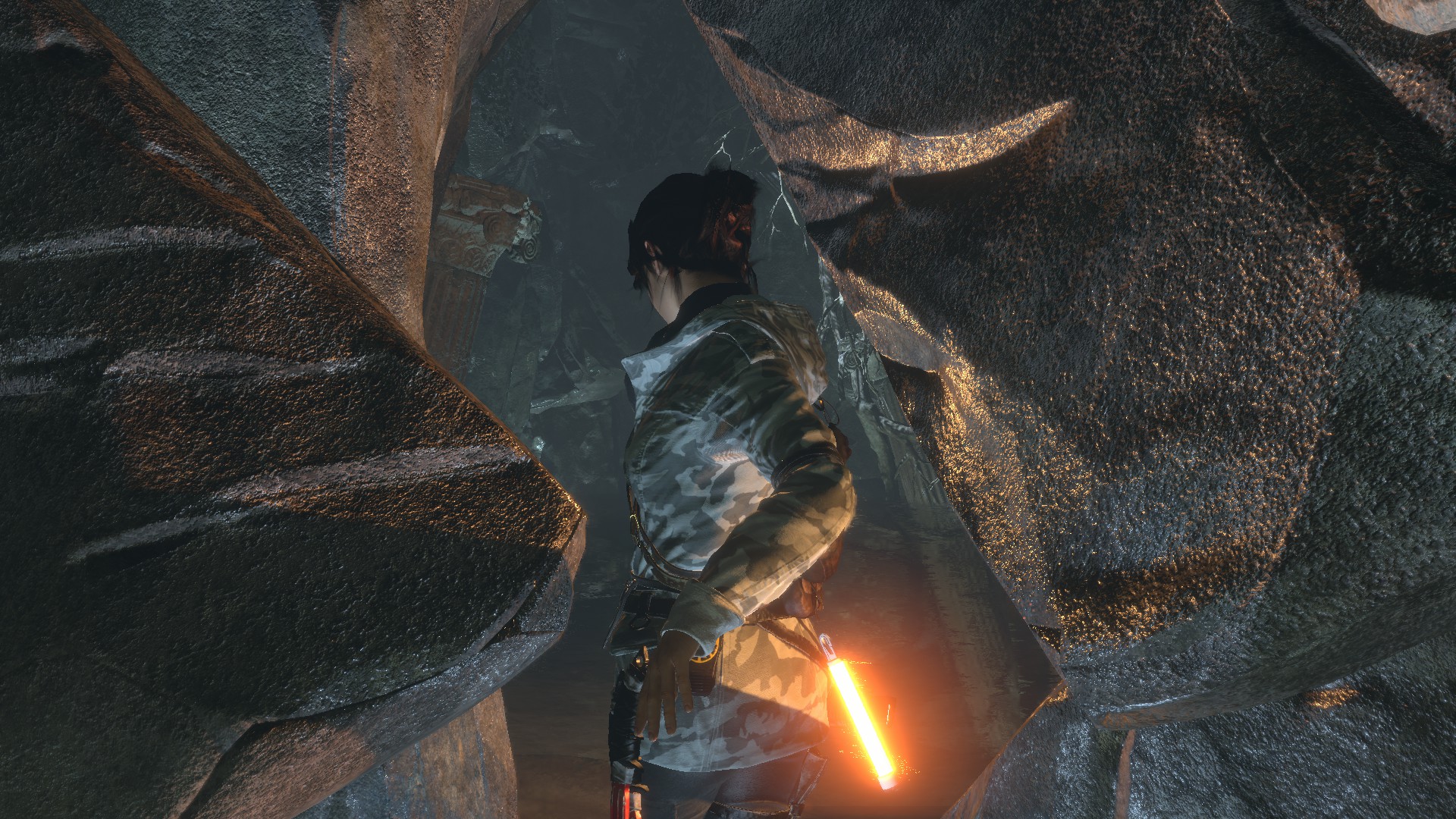 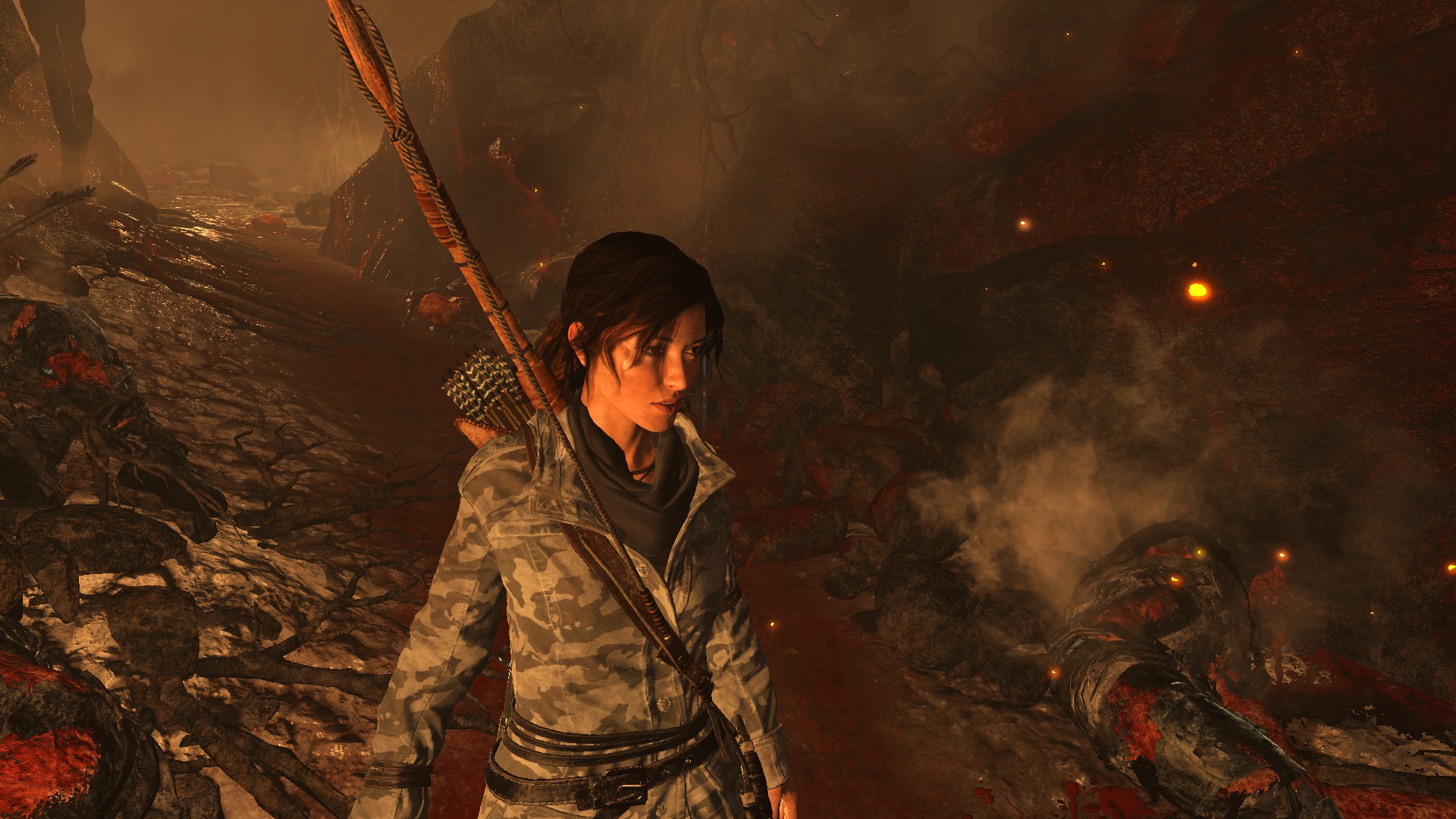 Want me to move this into the new review forum?

I like this format of a story over time for how things go with the game. It is a cool way to get an idea of how the game plays out.

teh_g I’ll put together a proper review once I’ve finished my playthrough. This was more a chain of thought based on the experience - just to see how my opinions changed as the game progressed.

teh_g I didn’t really answer your question did I?

Up to you whether it should be inside that section of the forums, seeing as it won’t be a true review and fit the proposed format. If you believe it’s appropriate as a WIP style of post I’m happy to put it wherever you think it suits.

Sgt_T8ie said in T8ie's Rise of The Tomb Raider playthrough:

teh_g I didn’t really answer your question did I?

Up to you whether it should be inside that section of the forums, seeing as it won’t be a true review and fit the proposed format. If you believe it’s appropriate as a WIP style of post I’m happy to put it wherever you think it suits.

Whatever works for you man. Let me know when you want me to move it

teh_g Go ahead move it!

Since my last update I’ve actually pushed on a bit further. There’s been a combination of fun & frustration.

I dislike the way that a Tomb on a map is locked until you get a piece of gear from a further part in the story. It’s frustrating because once you’ve moved on in the story, to a new map, it breaks the flow of the game to go back to explore the Tomb. Why in the scope of the story would Lara go back & waste time now. With the early maps the exploration fits, but once the stakes are raised & the pacing increases it doesn’t gel to take the time out to find & defeat the Tomb. All of this is exacerbated by the rewards from Tombs, being an enhanced skill set, which is of benefit to completing the game. So effectively the game wants to reward you for ignoring the plight of the entire world. Also the way that some of the gear is unlocked is a bit WTF… more a function of luck than anything else.

There’s some great problem solving outside of the Tomb Challenges finally, I’m loving the physics puzzles and wish they’d used more of them as opposed to the platforming ones. But it’s definitely a good thing to have more Tomb Raiding outside the optional areas.

The Challenges within the maps are fun & I can see myself coming back to them for completion later, after the story is complete. I find them being closed off due to equipment unlocks is forgivable as they don’t provide anything except completionist bragging rights.

I think I’m onto the home straight… it feels that way, but we’ll see if there’s a twist in the tale.

And… I’m done! I found the setting a couple of days ago to remove the majority of the survival instincts help - I now just use it to highlight way points as I get myself turned about in some maps so easily.

So many epilogues… I guess we now wait for the next one. Remember all of this is effectively the build up to Lara being the Tomb Raider. She’s not a world renowned archeologist yet. 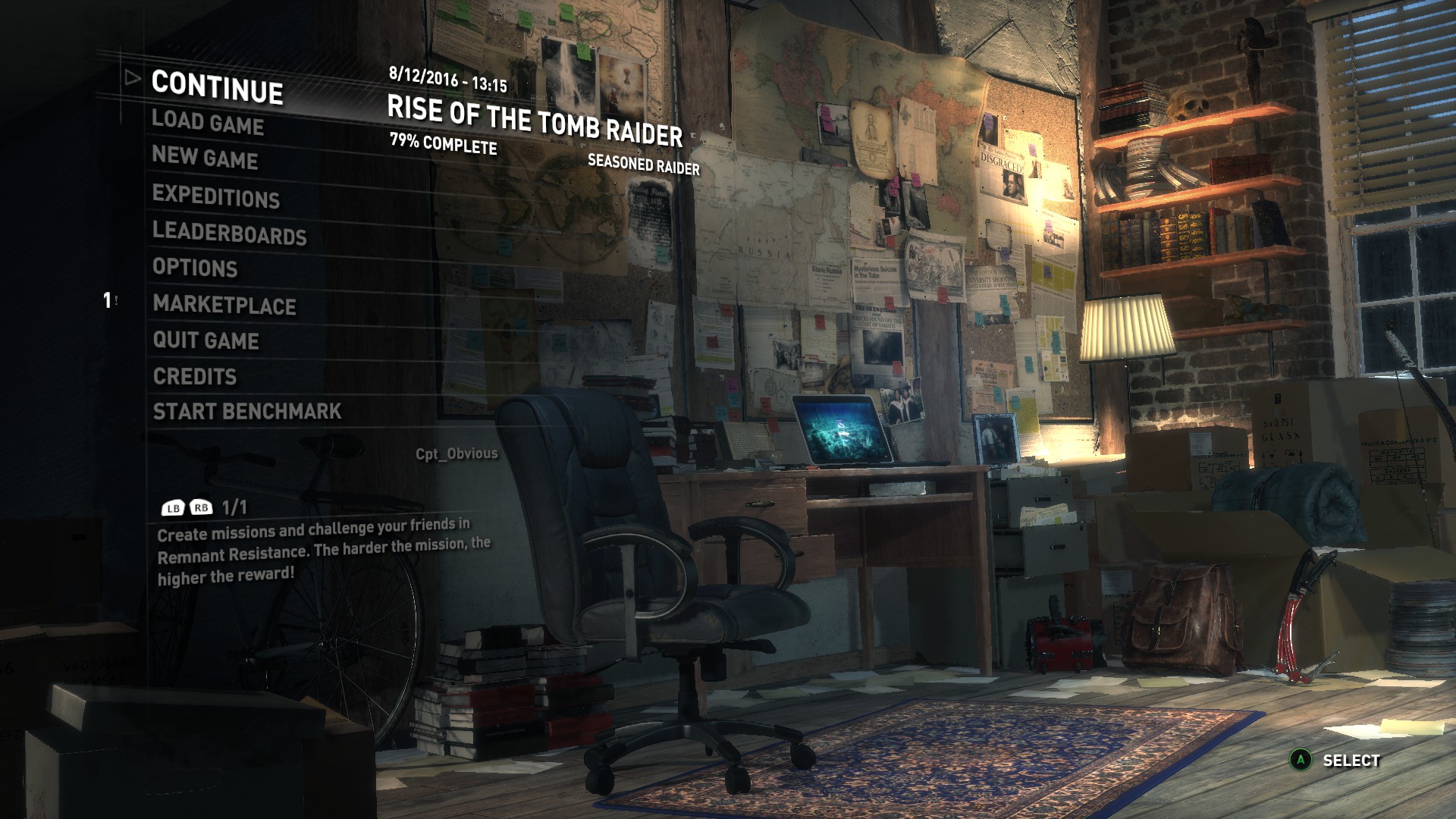 I have one more tomb to complete & then I’ll call it quits… maybe to return in the future to complete more of the challenges. 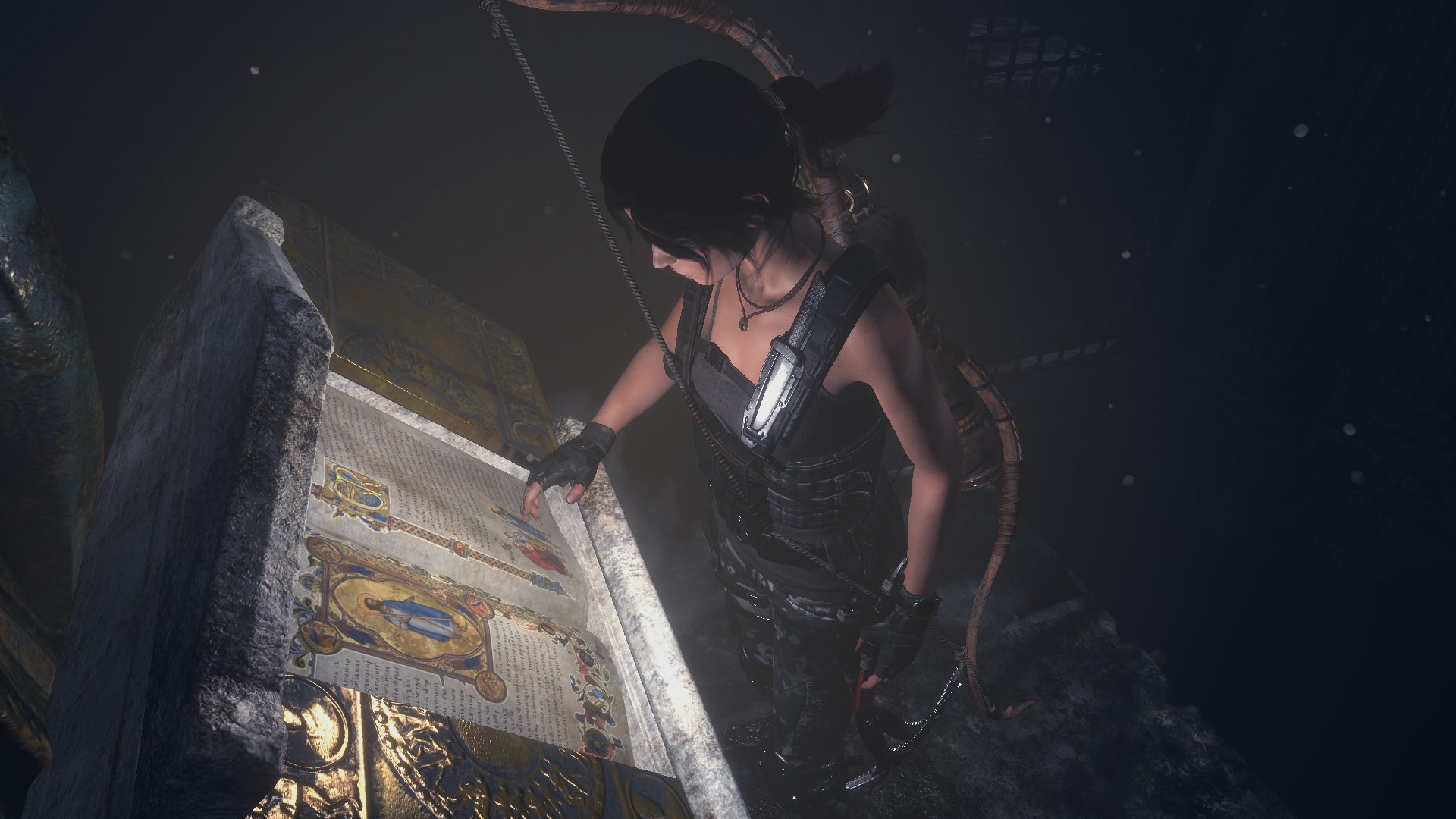 I have to say the game definitely won me over from my initial day one impressions. There’s still an element of disappointment, but overall this is a great game. It does some things better than the first, but has some issues that I don’t remember from the first.

I’ll be doing a proper write up/review of the game that collates all of my feelings from this playthrough! 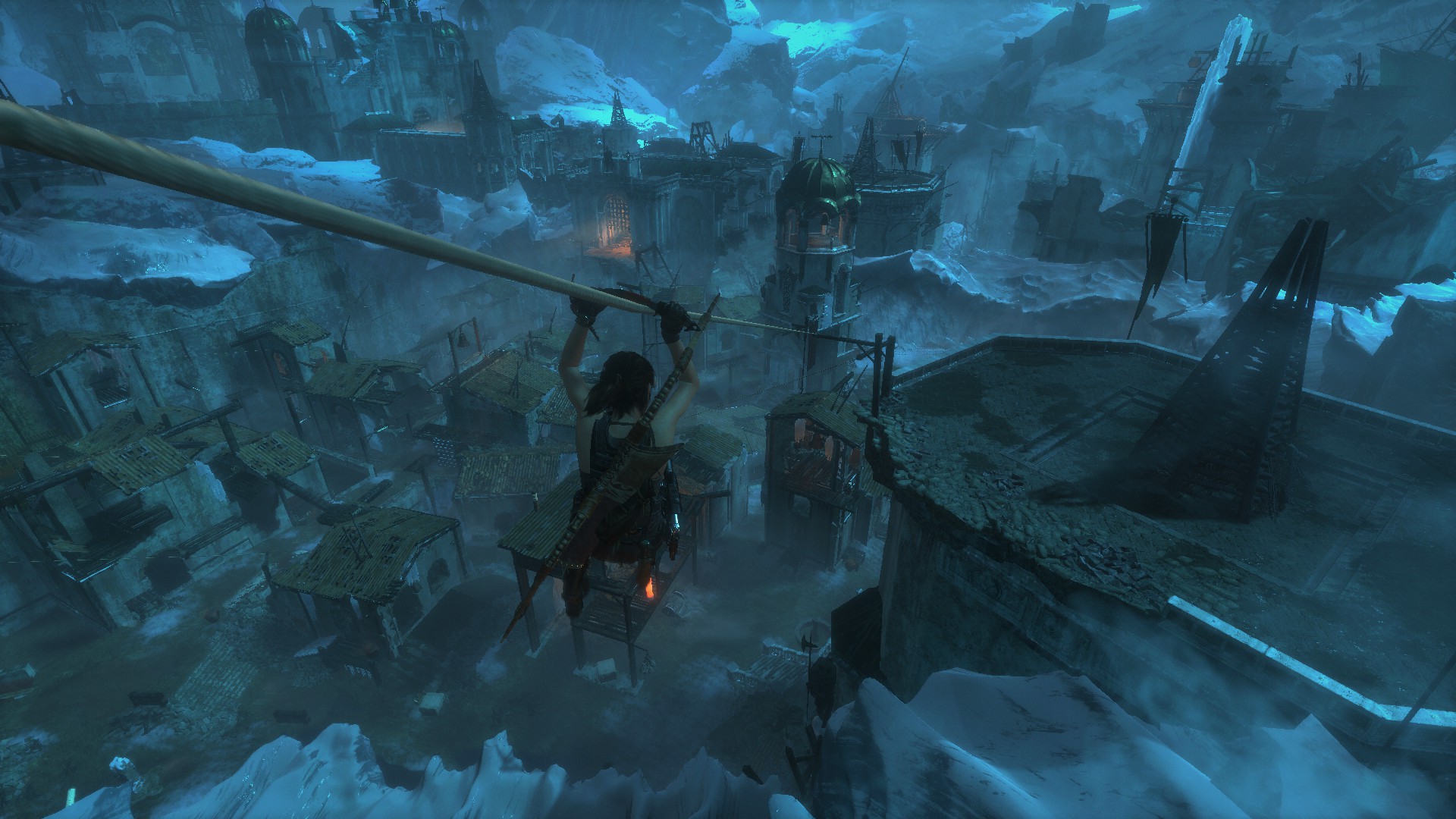