To anyone who hasn’t played yet, this game is only 40 canadian rupees until november 6! 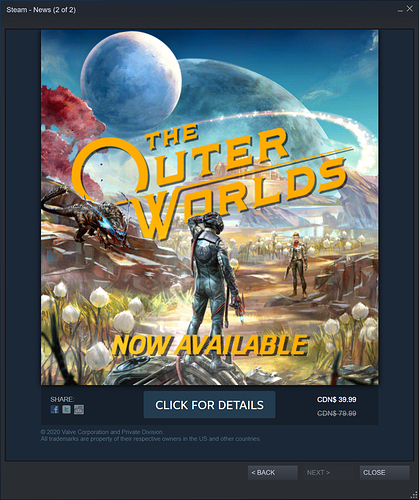 Very recommended. Played it with game pass, but i am sure i will pick it up on Steam (especially since i unsubbed from game pass) because i loved the game and there is a new story dlc.

One of the few games I’ve abandoned. I do feel bad for doing that.

Great game. I bought it on epic game store like a sucker though.

This game is fucking good! It’s the fucking fallout we all ACTUALLY asked for! Also well optimized. Running at max settings at 2160p>60.

I guess I’m the only one who doesn’t like it. Then again, Fallout isn’t my thing either.

And now imagine that Obsidian and Bethesda are both under Microsoft

Fuck bethesda they can go die in a corner by accidentally on purpose licking a power drill. Their sub studios are where the magic is.

I just suggested that Micro now owns Fallout licences and they have Obsidian in the house to make one without bethesda. of course it would be weird to compete with your own fallout like game.

I was just getting a bunch of crap out of my inventory because I was overweight and couldn’t run. I imagine 2.2% of players were too lol.

Then I might try it again. It was just so meh the first 5 hours.

Just beat the first dlc! This game is golden!

Just started the new dlc. More of the same, which is good but I do feel a bit foggy on the story. It’s been 5 months and however many games I beat since I played the base game plus first dlc.

I need to buy the full game and dlc of this I played the game it self on game pass and it was very good.

I beat the dlc yesterday morning. Pretty decent, murder mystery but not boring like games that are solely a murder mystery. Recommended.