I finished this one few days ago on PS Vita. Pretty damn good Uncharted game considering Bend Studio developed it and not Naughty Dog. It’s Uncharted, there’s no need for me to say more than that. If you played any of the 5 Uncharted games on PS3/4 and liked it, you’ll like this one too. The only flaw is that the game is a PS Vita exclusive. Other than that, highly recommended. I’m cleaning up the trophies which are pretty fun to do.

Dunno, it felt like any other Uncharted game to me. Nathan is there, cheesy jokes are there, gunplay, climbing, flirting are there…Sully is there.

That’s true. U4 is by far the best one. Maybe U2 is close second. Haven’t played Lost Legacy yet so can’t say how good that one is.

On par with Golden Abyss but prettier

I don’t see how you guys can remember which is which 6 months after beating one of them. I played them all and couldn’t tell you which was which. Or most plot points.

The effects of drugs and alcohol, I suppose?

Maybe, but more likely going through so many games a year. That and I rarely play a game twice.

Uncharted 2 is my only platinum trophy. It’s the best uncharted game.

Hmm, seems like I need to step up my game and earn platinum on all of them. 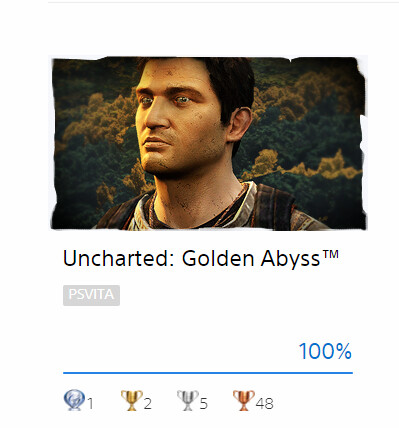 One done. Million to go

Same order for me. 2 was such a giant leap up from 1 it will forever be that special Uncharted game for me. That said 4 was pretty incredible too. I really hope they come back to the series someday.

I want a new uncharted too but with the current naughty dog, I kinda wish they stop making any games with the dickmann on helm.

He is the worst. Ruined TLOU