Went to an NVidia Community Event

Thought I’d just write up an overview of what I went to last night, where myself & Trainsmash went along to an event organised by the NVidia NFan community for NZ & Australia. They’re doing a bunch of these to line up with their Pascal (GTX 10-series) cards & in fact the first of them (in Melbourne) was the reveal of the GTX 1060. The evnt we went to was in Auckland - our home town & was held inside Playtech a local PC builder/sales store. They are a enthusiast retailer, catering more for gaming, high end HTPC, VR & decent peripherals rather than your run of the mill retailer.

So the point of the night was to get more people onto the NVidia ANZ Forum - to try & get a community atmosphere going & to introduce those that had never been to one before to the type of community they’re trying to build in Australia & NZ. I actually went to their first NZ event, about this time last year, which was to launch the Forum.

The night gave the opportunity to experience a multitude of things - while being interrupted by the requisite corporate speeches & culminated in a set of giveaways. There were various games, MS Office & some nice PC peripherals/ parts (HyperX Cloud 2 headset & 16GB G.Skill Trident DDR4 set in particular), but unfortunately no cards on the night.

Playtech had a bunch of there demo PCs up & running pushing the NVidia hardware & associated games - in particular a SLi 1080 Rig for a Project Cars VR simulation. But there were also a set of 4 Predator Lappies running Rocket League, Mirror’s Edge: Catalyst, Far Cry Primal (in 3 screen surround), Doom, Witcher 3, Rise of the Tomb Raider & Street FighterV on projector.

So what did we get to experience? In particular 2 major applications: VR & Ansel

For VR they had the before mentioned Project Cars (running a V8 Falcon around Bathurst/Mt Panorama - it’s a down-under thing) which I managed to get into & try as well as the NVidia Fun House, which I didn’t experience. From my first experience of VR I can safely say that it’s not even close to being something for me consider. My eyesight was so bad that I couldn’t get the headset in focus with my specs off, but with them on it worked fine… it’s just that they get uncomfortable & steamy, OK for a 5minute session, but I’d never be able to keep them on for an extended period of gameplay. The immersion was there & it’s quite exciting but overall I found the whole experience underwhelming, trainsmash described it as similar to playing on a 21" screen. The picture was there, but seemed a bit distant & small. Experiencing head tracking was intriguing, with the centre of vision being the only thing that stays in focus, so you can’t use peripheral vision or “flick” your eyes as you would normally to pick up cues. Instead your entire head must move to check things like your mirrors or surroundings. So VR will remain something I’ll keep investigating, but definitely won’t be a purchase until it’s less bulky & better suited to those with less than perfect vision. 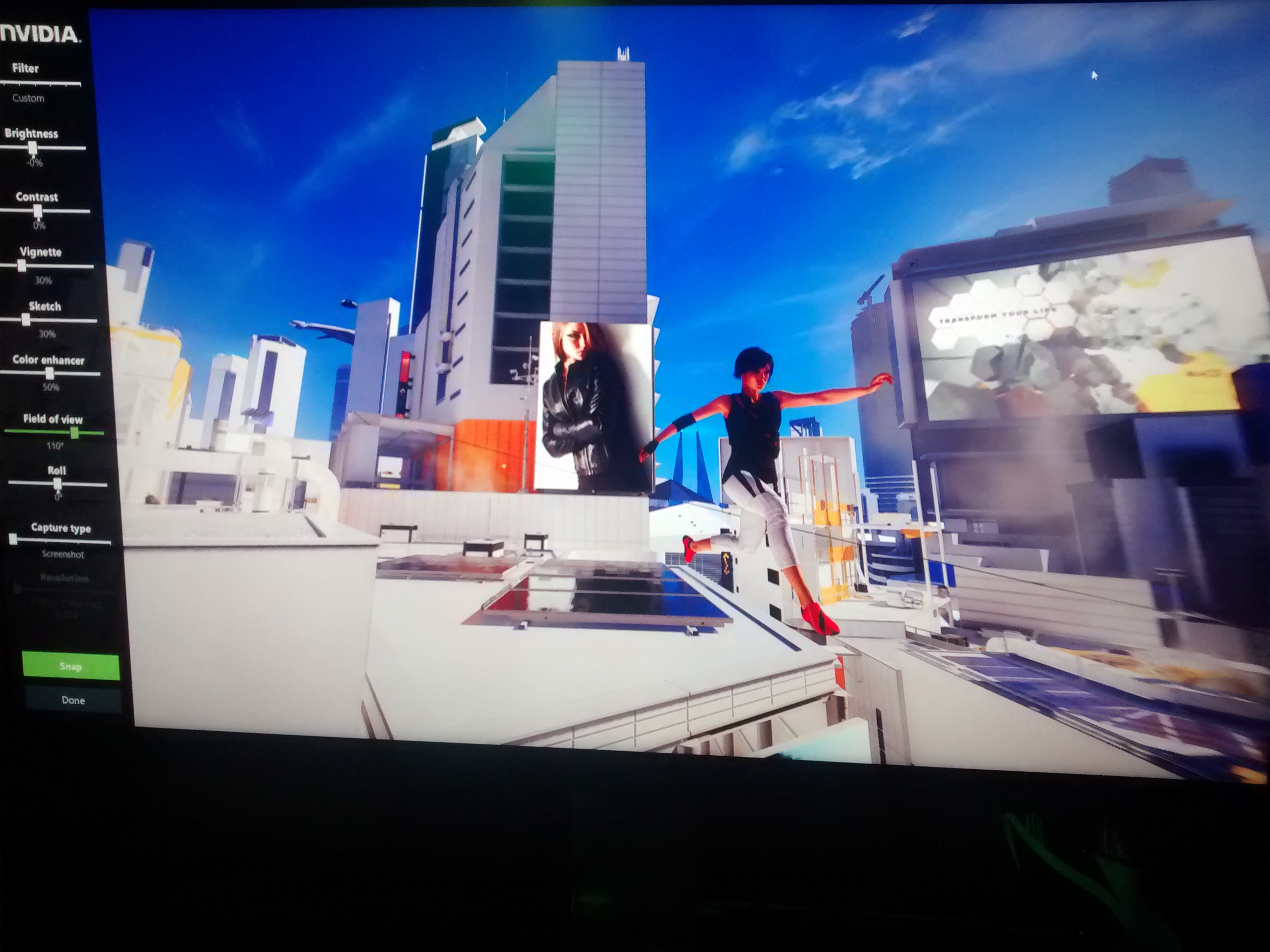 Ever since this was announced I’ve been excited for this, but as more & more information has come to light my enthusiasm has waned. Particularly the fact that this is a developer dependent implementation as opposed to a hardware dependent application. The initial announcements for Ansel never made this clear & added to my distrust to tech company announcements. If you don’t know Ansel is a screenshot application that allows you to pause the in game action & control a camera to set up remarkably dynamic screenshots. But from what I got to see & experiment with last night it goes well beyond the simple PrtScrn applications we’re used to. There’s some post processing applications built in, the ability to change camera roll, zoom in & out to ridiculous levels and that the file can be exported in EXR format for further Photoshop/editing enhancements. But the real kicker was being able to increase the resolution of screenshots up to 32x your display resolution (with a touted maximum of 1024K!) as an example of this the marketing described a Witcher 3 banner 32’ x 8’ printed from the Ansel application in, I don’t what you’d describe it SUMQXWTF-HD? The upshot of this is allowing capture of minute features during the screenshot without the loss of definition. Additionally the screenshots can be done in normal 2D or stereo for 3D glasses/screens or stereo-360 for VR headsets & 2D 360 for use inside a mobile device to pan around your screenshot on an tablet or phone. This is all very good, but gain it all comes down to whether or not game developers will put the code into their games, at this stage Mirror’s Edge Catalyst is the only current game with it implemented, but it will soon come to The Division, Witcher 3, No Man’s Sky and some others I don’t care about

All I can think about is taking these awesome screenshots & printing them out on Canvas or banner format for the mancave or kids’ room!

So that was my run down over the tech’s showcased last night - though there were also some insanely nice display PCs like a Corsair Bulldog set up with a 1080 installed & a Thermaltake X1 Cube. the remainder of the PCs were fitted in Silverstone Raven RVZ02B’s. 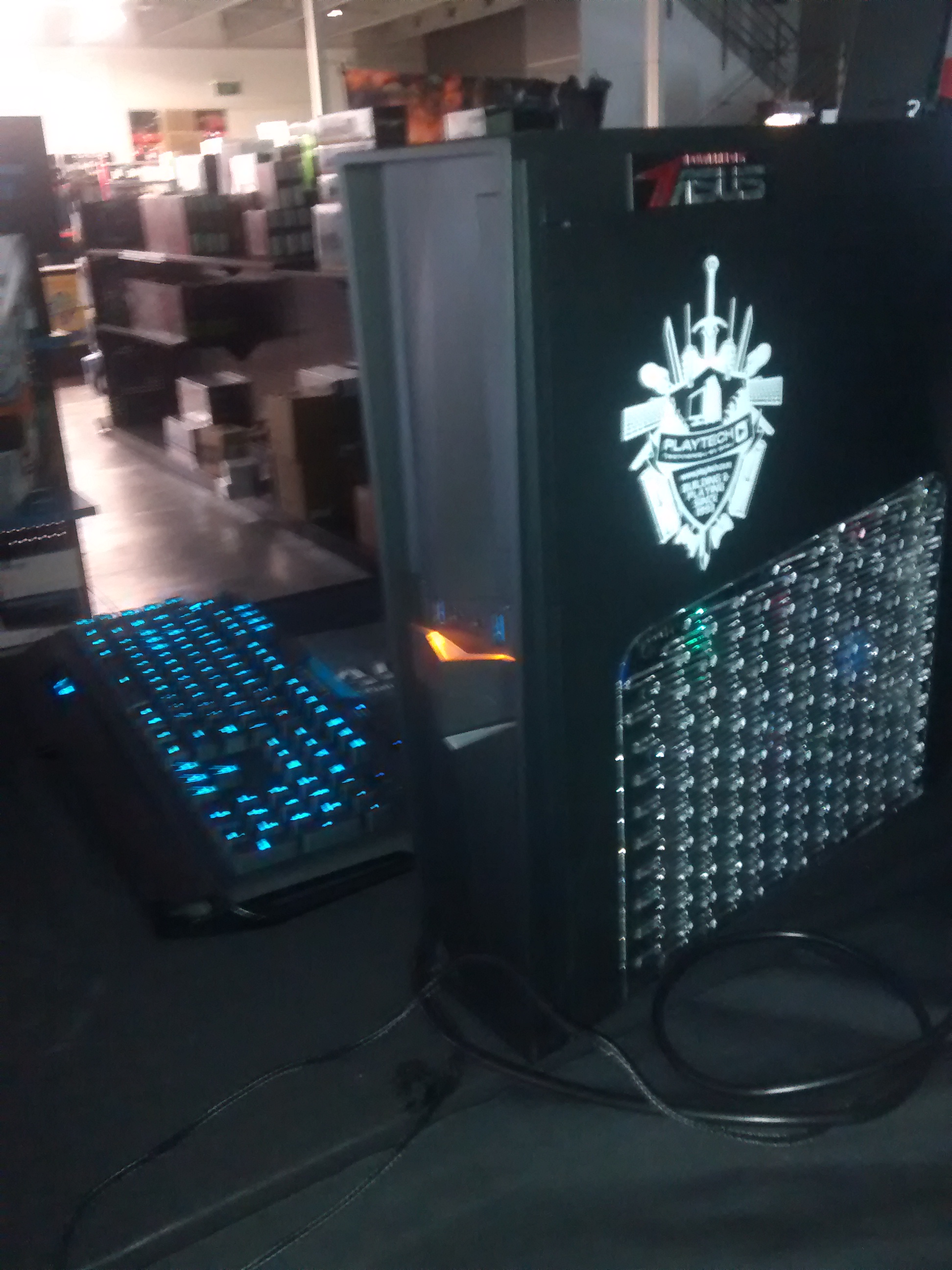 Hey I don’t want to get off subject, but your talking about Ansel cued me to tell you this-

Since I know you are getting ready to do a Skyrim build, make sure to check out Screenshot Assist.
http://www.nexusmods.com/skyrim/mods/33521/?

It pretty much does for Skyrim part of what you are describing that Ansel does. I can hit the rght-ctrl key, and it pauses my game, gets rid of all the menus, and gives me free control over the camera. very handy!

I remember when playing Black Desert, they had an awesome screenshot control like that, where you could apply all kinds of filters and stuff to your shot.

Ok, carry on, back to the regularly scheduled Nfan review!

Polekatt said in Went to an NVidia Community Event:

Hey I don’t want to get off subject, but your talking about Ansel cued me to tell you this-

Since I know you are getting ready to do a Skyrim build, make sure to check out Screenshot Assist.
http://www.nexusmods.com/skyrim/mods/33521/?

It pretty much does for Skyrim part of what you are describing that Ansel does. I can hit the rght-ctrl key, and it pauses my game, gets rid of all the menus, and gives me free control over the camera. very handy!

I remember when playing Black Desert, they had an awesome screenshot control like that, where you could apply all kinds of filters and stuff to your shot.

Ok, carry on, back to the regularly scheduled Nfan review!

Oh, I didn’t know about that mod. I’ll definitely have to do that. I’ve only used the console commands previously.

This is an awesome writeup. I am jealous you got to go to this.

It was a good night for us Sgt_T8ie. I love team green, however it is not an exclusive relationship at the moment. Was never keen on VR, however it was a good experience. My take on a racing game with VR:
It was like gaming on a small monitor and when you try to focus on the apex of the corner, everything blurs and you lose your next “flow” point. I countered this by keeping my head in a fixed point and moving my eyes to a blurry apex. It was very immersive, however not ideal for racing sims in my opinion. The G29 wheel was a work of art and anyone willing to donate one to a good home is welcome to do so (I will give a good home & treat it like I treat my dog - Like my child). The wheel feedback stimulus coupled with the VR headset immersion was surprisingly brilliant. Overall I was impressed, but not enough to fork out that kind of cash required from my current hardware starting point. P.S. it took 3mins after for my motion sickness to set in & I believe it was due to the keeping my head still and moving my eyes about.