So what remaster would like to see? console, pc, com64 games? Complete remaster or just some hd textures and win10 compatibility? 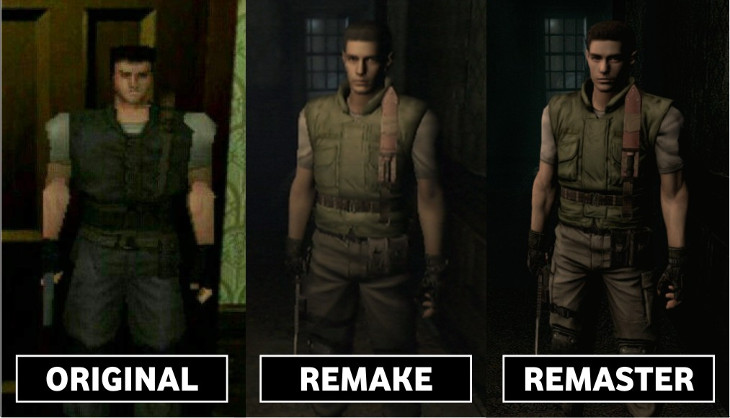 I’d like to see anything Metal Gear remake actually. Hogs of War remaster would be freaking nice. And of course Demon Souls. Any F.E.A.R. game too. And these Harry Potter games from PS1 would be awesome to see again in a remaster.

I prefer full on remakes like Resident Evil 2 compared to remasters. Most old games are dated when you play them and could use more than just a graphical update. I want more RE games haha. All of themmmmmm! I even want that Wii rails shooter they made as a VR remake. A reboot of Ninja Gaiden would be good. God of War 1-3 remade in the style of the new God of War would be cool. I’d also be OK with new games/ideas though.

I’m basically gonna buy whatever FROM Software farts out. I’m a sad person.

I kinda want Indiana Jones and the Emperor’s Tomb. I love that game.

And they don’t have to change a thing, in gameplay, changing it would ruin the fun. Just make it work seamlessly with today’s systems and internet.

Ocarina of Time. The video someone posted of showing what it would look like with Unreal 4 engine was gorgeous… a boy can dream

Super Mario 64 remastered with some modern controls would be nice.

And here I am, hoping they’ll show some love for Wario Land (literally anything from the gameboy era) or Yoshi’s Island.

Yeah Google it. They’re pretty committed which is great. I missed Galaxy and Sunshine

That’s awesome Super Mario Galaxy was a blast. I also missed Sunshine so it will be cool to finally give that one a go.

I would love to see and buy the original The Battle for Middle Earth games. Or even do a reboot/remaster, but a strategy game in the lotr world is much needed.
I need an Imperium Galactica 2 remaster as well, runs horribly or not at all above windows xp.

Oh man, how could I forget. Give me The Curse of Monkey Island!

I just started this game a day ago, am i lucky or what

But this awesome tactical shooter needs a remaster as well, remapping the controls does not work, default action buttons does not work, 1920x1080 resolution does not exist and it looks like shit but still loving it.
Who played the game? Brothers in Arms is being adapted into a TV show - VG247

Gearbox Software is turning its World War II shooter series Brothers in Arms into a TV show.The new series will be adapted with the help of executive producer and showrunner Scott Rosenbaum, whose resume boasts shows including V and Queen of the...

I did. I liked it way more than medal of honor and cod. Too bad it’s just forgotten.

I’m drunk in discord with friends. One of them is trying to find this obscure game he played on the gamecube. That somehow led to talking about Simpsons hit and run. I would love for that to be remade. Also Seeing brother in arms above! OMG I wish that gets remade as well.

Hell’s Highway was phenomenal. I beat it again on Steam 2 or 3 years ago.