This is my next game! It’s another Yakuza game so I don’t think I need to explain anything at this point.

I got it on ps4 because there’s no mention of it coming to pc at this time. Also there’s no ps4 pro options. All they did was bump it to 1080p60. So don’t play on a 4k display or it’ll just look blurry. Don’t play on a 1080p display if you have supersampling enabled or it will look worse than stretching it to 4k. 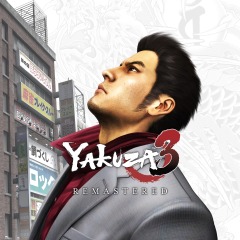 As part of The Yakuza Remastered Collection, Yakuza 3 comes to the PS4™ for the first time with restored content in 1080p and 60fps. In a quest to abandon their bloody past, Kazuma Kiryu and adoptive daughter Haruka Sawamura leave the unforgiving...

I’m definitely liking the game, but I wish instead of just doing a res and fps bump to 3, 4, and 5 that they just made kiwami 3, 4, 5. Would have been a far superior experience. These games as they are don’t age as well as they should.

I’m just happy we got them to play without buying a ps3. But you’re right.

Just beat it. Yet again another excellent game! Major caviates though. If you haven’t played all the prequals (Yakuza 0, Kiwami 1 [or original 1], and Kiwami 2 [or original 2]) you will not like this game in any way shape or form. This is due to them only bumping the res and fps and changing nothing else. So you’re existing familiarity with the franchise is all that will allow you to enjoy and understand what’s happening and know what to do. There are no quality of life features. As such I got through it in ~30hrs. Had there been an actually useful map that actually had side shit on it, I would have taken longer and experienced more. It’s also very weird having all my usual komorocho restaurants not be accessible because the original 1 and 2 didn’t have them implemented, and apparently neither does 3.

Highly recommended, so long as you played all the prequals.

I think they just decided to spend all the cash on the new Yakuza game instead of changing something in their older games. I do appreciate Sega bringing anything Yakuza to current gen.

I’m actually sad that very few tried Yakuza games. On GX I don’t think anyone tried Yakuza except the two of us lol