Because we can still care about other people, right? Talk about charity here!

I give as much as I can on a regular basis throughout the year to our local Children’s Hospital.

While that in itself is a good thing and place to support, I have a personal reason behind it. When my youngest was born and came home she started to throw up after every time she ate, at first we thought it was just her. But after day 2, we realized that it was getting worse (more coming back up that normal) and my wife took her to the local hospital ER.

After 4 hours of sitting there, they finally said it could be this or it could be that, but it was probably just a cold and sent them home.

Next morning, my wife and I are still concerned so she took our daughter to a different hospital and after another 4 hours was told the same thing and sent home.

Now 4 days have passed and our wee one is not happy, and is seeming a bit off, so my wife calls the Nurses hotline, describes what is going on and the nurse tells us to get in the car, and drive to the Childrens Hospital NOW. We do so.

Upon arrival, we are greeted by name (turns out the nurse called ahead) and our daughter was on immediate iv fluids and in surgery within the hour.

She had something called pyloric stenosis which is an over developed sphincter muscle on the outlet of the stomach which usually affects 1st born boys, not often girls. This is something both ERs had mentioned but discounted. Anyhow, we were told that our daughter most likely would not have made another day if she did not get in when she did because of dehydration/starvation.

They saved her life along with that nurse on the phone, so I give as much as I can when I can all year every year since. I never want someone to go through losing a child so I try to help.

Ub6 I wish I could double upvote

No worries… this is not Redit… I will survive.

Well i always did some charity work or helped other. Donating PC parts when i have spare from work or spare money…Working for free helping on that way etc… I wish i could do more financially but im rekt in that way because of work etc… currently working to replace my family roof since it was really bad lol I also postponed my moving and some other things few times in my life due to all my monies going in different direction when it was needed

I know you aren’t real high on the sisters, but one of them posted just this morning the click to give post she does frequently.

Craig (from here) told her that Tribal hearts wasn’t around anymore so she didn’t have to worry about that, and she said she knew that, and was just trying to still raise awareness for the charity.

She promptly got told by the roman posting police that she was posting spam. 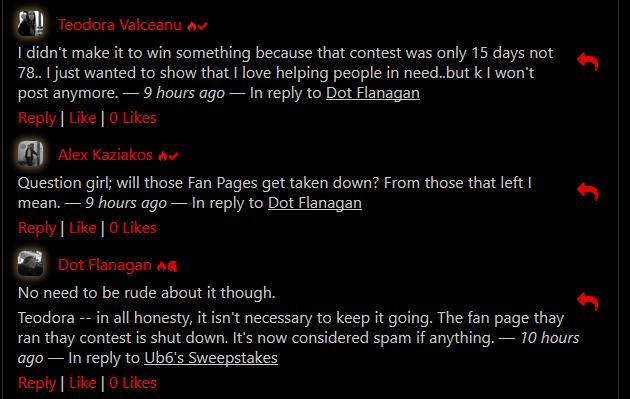 It may not be the same kind of charity others do, but I do free repairs on peoples pc’s and laptops when they ask software wise on laptops and hardware/software on PC’s. I don’t care if the OS goes back to Windows XP I can usally fix it with a little time and effort. I also try to give my loose change to the childrens foundation jars when I see them around when im out doing things at stores.

Zmajuga I’m the last person to speak up for Teodora Valceanu but this is simply sad. Why would anyone have a problem with clicktogive and go out of their way to remove the post is beyond me. Gaming Tribe is gasping it’s last breaths.

Dunja they are so hard on their no solicitation rule that they won’t even allow a charity opportunity that requires no money. Ridiculous

Dunja I tried to take up for her and support her on that. I think I said something to the effect of there are a lot more things are posted daily that I consider spam, other than click to give.

This just makes me want to randomly start posting click to give screen shots again!

Don’t think I won’t in a week or two! I’ll wait till no one expects it!

Polekatt Tbh if I hadn’t deleted my account I’d probably be spamming pictures of random household objects right now, like edge of the carpet or pattern on the curtains xD Dumb, unexpected spam is the best kind of spam

Most my charity donations are local. I work in Stoney Creek which is a city that has pretty much become a part of the city of Hamilton (Hamilton got so big it expanded all around Stoney Creek). Hamilton itself is a very divided city. It was built at the base of a mountain which it has since grown up the mountain as well. The upper part of the city is actually pretty nice but everything below the mountain is pretty much lower class.

The city also has a homeless people problem when you head downtown. The city itself actually has a lot of places for them to get a meal or spend the night (Pretty much necessary during the winter, Every now and then you hear of a homeless man freezing to death during the night). Usually i participate in charity hockey events for the homeless or schools in the downtown / east end of the city. I’m also a fan of twitch charity events there always fun.

MyLifeForAiur This world can use more people like you, I once spend 3 years homeless between shelters and soup kitchens after I turned 21 because I couldn’t seem to get a break in life after I moved to maine.

What I told her was she did not have to tag him anymore, not to stop clicking.

Polekatt said in Charity, yo:

I know you aren’t real high on the sisters, but one of them posted just this morning the click to give post she does frequently.

Craig (from here) told her that Tribal hearts wasn’t around anymore so she didn’t have to worry about that, and she said she knew that, and was just trying to still raise awareness for the charity.

She promptly got told by the roman posting police that she was posting spam.

Gorkie People donating to charity, 50 - 50 draws, hockey, food, and sometimes even beer. It’s really not much to praise me for I mean its fun! A win, win if you will. Three years homeless though I couldn’t even imagine. I’m by no means a wealthy person but I’m lucky to have loving parents who I know will help me if I ever need it.

grammar isn’t my strong suite, sorry if I worded it to sound bad on ya Craig.

Zmajuga
Hope you post it every day there xD
Dot considers it spam? I’ll show her spam! Going to post it also again on there xD

Polekatt no no, I never thought you meant that, but I was clarifying for my own brain… sometimes I can be like that, I may have mixed up this place with that place in my head… sorry if I made you feel icky.