The polish CD-Action magazine leaked out the RX480 benchmarks
(normal settings and very high settings)
What do you think? 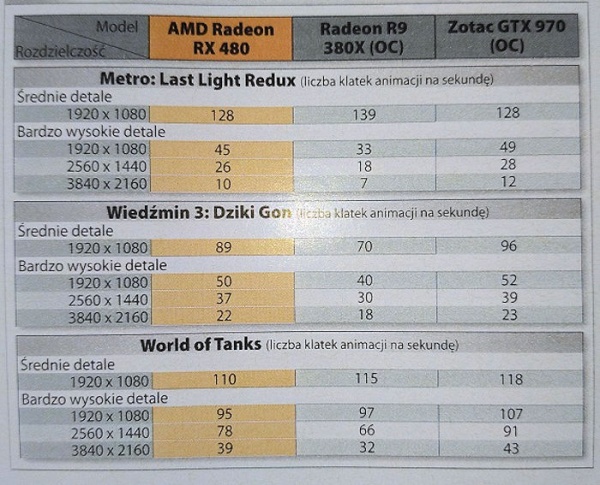 ButtStallion Not bad for performance to cost wise but it means my 290x is right with it or better. So don’t think I will be looking to get one any time soon.

Only0neKnight I have a GTX970, i dont want to change it for now as well, I follow the news because my friend really need to replace his old HD 4600 card

3gb vram and was pretty solid when I had it.

Still using my 7950. No complaints so far

MyLifeForAiur Its a great card for high setting 1080p gaming, no issues at all while I had it, just had offer to get 290x so went for it.

Only0neKnight Every now and then I start looking at new cards but usually after a couple of days I always tell myself that I’m still happy with what I got. I only have a 1080p monitor as it is and this card is doing a good job at staying in the high settings for the most part.

MyLifeForAiur Yup like I said I was very happy with it, just had a chance at an upgrade and took it

only reason I have the 290x

MyLifeForAiur yeah when I build my new pc next year I’ll probably save some money and just move my fury x over.

All games on the list use Ngreedia Gameworks so it’s expected.

Only0neKnight nice! I have this one in my second PC and it is excellent.

The one I’m building next year will hopefully be on the new platform for Zen.

ShiftySatchmo Having a hard time finding 990 chipset with the m.2 card slot though, that aint gonna kill my wallet.

Only0neKnight I feel like PCIe SSDs are kind of pricey and not very high capacity yet.

Only0neKnight haha just saw that! I always considered M.2 to be for laptops. Didn’t even know they made desktop mobos with M.2 support, but I definitely don’t know everything about hardware XD

ShiftySatchmo Building a new PC exciting. Just like upgrading my GPU I usually start looking at parts for a build then decide not to. I usually find myself telling people I’ll build a PC for them whenever they mention looking into getting a gaming rig. I love building them I just find myself wanting to build them way more often than I can afford to. XD