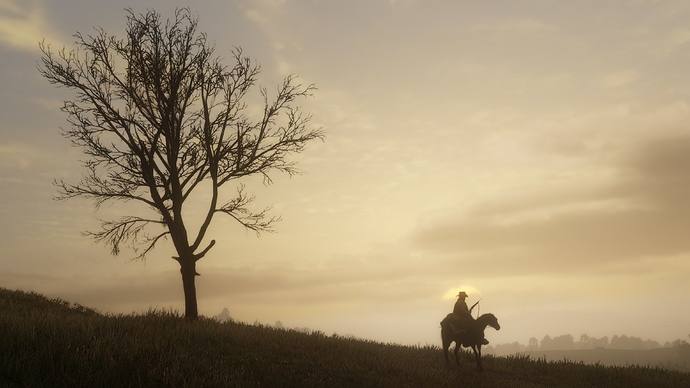 Its not Red Dead Redemption its actually Red Dead Depression. !!

its been eight days i finished this game and i still cant get over it. yah you guessed right i am 28 years old and i still cried over a game. go u can laugh. >_<

I barely do any kind of any game review. but figured i should share my experience with you guys cause you guys are the only close gamer buddies i have. and those who have consoles and havent started the game yet they should start the game too as soon as possible.

i was confused so much back then what is my most favorite game? but after finishing God of War 4 i could proudly say to anyone that my favorite game is GOW4. a game with great graphics, great story and amazing epic gameplay. but then i finished RDR 2 and everything changed. So let me start now why this game is so good and what are the flaws. though these are just my opinions so no hate please. :3

Till Chapter 2 its the prologue of the game. after you finished chapter 2 game will open up to you to do EVERYTHING. you gonna enjoy chapter 3 a lot cause finally you are doing everything in the west world that you ever dreamed of. by the end of chapter 3 and the whole chapter 4 seemed kinda boring to me cause tbh it feels like the whole thing was kinda dragging. also you have to travel a lot by your horse and after the first three chapter when you saw all the beauty of the game those travel will be boring at some point. (not always but it will) also sometimes the control seems kinda weird to me (maybe its just my issue) cause u have to press R2 then SQUARE to talk with an NPC. but if u forgot to press R2 and you pressed SQUARE instead of talking with the NPC you gonna choke the NPC to death :3

but…by the end of chapter 4 story turned into some kind of epic drama old school movie. following chapter 5, 6 and then the longest epilogue of my life. oh man i cant explain you guys the feeling i had playing those chapter story is totally topnotch. but Rockstar did smth special here. they didnt just make this story epic. they made it very emotional. you know over the years i played enough games. and tbh i am kinda confident about myself that i am a decent gamer. so i played enough emotional games by now. but i have never ever played anything like this ever before. there was a moment where i put the controller down and i just watched whats happening and my tears coming down from my eyes automatically. after a while i paused the game to stop this. (cause nobody should see me like this you know) but couldn’t managed to stop my tears. you guys might say i am overreacting or saying “too much” but its not like that. the story is THAT good guys. Rockstar nailed it big time here. so those who have console they should start the game as soon as possible without thinking twice.

I am really happy to say that to everyone that yah RDR 2 is my most fav game of all time !!! (till rockstar make smth more epic than this)

Also, did you know you can unlock fast travel pretty early on by upgrading the camp? I enjoyed all the horse riding because of exploration and tangling up with side missions on the way to my main marker, BUT, there was also fast travel if I wanted to use it.

I’ll pick it up when its 20 bucks or so. It was a snoozefest when I tried the game for the first time.

yes i unlocked it very early. i was exploring a lot actually. more than usual people. upgrading all the items in fence traper then also the camp also camps cosmetics by hunting

How early is early for you? Because I did play it for about 4 hours and was bored to death. When does the game start “opening”?

It is a long and slow tutorial, everyone I know who has played it agrees… it made me sad and set a bad tone for the game… then it opens up and it turns into a quality experience. Just gut through it.

you have to finish till chapter 2

I hope there’s optimization patches before I get to this!

They had a year and some to optimize the game. Do you really think they’ll optimize it now lmao

They had a year and some to optimize the game. Do you really think they’ll optimize it now lmao

Maybe, they seem to be following the same monetization path as GTAV and people still play that today.

Finished it tonight. I 100% got teary eyed. Probably the best story I’ve experienced in a video game.

If you take it seriously, yea. If you just go around shooting every civilian and being insane, probably not

Yeah the ending of that game carries itself so well. The events leading up to the end do a really good job at setting the tone of the ending. That’s about as much as I can say without getting into things that would spoil the ending.

If you take it seriously, yea. If you just go around shooting every civilian and being insane, probably not

Haha yeah I never thought about that. I was fully invested at that point and was playing into the redemption arc come the end of the game. There would be a pretty big disconnect if I was just going around robbing and murdering people between those final missions.

Finished it tonight. I 100% got teary eyed. Probably the best story I’ve experienced in a video game.

Looks like you haven’t played Chrono Trigger or any of the Yakuza games.

Yeah, my brother just holds himself up in the blacksmith shop and kills every law man for 2 hours at a time. He’s finally listening and starting to take it seriously. He has a long way to go on his moral meter, so he is actively getting every citizen possible to boost it lol. Now, go play Days Gone. Trust me it’ll help coming off of RDR2

I need to finish the story mode. I made the mistake of jumping to online during Christmas just to make sure to get some of the seasonal stuff, and end up playing that part now when I have the time.