STAR CITIZEN - all about SC :D

I love this game and fan videos.

What is the actual genre of Star Citizen? I still can’t figure it out XD

Squadron 42 is single player Wing Commander space sim opera type of game.
Star Citizen is Space Sim, RPG, MMO where you can choose what you want your character to become ( marine, space trader/trucker, explorer, miner, bounty hunter, pirate, racer or all of it ).

It’s a first person game where death is pretty important segment of the game. You don’t die instant. Instead you get treated at medical facility. After several treatments your character’s body is beyond repair and will die.
Then you’ll have the option to start anew or to create successor (with lost reputation but with the inventory of the deceased one).

You can play solo in your single seated ship, or with friends and other players on bigger multi crew ships.

If your ship gets destroyed you loose it unless you have insurance which will then provide you with the same ship but only stock version. You’ll have to equip it again.

There will be 100 systems to operate through and explore, though not all 100 will be available from the start.

The planets will be procedurally generated with the options of planetary landing. Some landing zones on planets will be hand made, but you’ll have the option to land on any spot on the planet, do mining, collecting, etc.

If you have more questions just ask.

I am patiently waiting on this game!

I have an Origin 315p Explorer version, with lifetime insurance, sitting in my hangar.

So basically that game is everything haha. How much does that luxury cost? XD

Minimum, around $45 I think, for the base game. Not sure if you have to buy a ship after that, for multiplayer. If so, they start at around $45. Again, I think

But, you can go way more than that, depending on which spaceship (s) you want. Some spaceships are up in the thousands. really.

Zmajuga probably could answer this better.

All these modules will be combined in a full game.

Credits are earned ingame so it’s not “pay to win game”. All ships can be acquired ingame so no need to spend money on more ships unless you want to support game development.

If some of you decide to pledge and enlist here’s my referential code: STAR-QNFR-53T4.

It’s a mutual win. You get 5000 UEC more to spend, I eventually got gift too.

I’ve had Start Citizen for a while now, but when I logged in last I couldn’t find my damn ship. Tbh, I typically end up confused and logging out after about twenty minutes

demons6i6x
Everything is fine. It’s just that new Item system 2.0 is implemented. It all works through MobiGlass.
Go to the middle of hangar where ship used to be. There is a blue dot on the floor which you can click on (showing which class of the ship can be spawned there) . It will open the ship menu to choose which ship to spawn.

demons6i6x said in STAR CITIZEN - all about SC including Bulheads

BTW What’s your ingame nick. I want to add you to friends list. Mine is ZeRobot.

Zmajuga said in STAR CITIZEN - all about SC including Bulheads

demons6i6x said in STAR CITIZEN - all about SC including Bulheads

BTW What’s your ingame nick. I want to add you to friends list. Mine is ZeRobot.

Probably Demons6i6x, but I’ll have to check when I get home

Is this finally out yet? I backed it on KickStarter years ago and stopped following it…

teh_g
It’s in early alpha, but great for some space shenanigans.

Bugs and glitches will occur but you can sense what the game will feel when it’s done.

teh_g said in STAR CITIZEN - all about SC including Bulheads

Is this finally out yet? I backed it on KickStarter years ago and stopped following it…

in other words, no.

Zmajuga I currently don’t have it installed, but it will make it back on my newer game drive eventually. But my name on there is polekatt, if you want to add me too!

I think I’ll get this once it’s in beta or something. Need to finish the games I own first. From the videos I saw, the game looks amazing. I love space battles or anything connected with space and futuristic stuff. That’s why I’m drooling over COD IW, Titanfall 2 and Mass Effect: Andromeda haha

Katsuo
If you ever wish to try it out, I have a spare account. I keep it for my brother, for when he gets a rig that’s able to run it

.
Meanwhile I use it for my friends to try it and see what the SC feels like. 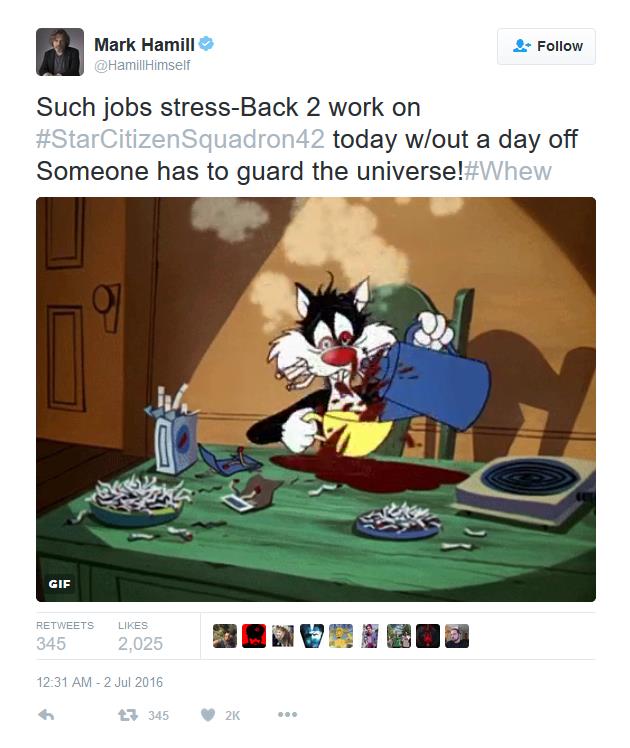