It took me a while, but I managed to finish Final Fantasy IX. It was my first time playing it. It lived up to my expectations of a Final Fantasy game. The PC port has some pretty annoying bugs though. Every once in a while when a fight started, the screen would just go blank… Luckily it isn’t cruel and it saved at most screen transitions as a checkpoint.

katsuo I was going to finally play The Witcher 3, but I can play FF VI instead

FF VI is a little shorter though. Only 40ish hours!

FF VI is a little shorter though. Only 40ish hours!

Only if you super rush it like I did. I still would prefer to go with TW3 first. That game is amazing. Especially the DLCs. Much better than the main story.

Luckily my mom really enjoyed Horizon last time she was here, so I just finished Horizon Zero Dawn and the DLC.

teh_g I don’t like Horizon. I got a platinum but I didn’t like the game. Not sure why. Probably because the characters were so boring or the enemies are pretty much the same in every area. The combat was super fun tho.

My journey of my mom liking video games continued with Uncharted Lost Legacy.

teh_g that one was goooood

I finally finished Pyre. I’d give it a solid 7/10. The gameplay was really fun, but it left a little to be desired. The music was stellar and the artwork was really cool. Took about 10 hours to beat.

I beat God of War. It is a true 10/10 game. Probably one of the best I’ve played in some time. The combat felt amazing, the visuals were stunning, the music great, and the story was awesome. Despite it being open world, I didn’t feel like I had chores to do with the side tasks. Now to wait five more years for a sequel.

Another game I beat. I’m trying to work through gifts finally, since I feel about about people buying me things and me never playing them.

I just finished Vanquish (I think @ShiftySatchmo got me that one). It was a solid action shooter. The story was… weird? I’d definitely play another one if/when Vanquish 2 comes out. It was a smidgen over 6 hours of out of game time, and about 4 hours and 13 of mission time. 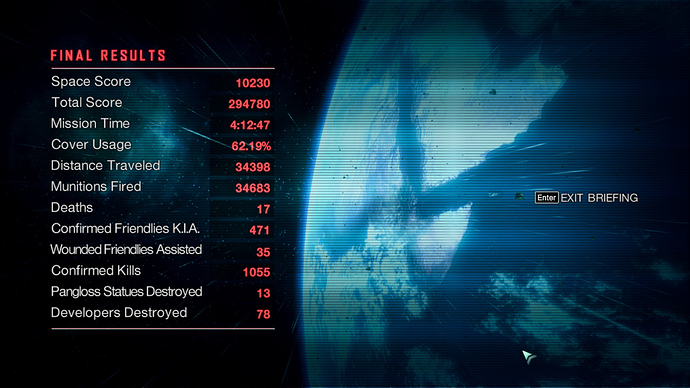 Finished Bayonetta 2. I love this style of game, it kept up with the last game and continued to be great. 9/10

Apparently I’m on fire today. Beat Owlboy finally. It was pretty good, I think the music carried a lot of it. The gameplay was nothing too special, and there wasn’t any particularly interesting mechanics. I’d give it a solid 6/10

I just beat South Park The Stick of Truth. The gameplay was pretty fun, it was a lighter version of Paper Mario. The timing based attacks and defense are really cool. I think I realized I’m not a huge South Park fan. I never really watched the show, and I like most of the humor, but there was some stuff that was a little over the top for me. Took just a few seconds past 8 hours in game time. I’d give it a good 5/10 on our scale. Nothing crazy.

I also do not. I wouldn’t even try that game. I’ve seen a couple of episodes that made me chuckle but overall eh.