[20200118164706] So this is my first finished game in 2020. Well, I finished the campaign in 2019 but that was not enough, I went back did a lot of bonus missions and conquers for achievements, but after 59 hours I can say I finished it. A very simple yet so fun strategy game. You manage a small number of villagers, workers and warriors to win by slaying the enemy or achieving one of the victory conditions. During your play you will be strike with hunger, attacking wolfes, earthquakes, steali…

So this is my next game. Or was. Finished it tonight. RTS strategy game with viking and late first millenium theme. Base and resource management, capture the point system like in Company of Heroes and Dawn of War games. 30 HOURS LONG campaign missions, 40 missions total without the DLC, fun and great missions and maps, liked every minute of it, it was not boring because every 10 is with a different faction. There are skirmish maps as well with friends or AI. Pretty decent rts game, …

[20200224220705_1] [20200224220758] Finished it, awesome game, I am really into the lord of the rings world and lore right now, watched all movies, hobbits and all and now looking for decent books. Very well made game. I know it was an awful cashgrab with the loot boxes but I only bought it after they revomed it. Base game is long, huge, interesting story, first dlc as well. The second one with Berenor is a bit wierd with the rogue like gameplay and without a ring of power but decent enough t…

[Screen_05-03-2020_16-45-45] I wishlisted this game when it released, how did i miss it since then? A steampunk city management with brutal decisions. Stressful and sometimes annoyingly hard. The first mission seemed so impossible on my first or second or third run, but the game teaches you perfectly how it went suddenly and horribly wrong, what should you watch out next time. When you finally survive the first scenario and think you mastered everything, you get even harder missions. Finished …

It was time to create its own topic, a lot of people playing it, @schlitty finished it, @Zmajuga and @Katsuo still playing it. All I can say is I loved it from the beginning to the end. The facility part of the game is a very well made remaster, while honoring the original material and only tweaking minor things like the rails are no longer damaging you with electricity making the entire railway section less annoying. Xen is a total remake with a lot of good sections and beautiful visuals but a…

Finished World War Z with friends during the quarantine. It was free and a coop game so never a better time to play it. Very similar to the Left 4 Dead series, I mean really, really similar. One primary, one secondary and one melee weapon, 4 people in a group, a buttload of basic zombies and some special zombies. A Left 4 Dead game in third person. There are some annoying bugs, connectivity issues or stuck npc characters but nothing a restart could not fix. The campaign is okay, nothing special,…

Finished it as well. 6 minutes before the end of the free weekend. Hard journey, I onlyy stopped eating, 9 hours today, some before. It was a pretty fun campaign, could be better with friends. The game on Steam supports remote play so I guess you need to buy only one copy and stream it to the others and they can join the fun. Story was acceptable, action better, visuals and bugs and the AI worse. Zmajuga’s score is valid.

Finished it. The campaign is around 25 hours long, fun to do it once but don’t expect much. The usual xcom turn based game with unusually more bugs than in the base game which is wierd because it uses the same engine, assets, maps etc. New gameplay elements are the breaches before each encounter and the introduction of turn order. Not my favourite parts, breaching is fun for the first couple of hours then it is just a neccessity. XCOM dared to explore new options which i respect and it done a go…

I don’t want to start a new topic for The Council because I know a lot of you will not play it so i just write a short review here for it. It started pretty slow but interesting, episodee 3 was the peak in quality, story and writing. Ep 4 and 5 contains a lot of puzzles which are 1) Hard af 2) I am baked most of the time during the game and i am stupider by the minute 3) the puzzles are complicated, i mean i needed the famous yellow legal pad to write notes because i was lost and confused 4) i …

Finished the game during the free period on Steam. A bit rushed 20 hours, wanted to reach the end, avoiding spoilers for ayear was hard. When it is cheaper and has a goty edition i will buy it with friends and do it properly. The gunfight was great, the story meh. BL2 is still the favourite but it is not bad, Epic users betatested it well, the game only crashed when i created 300+ weapons in a room with my eridium gun. Not as fun as with friends that is for sure. And btw stop selling legendarie…

Not opening another topic for Gears Tactics, because I only recommend it you are hardcore Gears or turn based strategy fan, preferably both. The bossfights are great, the story missions are good. Side missions are obligatory which are the negatives of this game. All are the same, 3 types, same maps, becomes repetitive and boring fast. Do not spend money on it, it is in the game pass.

What do you mean?

This is what I see: 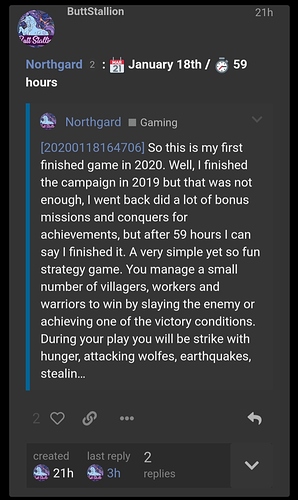 That’s how it appears for me as well. Isn’t it supposed to look like that?

I just copied the Northgard topic link, this is how it looks. If you open the window down you can even see the entire review without opening the other topic.

Looks like a quote but maybe it’s a preview?

Looks like a quote but maybe it’s a preview?

This is what he gets for trying to make @gord0 happy

I have an idea or two what could make him happy

I just woke up when I saw it, looked like an accidental self quote at the time.

I was confused by it too.

I don’t want to start a new topic for The Council because I know a lot of you will not play it so i just write a short review here for it.

It started pretty slow but interesting, episodee 3 was the peak in quality, story and writing. Ep 4 and 5 contains a lot of puzzles which are 1) Hard af 2) I am baked most of the time during the game and i am stupider by the minute 3) the puzzles are complicated, i mean i needed the famous yellow legal pad to write notes because i was lost and confused 4) i am a noob. Either way that was my main issue with the game. The face animations were ME Andromeda level bad but the voice acting made it okay. I had some random bugs with lighting and random appearing models but nothing annoying andd game breaking.

The main positive point for this game is the ending. Because during the five episodes your choices really matter not like in a Telltale game. It has 16 endings i could find. Of course they are alterations of 3-4 main endings but still. You miss an item or conversation in ep2 and boom you already have a different ending. Loved this. I won’t rate games this year but anyone who wants an evolved telltale experience with some occultism, puzzles, some chat with Napoleon or Washington, give it a try. Or until the end of episode 2. You will know by then if its worth playing.

BTW Episode 1 is free on Steam

I visited the steam page to see what the game was because I couldn’t remember. It seems I already ignored it lol. 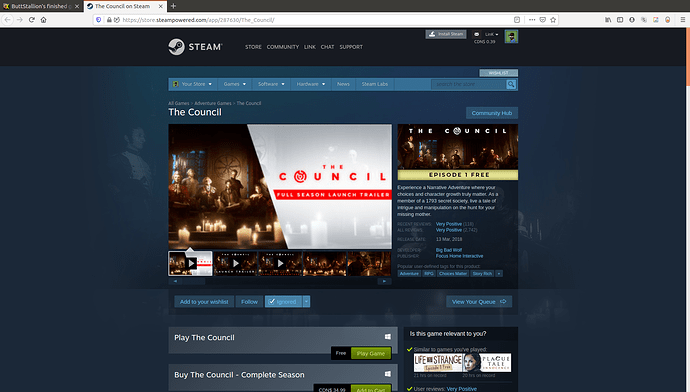 Well it is surely not for everyone. I ignore all asian/japanese games